Within the agreement on the normalization of economic relations between Belgrade and Pristina, which was signed in Washington last week, it was agreed that Serbia would move its embassy in Israel from Tel Aviv to Jerusalem. It was this part of the agreement that triggered many reactions that has only created a greater rift between the US and the EU in the Balkans.

According to the document that Serbian President Aleksandar Vučić signed with Pristina and Washington, Serbia will become the first European country to open an embassy in Jerusalem. Israeli Prime Minister Benjamin Netanyahu and US Senator Ted Cruz were among the first to welcome the decision by Vučić. Netanyahu said that efforts are continuing to persuade other European countries to do the same and thanked US President Donald Trump for his contribution to that achievement. Senator Cruz said that he welcomed the move for Serbia to open its embassy in Jerusalem.

“I applaud President Vučić’s announcement that Serbia will be the first European country to open an embassy in Jerusalem, the capital of our ally Israel. We discussed these issues when we met in March and as I told him, Serbia is a mutual ally. This step deepens ties and I look forward to more such moves. On the other hand, completely different messages arrived from the European Union and Palestine,” Cruz said in abbreviated format on Twitter.

On Monday, the EU expressed “serious concern and regret” over Serbia’s decision to move its embassy in Israel. Muslim-majority Kosovo, which only has partial international recognition, also agreed to normalize its ties with Israel, including the establishment of diplomatic relations. Kosovo’s president, Hashim Thaçi, said on Twitter that Kosovo “will keep a promise to place its diplomatic mission in Jerusalem.”

The potential move by Belgrade and Pristina are contrary to the EU’s official policy that the status of Jerusalem should be worked out between Israel and the Palestinians as part of peace negotiations. European Commission spokesman Peter Stano said that for Brussels, the issue of moving embassies to Jerusalem is a bilateral announcement by Serbia towards Israel, emphasizing that the EU’s position is known and has not changed.

“There is no EU member state with an embassy in Jerusalem,” Stano said. “Any diplomatic steps that could call into question the EU’s common position on Jerusalem are a matter of serious concern and regret.”

Stano added that “since Kosovo and Serbia identified EU accession or EU integration as their strategic priority, the EU expects both to act in line with this commitment, so the European perspective is not undermined.”

Serbia has officially been an EU candidate country since 2012. Kosovo since 2013 has an association agreement with the EU since bloc members Greece, Cyprus Spain, Slovakia and Romania do not recognize Pristina’s independence. As both Belgrade and Pristina have aspirations for EU membership, diverting from official policy regarding Israel and Palestine has only angered Brussels. However, contradictions appear considering all EU members bar five recognize Kosovo’s independence, highlighting that the mythology of a united European foreign policy is fallacy, especially at a time when EU members disagree on how to deal with Turkey that is threatening war with Greece and Cyprus.

Rather, Brussels has been humiliated by US President Donald Trump, who, from his perspective, has achieved a powerful foreign policy victory just weeks out from the upcoming US elections. Although speculation was rife that the US was losing influence in the Balkans to the EU, particularly in Kosovo, the deal to open economic relations between Belgrade and Pristina, while adding extra recognition to Israel’s claim that Jerusalem is its eternal capital, has shown that Washington is not willing to give up its influence in the Balkans to the EU so easily.

None-the-less, Palestinians are expectedly enraged by the decision made by Belgrade and Pristina towards Jerusalem, with the Palestinian Authority threatening to sever diplomatic relations with any country that moves its embassy to Jerusalem. The Secretary General of the Palestinian Liberation Organization, Saeb Erekat, who was the main peace negotiator with Israel, announced on Twitter:

“Palestine will sever its relations with any country that will move or open its embassy to Jerusalem. We urge all nation states to abide by international law, including Security Council Resolutions 478 and 2334. Violating international law is a sign of weakness, not strength.”

Despite this threat from the Palestinian Authority, it appears that Bosnia and Herzegovina (BiH) could be the next European country to move its Embassy in Israel to Jerusalem. Although BiH applied for EU membership in 2016, the Serbian member of the rotating Presidency of BiH, Milorad Dodik, stated that he would send a request to the Presidency that the Embassy of his country should be moved from Tel Aviv to Jerusalem. BiH has a rotating presidency between the country’s three main ethnic communities – Serbs, Croats and Bosnian Muslims. Although Dodik is an ethnic Serb that wants to follow Belgrade’s lead, it is likely that the Bosnian Muslim member of the presidency will vote against moving the country’s embassy to Jerusalem, while it is not known exactly how the Croat representative will decide.

Although Serbia and Kosovo are not EU members, the decision to move their embassies will not only strengthens Israel’s claim to Jerusalem, but it also puts Belgrade in a more favorable light in Washington’s view. The EU worries about such a move as it not only undermines their authority over Serbia and Kosovo, but the moving of their embassies could potentially see BiH and even Albania follow in Belgrade’s and Pristina’s footsteps. The EU does not have as much control over the Balkans as they thought, and Trump’s surprise deal between Belgrade and Pristina demonstrates this. This has certainly been a foreign policy victory for Trump, and just in time for the lead up to the November presidential elections.

As everywhere else, EU authority is subordinate to USA!Every time, EU steps out of the line it has to stand in the corner!

The EU is incompetent and corrupt. While the USA has a recognised swamp in WA DC

the EU has several swamps across its city territories.

The only way to describe the EU is in the context of its record.

For example: the EU has “lost” Euro 15 billion of tax payer money in KIEV.

Another example: the recent judicial proceedings in Bratislava.

Moreover they have pathological hatred of Slavs.

Now the Austrians are hiding under the “neutral” UN flag.

Should we trust them? 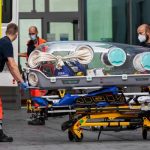