Berlin and Brussels have criticized the White House sanctions. accusing President Trump of interfering in national and bloc sovereignty.

US sanctions targeting the Nord Stream 2 gas pipeline between Russia and Germany became law on Friday evening after President Donald Trump signed off on a massive defense bill.

The sanctions target companies involved in constructing the $11 billion (€9.93 billion) energy project, which will transport Russian gas under the Baltic Sea and deliver it directly to Germany.

The Trump administration now has 60 days to identify companies and individuals providing services for the pipeline. The sanctions allow Washington to revoke US visas and block the property of these individuals. Those targeted by the sanctions would then have 30 days to wind down their operations.

One of those companies, Allseas of Switzerland, which is laying the pipeline, announced just hours after the sanctions were signed into law that it had “suspended its Nord Stream 2 pipelay activities.”

On Saturday, the group behind the pipeline said it would aim to complete the project quickly in an effort to minimize the damage of US sanctions.

“Completing the project is essential for European supply security. We, together with the companies supporting the project, will work on finishing the pipeline as soon as possible,” Nord Stream 2 said in a statement. 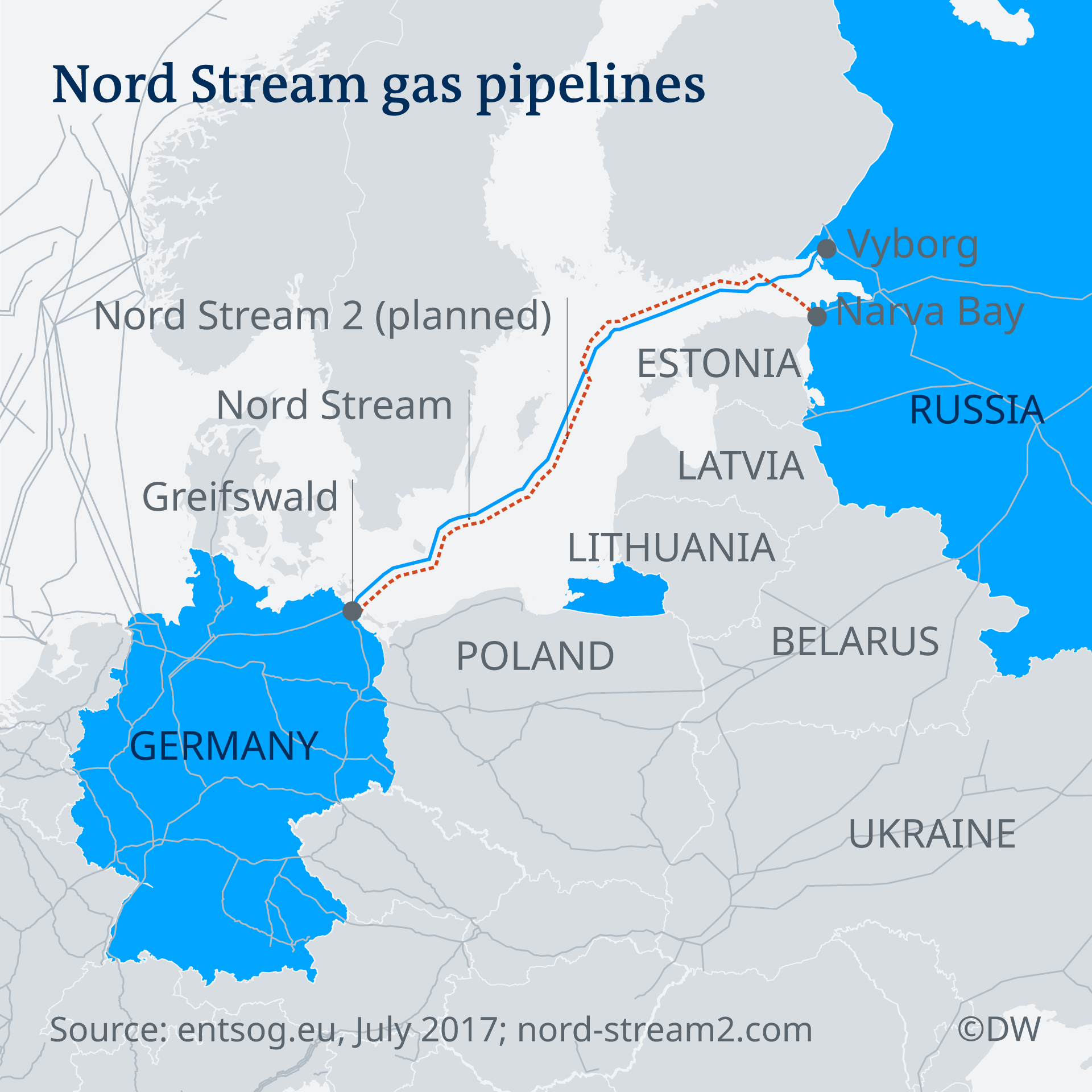 ‘A severe intervention in German and European internal affairs’

The bill describes Nord Stream 2 as a “tool of coercion and political leverage” that Moscow could use against Berlin — and says it risks significantly weakening US ties to Germany and other European allies.

US lawmakers in both houses of Congress overwhelmingly approved the sanctions.

German Chancellor Angela Merkel’s government has condemned the measures, urging the US not to meddle in European energy policy. “They affect German and other European businesses, and we see the move as meddling in our internal affairs,” a government spokeswoman said.

The sanctions are also opposed by the European Union. A spokesman slammed “the imposition of sanctions against EU companies conducting legitimate business.”

Russian President Vladimir Putin has already vowed to continue with the project and has threatened “reciprocal” measures. Russian Foreign Ministry spokeswoman Maria Zakharova accused the United States of pushing an ideology that hindered global trade, adding on her Facebook page: “Soon they will demand that we stop breathing.”

Ahead of the sanctions being signed into law, Swiss-Dutch company Allseas suspended its pipe-laying activities. The company was hired by Russian state-owned energy giant Gazprom to build the offshore section.

The pipeline was expected to become operational in the next few months, although the completion date for the project has now been thrown into doubt.

The Moscow Times: (…) HOW CAN RUSSIA COMPLETE THE PROJECT? In 2016, Gazprom bought a special pipe-laying vessel called Academic Cherskiy to be used as a last resort if European companies stopped working on Nord Stream 2. A Gazprom source said Cherskiy’s average pipe-laying speed is slower than the Pioneering Spirit (owned by Allseas) but did not provide a specific estimate. According to Refinitiv Eikon data, Cherskiy is currently based in the Russian Pacific port of Nakhodka. It would take about 45 days for Cherskiy to reach the Bornholm area via the Suez Canal or about 37 days using the… Read more »

Thanks for that Olivia – useful additional information. I imagine that now Ukraine is playing ball, completion of Nordstream 2 is less urgent. I suspect that Alexander is being unduly optimistic in thinking there will be a deal with the US – they have locked themselves into the madness. For Germany, incidentally, an much closer relationship with Russia makes a lot of sense. I may say more on this on Bitchute – I think we should all follow Alex’s hint that this is where the action will be in future as more and more free spirits abandon YouTube before they… Read more »

You just need to click on the relevant link in the article. I now look at both as they have different comments – also I think the Duran may get credits in Bitchute whereas YOUTube has demonetised them – perhaps Alex can correct this on his next broadcast if I am wrong? Anyway, Happy Christmas to you, Sylvia, from another ‘dissident’ – drinking tea from his new Duran ‘Russian Bot’ mug!

My name is Olivia, and I am not really a “dissident”. I am a Russian nationalist. I’ll try Bitchute to see what the different comments say. Happy Hanukah, merry Christmas and a very good new Year to you, too.

Allseas is in reality Dutch with its HQ in Switzerland. This was about making Trump look tough and to help Ukraine in its negotiations with Russia over future gas supplies. The agreement expires on 31/12/2019. Without Nord stream 2 Russia risks not being able to service its EU clients for a few months. No coincidence Russia has just accepted a five year deal, so Trump can claim a win. But, quite true, time is on Russia’s sidee and they really don’t care about US silly tricks.

There are no worries about Russia not able to service it’s customers, all gas storage facillities at all suppliers are full and the winter is mild (at least here in Germany) they done this because of the deliberately facilitated delays by Denmark on behalf of their US pimps….most saw some kind of US Mafia-Style shenanigans and Economic/Financial Terrorism coming and it will fail. What’s next? Open acts of State Terrorism or a Shooting War? With the deluded Americunts you must expect every kind of fascist stupidity.

So, Europe is soon to have Nordstream 1 & 2, Turkstream PLUS the old Ukraine and Poland transit PLUS Russian LNG thanks to all those new LNG terminals in Europe’s works.

In other words, the US effectively seeks to wean Europe off Russian gas by flooding Europe with Russian gas. About par for the course of American policy worldwide, I’d say.

Hmmm. Wonder why Germany doesn’t also complain that the 4% GDP the US spends on NATO to protect them from those same Russians they want to buy gas from isn’t “interfering in national and bloc sovereignty”?

Germany does not need protection from the Russian neighbours. Russia has never invaded Germany yet, in contrast to the German Nazis, who invaded Russia, in 1941, doing a lot of damage to Russians in the Great Patriotic War (1941-1945). Wherever you live, it is worth while to study the history of Europe and Russia in the 20th century. Germany has received gas from Russia for many years. This is nothing new. If the US would stop spending 4 percent GDP on NATO and would give up the idea that NATO is needed, most Europeans – including the Germans – would… Read more »

To be honest Olivia, Russia today is not a threat to anyone. But, the Soviet Union in 1941 was planning an attack on Europe after the Western Allies exhausted themselves in warfare. The quickness of Germany’s victory over France and the British Expeditionary force in 1940 threw Stalin’s plans into disarray and he planned the invasion for late summer 1941 and early fall at the latest. Hitler’s preemptive strike actually saved Western Europe from the horrors of Communist tyranny.

Germany should kick US occupation forces out their country forthwith.

Yes, but the Germans are not strong enough to do so. Germany has been an occupied country since 1945. And it is still occupied today. They might be able to get rid of the US yoke eventually with Russian help. Receiving cheap gas from Russia is one step towards freedom.

Yes, they should, but, Germany is still an occupied nation. And, the Quisling Zionist government of Angela Merkel is destroying this once beautiful and strong country.

We need to call things by their proper name: not “sanctions” but pure and simple BLACKMAIL.

American or should I say Neocon bullying will not work. Nordstream 2 will be built. It’s all a matter of common sense vs. idiocy.