Obviously, the issue of causality is not well-known to EU leaders, because in their make-believe world you just wish things and they magically appear out of a thin air. The fact that actions have consequences is too difficult for them to grasp.

Power and gas prices are hitting fresh records almost daily, and some energy-intensive companies have temporarily shut operations because they’re becoming too expensive to run. As winter approaches and Europeans start to turn on their heaters, the squeeze will intensify, pushing more executives into tough decisions about keeping plants open. Ammonia producer SKW Stickstoffwerke Piesteritz GmbH is among those that’s been forced into drastic steps. The German company, which burns through 640 gigawatt hours of natural gas each year, equivalent to about 50,000 households, said Tuesday it will cut production by 20% to offset rising gas prices. “It doesn’t make sense to make ammonia at these price levels,” said Chief Executive Officer Petr Cingr. “A complete production stop looms if the government doesn’t act.” On Wednesday, the European Union issued a fresh warning and said it will outline measures including tax cuts and state aid that governments can use to help. “This price shock cannot be underestimated,” EU energy chief Kadri Simson said. “If left unchecked, it risks compromising Europe’s recovery.”

At this stage it doesn’t matter how one tries to rationalize this clusterfuck but you can bet your ass on Russia, in the end, being blamed for all of it, including bad education of European “elites” who have no grasp of the modern world and how it operates. I say, go even greener, that will show them all how to run any country…into the ground. Yet, morons remain (and will remain) morons.

Already hurt by coronavirus lockdowns, many of Germany’s smaller firms decided against securing long-term energy supplies earlier this year and can’t afford to catch up now as gas prices are so high, according to Andreas Loeschel, professor of resource economics at Ruhr-University Bochum. “So much depends on the the demand side of the equation,” he said, referring to the potential for a colder-than-expected winter. “A number of unlikely events are building up to cause a situation we’ve never seen before.”

No shit! I have a question to this “professor”–has it occurred to him that there are such things in the world as “contingency planning”, “good engineering”, “sound energy policies” and other things of this nature which are called in the world of normal people “preparedness”. No? Never heard of it? Obviously not, because in the world of European in general, and German in particular, totalitarian politics loyalty to ideological radical orthodoxy of “Green Energy”, LGBTQIRS madness which fill in the voids left by serious professionals and scientists who do not want to fight (I don’t blame them) human insanity, is more important than seeking the truth.

One would expect this in a third world but when one of the top 10 German universities produces such “specialists” in, and you may have guessed it already, “economics”, what do you expect?

Translation:  Good exam grades are said to have been sold for cash at the University of Duisburg-Essen. The public prosecutor of Essen is investigating “into the area of corruption offenses,” said a spokesman for the authority. For tactical reasons, the public prosecutor did not want to give any further details “at this point in time”. The university itself filed a criminal complaint. With around 40,000 students, the University of Duisburg-Essen is one of the ten largest German universities. According to information from the “Westdeutsche Allgemeine Zeitung”, it is about exams for the Faculty of Economics. The investigation will be carried out against an administrative employee of the faculty located on the Essen campus and against around 50 students. These are said to have given the clerk 800 euros each in cash so that she can turn a failed exam (grade 5) into a passed exam (grade 4) in the university’s computer system. The investigation was triggered by an anonymous tip.

I think those 50 students are the perfect candidates for the top political positions in Germany (and EU) and I am sure with such excellent backgrounds they will contribute immensely to furthering insane suicidal economic, foreign policy and cultural agendas born primarily in the deep recesses of the European (and American) radical left because of a difficulty of serious STEM education and a relative ease of a “humanities” one. Education in design and engineering of nuclear power station is much more difficult (orders of magnitude) than forays into the pseudo-scientific demagoguery of Derrida or the study of monetarism. Hence, more free time is allocated to radicalization and developing a desire to destroy anything good, productive or beautiful. It is especially easy to do when it takes only 800 Euros to get a passing grade in the subject which is not even real economics as Michael Hudson (correctly) describes.

Yes, and that is why Europe is going down, while China will pay ANY price for the resources which she desperately needs. In this, EU loses, China wins. Recall my table, China has a severe deficit of energy. Europe doesn’t want Russia and Russia doesn’t want Europe anymore, certainly not EU. Even Merkel concedes today:

(Bloomberg) — Outgoing German Chancellor Angela Merkel dismissed charges that Russian leader Vladimir Putin is partly to blame for the record spikes in European gas prices.  “To my knowledge, there are no orders where Russia has said we won’t deliver it to you, especially not with regard to the pipeline in Ukraine,” Merkel told reporters Wednesday. “Russia can only deliver gas on the basis of contractual obligations, and not just only like that.”

Europe did it to herself,  she made her bed, now she must sleep in it. Russia is orienting her energy towards China and Asia in general. Russia will work with European nations on a bi-lateral bases, such as recent contract with Hungary, and considering what modern European elites are, there are virtually no chances of normal relations between Europe and Russia, only minimal needed and Russia will hold her nose. In related news–nothing new:

Officials from NATO have reportedly decided to slash the size of the permanent Russian delegation working to build ties with the US-led military bloc at its headquarters in Brussels, revoking the credentials of eight envoys.

Same as this (…more) 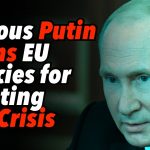