Christmas might be over for the western world, but it is never over in Bethlehem, Palestine, the birthplace of the global holiday.  There were many years in which churches there were locked on Israeli military orders, and the European and American tourists were prevented from a pilgrimage to the birthplace of their religion, while their countrymen back home in places like Bethlehem, Pennsylvania were singing songs and most likely feeling completely unconnected to Palestine.

The political conflict preventing peace and prosperity to Jews, Christians and Muslims in the Holy Land is still raging, and with no “Road Map” or “Peace Plan” in sight.

The Jews understand the conflict better than many, and the Jewish Voice of Peace organization tells the story like this: “The violence between Israelis and Palestinians is often falsely presented as a conflict between two equal sides with irreconcilable claims to one piece of land.  In reality, this is a conflict over territory between a nation-state, Israel, with one of the world’s most powerful and well-funded militaries, and an indigenous population of Palestinians that has been occupied, displaced, and exiled for decades.”

Officially the State of Palestine is a de jure sovereign state, which is officially governed by the Palestine Liberation Organization (PLO) and claims the West Bank and Gaza Strip; however, de facto administrative control over the 165 Palestinian enclaves in the West Bank is held by the Palestinian National Authority, while Gaza is ruled by Hamas. The territory claimed by Palestine has been occupied by Israel since the Six-Day War in 1967. Palestine has a population of 5,051,953 as of February 2020.

Palestinians across the West Bank have been recently protesting the beatings and conditions of prisoners, both females and males, who are kept in Israeli prisons, without trials, charges, visits or even a toilet. Three Palestinian women held in inhumane conditions in Damon prison in the North were beaten and sustained injuries.  Shurooq Dwayyat, Marah Bakir and Muna Qaadan  were among those women injured according to a statement by the Palestinian Prisoners Society (PPS) monitoring group.

After the news traveled to Nafha, a male prison in the South, violence broke out in response. The section where the violence took place was raided by Israeli special forces who took 80 prisoners out of their rooms and handcuffed them for hours in the freezing cold, while beating some severely.

“We discussed the implementation of economic and civilian measures, and emphasized the importance of deepening security coordination and preventing terror and violence — for the well-being of both Israelis and Palestinians,” Gantz said.

“The meeting dealt with the importance of creating a political horizon that leads to a political solution, in accordance with international resolutions,” Palestinian civil affairs minister Hussein al-Sheikh said.

Israel’s coalition government led by Prime Minister Naftali Bennett was formed in June, and the former head of a settler lobby group who opposes Palestinian statehood, underlined that there was no peace process under way with the Palestinians, “and there won’t be one”.

Gantz announced on Wednesday, a day after meeting with Abbas, that he authorized “a number of confidence-building measures,” including 100 million new shekels’ ($32 million) worth of tax payments that Israel has been withholding from the Palestinian authority.

Approval of residency status to about 9,500 Palestinians in the Israel-occupied West Bank and the Gaza strip and travel permits to select Palestinian businessperson was included in the package.

Tor Wennesland, UN Special Coordinator for the Middle East Peace Process, urged the UN Security Council to take action on the situation in the West Bank and Gaza.  He said, “recent developments on the ground are worrying”, pointing out the challenges faced by the Palestinian Authority.

“I therefore emphasize again the importance of concerted efforts by the parties to calm things on the ground. I am concerned that if we do not act quickly and decisively, we risk plunging into another deadly escalation of violence”, he warned.

He listed the deaths of four Palestinians, including two children, and injuries to 90 others, including 12 children, all at the hands of the Israeli Security Forces.

“Ongoing violence and unilateral steps, including Israeli settlement expansion, and demolitions, continue to raise tensions, feed hopelessness, erode the Palestinian Authority’s standing and further diminish the prospect of a return to meaningful negotiations,” he added.

Of special concern was the attacks on Palestinians by Israeli civilians in the occupied West Bank, reiterating that “that all settlements are illegal under international law and remain a substantial obstacle to peace,” he said.

Concerning the Gaza strip, the Special Envoy said that humanitarian, recovery and reconstruction efforts continued, but said that the economic, security and humanitarian situation “remains of serious concern.”

In the Palestinian village of Qaryout, Jewish settlers broke into one house and tried to abduct a resident, Wael Miqbel, according to Daghlas.

The world now mourns the passing of Archbishop Desmond Tutu who recognized the similarities in the treatment of Black South Africans and Palestinians under Israeli occupation.  Tutu visited Israel’s Religious Affairs Ministry in 1989 and was greeted with a banner “Tutu is a Black Nazi pig.”

“I cannot myself understand people who have suffered as the Jews have suffered inflicting the suffering of the kind I have seen on the Palestinians,” Tutu said during the visit. Tutu’s presence was felt in occupied Palestine at the height of the First Intifada, and he remained in solidarity with them.

Tutu wrote plainly in 2005, “…the Israeli government is placed on a pedestal and to criticize it is to be immediately dubbed anti-Semitic. People are scared in the US to say ‘wrong is wrong’ because the pro-Israeli lobby is powerful – very powerful. Well, so what? For goodness sake, this is God’s world! We live in a moral universe. The apartheid government [in South Africa] was very powerful, but today it no longer exists.”

The South African Jewish Report, in 2014, published an op-ed piece that likened Tutu to Adolf Hitler and Joseph Stalin. The article was accompanied by an image of Tutu with a Hitler-style moustache and Nazi officers’ cap. 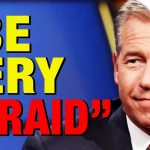