All things end. All empires end. All kingdoms end.

This is nothing new. After all there is this bit of wisdom from ancient times:

“Put not your trust in princes, in the sons of men, in whom there is no salvation. When his breath departs, he returns to his earth, in that very day his plans perish.” (Psalm 146, LXX)

This is forgotten about in every age.

“Happy (Blessed) is he that hath the God of Jacob for his help, whose hope is in the LORD his God: Which made heaven, and earth, the sea, and all that therein is: which keepeth truth for ever:”

So, here we are starting a geopolitical piece and old Seraphim is throwing Scripture verses at you all. Great start right?

Except that it is. Indeed, this is a very needed bit of perspective in order to properly place what far more secular people are admitting publicly themselves:

Joe Biden, Imposter-in-Chief (some people think he is the President): “We are at an inflection point.”

The term creation of the fair world order as expressed in the Shanghai Cooperative meeting is the same thing. The war in Ukraine itself is the present focal point of the North Atlantic Treaty Organization and its collection of views against the Russian “Civilization state” and its associated such states, China and India.

The problem is this: People in control like being in control, and they often really resist ceding that control. The unimaginable political and economic power of the unipolar world led by the United States is a hard thing to let go of, and for those who are in the very center of that power, people like Nancy Pelosi, Hillary Clinton, General Mark Milley and the Davos people, the World Economic Forum, Klaus Schwab and all the rest – they seem to be gripped by the delusion that they will be forever.

It is sad because those that have power will lose it, but often in so doing they cause a lot of destruction in their death throes.

This is particularly important because now, with the combination of the four referenda in the Donbass, Kherson and Zaporozhiye regions in Ukraine, Russia is very likely to expand that territory it considers its own, and the West is obviously condemning this as untrue.

Imposter Biden spoke forcefully (they gave him a lot of go-juice) in his UN General Assembly address about how Russia was to blame for the war in Ukraine, using the often-tried line of “big country attacking small country means big country is always wrong *except if the US is the big country*”.

His speech would honestly convince the person who does not know this situation as it really stands, which is why he said it. There are a lot of people who do not understand the reality of the situation – that Ukraine is the focal point of a proxy war between NATO and Russia, between the secularist West and the traditional, even Christian and otherwise religious East.

But the moral imperative of the United States as the City on the Hill is gone. The country is essentially in a state of cultural civil war, the country promotes utter depravity at the highest levels of its government, and advocates a drug-using, or heavily medicated, and perverse lifestyle with great enthusiasm across its political and media outlets, while doing its best to render Christians and those holding traditional living values to be at best “irrelevant” and more often “dangerous” to “freedom.”

When we do what is good, pure, selfless, helpful, and when we try try live according to a certain set of values that impose limits on our desires and passions, we do well, we have sanity, usually fairly good physical health, and balance in our lives and relationships.

When we don’t do this, when instead we live only to serve our wants, when we use people to satisfy our desires and don’t support others; when all life is a pursuit of pleasure come what may – we usually find that our relationships are mercenary, strained, really bad, and we are unhappy. If we compound this with drug use, we fall apart in all possible ways. If we exert our will for pleasure in the political, economic and social arenas, disturbance, distrust and outright war often result.

The United States was founded on the basis of a set of ideas: that there should be no taxation without representation in a government, such as was not happening with King George III at that time. It placed the liberty of all citizens as a unique gift from God alone, and not from human governments. It touted representative government, the right to bear arms and the right to be left alone (and to leave others alone).

These principles are not what the US stands for today – at least not at the levels of the ruling class. Instead, with the Biden Administration more than any other in our country’s history, the rulers seem intent to fill our leadership posts with the most vile people imaginable. Pete Buttigieg. Homosexual dad. Karrine Jean-Pierre – White House Press Secretary solely based on her LGBT bona fides. A Casper Milquetoast foreign policy team. Political call girl for hire as a vice president, and a Chief Executive who apparently runs on lemons or some kind of go-juice because while Mr. Biden often speaks well (and admittedly, he did quite well in the UN today), at other times he displays dementia and doesn’t appear to know where he is or what he is doing.

Basically, everything about the world-facing representation of who the United States is is perverted and unworthy of respect. The Russian leader is calling this out, but he is not the only one. Iran went to town on the UN General Assembly with all kinds of fairly legitimate complaints against American duplicity especially as regards foreign policy.

The Iranian leader the US might ignore and go on with its day. But the American people still largely consider themselves Christian, and the leaders of traditional Christian nations – Russia, Serbia, Hungary, and African nations are complaining about the United States.

The US is no longer a beacon of freedom. It is a nuisance, and a dangerous one. Its empire is ending, and because of this, we face great danger, because of the simple historical fact that empires tend not to end well.

All these conflicts (Korea, Vietnam, Iraq, Ukraine) include an unnecessary involvement of the US government. My eyes are opening wide thanks to astute and informed writers as yourself. I am amazed and embarrassed by my former ignorance. I appreciate all you do to pull back the curtain and let us see what is really going on. The truth of the Bible is non-changing and everlasting and a perfect addition to your article.

Sorry – This piece got published too fast by mistake. Look now. ))) Thank you!!

Please tell us the name of the painting and the artist that headlines your story on The Duran’s main page.
The scene is quite something!
Thank you!

Agreement so much to what you wrote. Other,[Torah-Tannach] like Daniel & prophets show “As went ancient Israel” [now a land’marking by central banking, the ancient concept heaven dared grant unto Mayer Roths family ideas -laSatans ploy under the satanic wisdom [but guided under God i.e. HaShem ] Religion, so goes Jesus ”questionable following.’today. So named Christianity is ended now being equative much with factions and sects, as longer standing Eber/Judaism and secular US NATO ararav-ism. Both religions fell away> sin entered in VIA ‘testing the Jews using Moses’10 etal then now some 613 not keepable mitvas / and churches for… Read more » 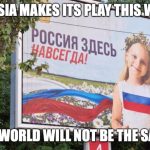 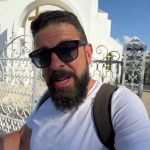