While much of the Old World is glued to its screens in eager anticipation of new heads at Euro 2020, which is a year late, a truly historic meeting between the leaders of the two superpowers, US President Joe Biden and Russian leader Vladimir Putin, took place in Geneva, Switzerland.
Despite high expectations, the sides were very cautious about the outcome of the talks. And they unexpectedly came to be quite encouraging.

The new relationships are close to a reset. For example, Putin described the meeting with his American counterpart as constructive and said that there was no hostility at the summit. At the same time, Biden stated that both Moscow and Washington are not interested in a new Cold War, which might escalate into a nuclear one. A joint statement by the two leaders was even adopted on the subject. This document declares the need for a comprehensive bilateral dialogue on strategic stability and a commitment to the principle that there can be no winner in a nuclear war and it must never be unleashed.

Meanwhile, unfortunately, we can see dangers. Not only has the new Cold War not yet been put to rest, but it continues to gain momentum. The recent statements and accusations against Russia at the NATO summit are proof of this.

The final statement of the alliance states that “Russia’s aggressive actions are a threat to Euro-Atlantic security”. Also, NATO believes that Moscow seeks to “undermine democracy around the world”. Behind this generally standard and long-standing language are more serious accusations and threats voiced by the alliance’s secretary general, Jens Stoltenberg. The latter promised to increase NATO’s military capabilities, including in Eastern Europe, and to use “a wide combination of different instruments” against Russia. Nor was it ruled out that Georgia and, in particular, Ukraine would join the North Atlantic bloc, which is completely unacceptable to Moscow and is clearly regarded as a threat to national security.

Stoltenberg did not ignore China either. While stating that the West does not want a “cold war” with Beijing, he accused China of military build-up, threatening behaviour and the use of new technologies, including facial recognition, to suppress democratic rights and freedoms. The alliance’s new strategic concept is expected to be adopted next year, with an entire section devoted to “Beijing’s security challenges” and countering them.

In addition, the NATO secretary general expressed satisfaction that alliance members had agreed to increase their military expenditures. It is important to recall that until recently, especially in countries of “Old Europe”, the insistent demands from Washington to increase spending on NATO’s military component to 2 % of GDP caused undisguised irritation and even opposition. Given the serious damage caused to national economies by the coronavirus pandemic, even Western economic giants such as Germany and France have been burdened by increased military spending.
By comparison, Germany’s military budget in 2021 will increase by 3.2 percent year-on-year to €53.03 billion. In France, back at the beginning of 2018, a bill was passed to increase military spending by 40% from €34.2 billion to €50 billion by 2025. According to The Military Balance 2021 yearbook, France’s military spending in 2020 in the midst of the COVID-19 pandemic was $55 billion (€46.1 billion) and was only slightly behind that of NATO’s main adversary, Russia, which spent $60.6 billion. Total military expenditures of the leading countries of the North Atlantic Alliance in 2020 were almost four times higher than total military expenditures of Moscow and Beijing.

What was the reason for the unanimous decision of the NATO countries at the last summit in Brussels to increase military expenditure?

Firstly, the change of power in the White House and the Biden administration’s demonstration of its intention to restore the unity of the global West, which had been badly shaken under Trump. For the liberal globalists still setting the European agenda, this is a very important signal for which they are prepared to sacrifice the national interests of their states and peoples.

Secondly, the confrontation with Russia and China. Its essence is to pedal and inflate the military, political and economic threats that allegedly come to the West from Moscow and Beijing which do not share “democratic values”.

To this end, the Atlanticist hawks have launched a whole programme built on unsubstantiated and sometimes completely absurd accusations of cyber-attacks, interference in elections, bombing of military warehouses, human rights violations and political persecution (which, in fact, is interference in the internal affairs of a sovereign state) and even the deliberate spreading of the coronavirus infection among their geopolitical opponents. And the widespread search in the West for Russian and Chinese agents, with the labelling of political opponents as working for the security services of Moscow or Beijing, is already reviving the worst features of McCarthyism. However, these facts are not true.

However, the main victims of these destrucrtive actions are ordinary European citizens. They can hardly feel safe while their governments are desperately stabbing a bear that is peacefully sleeping in its own lair, acting at someone else’s behest. Moreover, they have to pay from their own pockets for this dubious and extremely dangerous pleasure at the expense of social, health care and other priority and urgent items of the state budget in the conditions of a universal epidemic.

“However, these facts are not true.”

If they aren’t true, they aren’t facts. Another tedious article by Moore telling us what we already know. 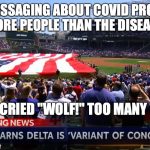 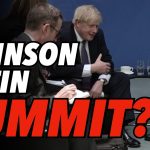