“If you don’t give me what I want, I will kill myelf!”, says the kid screaming at his parents over not having the keys to the car. He wants to go out and party with his friends, and his parents are not having it. It is Thursday, a school night, and he is to be home studying. He is sixteen, old enough to drive, but not old enough to be called an adult, much less treated like one.

“But I am going to kill myself and it will be your fault!!”

Usually, nothing. The human instinct to preserve one’s own life is so strong that it is difficult to actually follow through with a threat against one’s own life. And the kid is presented with this dilemma if the parents present it. The kid also knows his game is called, and he has a choice: to stop with the games or actually stab himself. Ego fights for him to stab himself, but self-preservation usually wins in such situations. However, in the event he does stab himself, the game is also up, because then the parents rush him, take the knife away, and he goes for a nice trip to the mental ward of the hospital after being treated for whatever damage he might have done to himself. It is usually not much.

The threat of violence is a temper tantrum just like what we have read above. The power of the threat is the way it works on emotion of others. It is usually not manifest in actions.

However, if a large enough group of people are so energized into hysteria, then violence does break out, and if that group is organized enough (a difficult thing to do with hysterical people, but possible), then it can lead to revolution.

However, like the hysterical kid trying to get the car keys, there is no way to appease the hysteria by giving the kid what he wants. Similarly, in the day’s new threat of arson and violence if a new Supreme Court Justice is nominated and confirmed before the November Presidential elections, there is no way to appease these threats. Doing so only emboldens the violent forces to do more.

It would appear that God himself has provided the next in a list of “October surprises” with the passing of Ruth Bader Ginsburg now. She did not want a new justice nominated and approved under Donald Trump; that much is apparent from her own writings, allegedly revealed after she passed away. However, the stability of the United States is more important than the wishes of any one person. The nation ought to come first.

Not the hysterical grown-up crybullies of neo-Marxist dystopia, the Democrat Party.

I think we have a bunch of truly hysterical and insane people. I think it reflects bad taste when we start talking about political natures of things when someone we disagree with dies, as with Justice Ginsburg. I disagree, and strongly! with many things she thought and opined.

But pushing her dead body aside with all the respect one gives an empty beer can is no better than the utter lack of regard for PERSONS that Marxists have. That was the play the media tried with Senate Majority Leader Mitch McConnell’s statement being run that he will get the Senate to confirm the President’s next pick. The suggested context was “right away”, though Senator McConnell never said anything about when.

In my opinion, making such a statement to the press right at the passing of Justice Ginsburg was a clumsy political move, even though it is telling the truth. Perhaps Senator McConnell is trying to find his inner Trump by saying what he wants to say without regard for the political fallout. If so, that is a good move, but it precipitated a lot of fallout Republicans usually try to avoid, so this is different.

Procedurally, there is no reason not to put in a new justice right away. Andrew McCarthy gives perspective on this (his piece is linked to on Fox’s site, and it is an important one to read.) The Constitution has no rule about WHEN you nominate and confirm a justice, just that the President nominates and the Senate confirms. Everything else is political positioning in the moment.

There are no rules about what happens in the last year of a president’s term, nor codicils that hinge on whether the Senate is controlled by the president’s party or the opposition. For example, there was nothing inappropriate about President Obama’s nominating D.C. Circuit judge Merrick Garland after Justice Antonin Scalia died months before the 2016 presidential election; nor was there anything wrong with Senator Mitch McConnell’s holding his Senate majority together to block the nomination — against the caterwauling of the media-Democrat complex.

Everything about that episode was political. If the vacancy had opened earlier in his presidency, or when the Democrats controlled the Senate, Obama would have nominated someone younger and more left-wing than Garland — someone like Justice Sonia Sotomayor (whom Obama did pick years earlier). He chose Garland, a well-regarded, then-62-year-old moderate, only because Senate Republicans held the whip hand: Nothing in the law required them to consider the nomination, so the president’s only hope was to turn up the heat politically. Republicans would have felt no pressure if the president had nominated a radical, so he chose someone who seemed to be as palatable as possible for Republicans (while still being a reliable liberal on important cases).

But this baby behavior from grown up men and women… “Burn it all down” – this is dangerous. It is MOST dangerous if we heed these people, because it reinforces the sense of power they have through doing this sort of temper tantrum. However, it is also the case that these days we see people take such sentiments into action.

Andrew McCarthy warns that should the President make a move to confirm a new justice on the fast track, that the rioting will be like nothing we have yet seen. He opines that while it is within the President’s power to do this, it may not be the wisest choice.

McCarthy suggests that leaving the post open through the election, but floating possible candidates for the post might be the middle ground that helps the President win reelection. To date, Joe Biden has not floated a single possible nominee for the High Court, and this may be a campaign decision, as the Democrat electorate already seems to be far too uneasy about the radicalism on display as promoted by the leadership of their party. Only in the the last few days has Nancy Pelosi finally addressed the wrongness of the riots, only after it was becoming incredibly obvious that the riots, led by progressive and far-left Marxist and Soros-types, was actually not attracting Democrat or swing voters, who were instead going for Trump as the Law and Order candidate.

Even the suggestion of any given candidate is likely to spin off riots, though. This is because the people wanting to riot over every little thing are so much like our kid at the beginning of this piece – spoiled, used to being appeased every time and more and more aggressively manipulative about getting their way every time they get their way. Even with this possible “middle ground” approach, we already have the self-same Nancy Pelosi hinting at another Compleat Fake Impeachment Attempt, playing on the substantial combination of ignorance of how the Constitution actually works and the passions of inflamed and unsatisfied progressive baby-brats.

This needs to be stated because for the Democrats it is all about power, and damn the fact that this power is obtained through dishonesty and absolutely cruel manipulation of great numbers of citizens. This election and everything about it is a battle between the civilized and rational and the brutish and irrational. While many Democrats will resent this being said of them, my message to those Dems would be to ask themselves (1) are they personally ready to burn cars, buildings and people, and (2) if they are not, why do they support those who are doing this?

We have an extremely irrational, but no less dangerous, revolution trying to take shape. Judging from past history, it does not appear that this revolt can be appeased. It must be defeated. These hysterical people need to have happen to them what happens to any hysterical person – a big fat slap in the face, and a huge moment of pause.

To that end we have to examine what Andrew says about both the objective values of the Constitution, and the social tension in the country at this time, spurred by paid ‘revolutionary agitators’ who are making their biggest pitch to overthrow the United States that we have yet seen in the nation’s history.

Sad but exactly with that wish Ginsberg more or less disqualifies herself as a Supreme Court judge by both trying to rule from beyond the grave while ignoring the law. I have some doubt whether this was actually her wish, but she was always somewhat more activist then judge. The rules are straightforward: – Presidents nominates candidate – Senate takes a vote requiring 51 votes so a common majority only. By the way the election is about the president which is to nominate candidates and about the Senate which is to vote on confirmation. This nomination and confirmation for a… Read more » 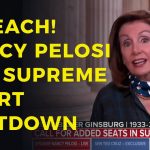 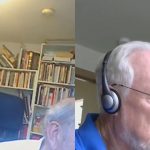