The Duran’s Alex Christoforou and Editor-in-Chief Alexander Mercouris discuss The Brexit Party’s second place success in the Peterborough, UK by-election, where Labour held on to the seat by just 683 votes, as Nigel Farage’s upstart political party is now outpacing the Tories.

The Brexit Party’s strong showing may jolt the next Conservative Party leader into finally delivering a no-deal Brexit in order to avoid Nigel Farage’s party overtaking them in popularity.

Last night’s by-election saw Labour’s Lisa Forbes narrowly secure victory with just 683 votes more than the Brexit Party’s Mike Greene. The Conservative Party support was decimated, with Paul Bristow losing a 25 percent share of votes compared to the 2017 snap election. David Hearne, a researcher for the Centre for Brexit Studies at Birmingham City University, believes the growing popularity of the Brexit Party in Peterborough will place more pressure on the Conservatives to “defeat” the threat of Mr Farage.

They are currently holding on to power by a thread following Theresa May’s disastrous withdrawal negotiations with the EU.

Mr Hearne told Express.co.uk: “Peterborough is significantly more pro-Brexit than the UK average, and the by-election was always likely to be fertile ground for Farage, particularly given lower turnout.

“A Brexit Party surge will boost the leadership chances of Boris Johnson, who will argue that he is best placed to defeat Farage.

“I don’t think it makes Brexit more likely though as Parliament remains opposed to leaving with no deal. 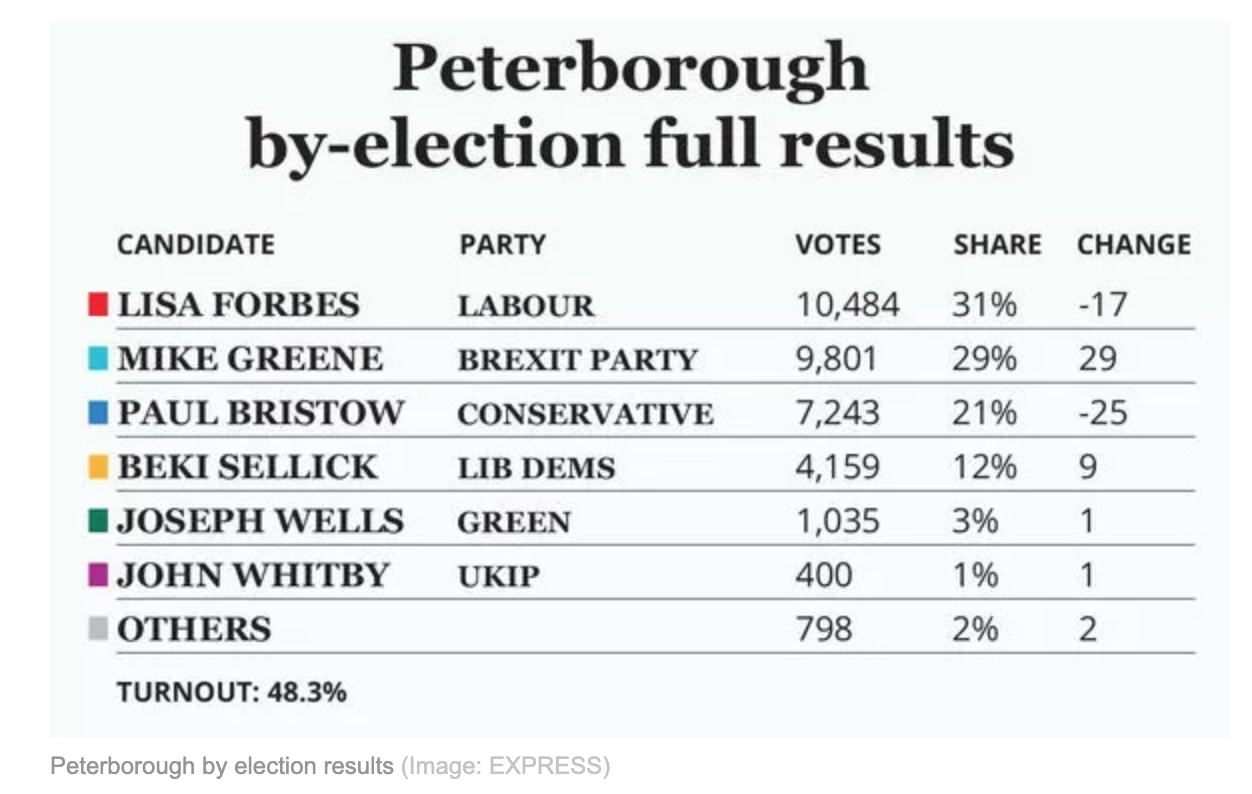 “However the Tories will be desperate to avoid a general election given the Brexit Party’s popularity with their voters.

“MPs are likely to try to challenge any attempt to force the UK to leave the EU with no Withdrawal Agreement.

“Expect then the prospect of another referendum to try and ‘settle’ this issue and hence another Article 50 extension request to the EU come October – regardless of who becomes Prime Minister.”

Labour won just 10 seats and the Tories four hinting a huge political change was on its way.

Speaking today, Mr Farage told BBC Radio: “There are now seats like this over the country where Conservative voters are going to start to realise that if you vote Conservative you’re going to finish up with a Corbyn government.

“If we don’t leave and leave with a clean Brexit on the 31st of October, the Brexit Party will power on.”

Alexander’s bias is showing here — the idea that the Tory vote didn’t collapse is laughable. After all they were 25% down on the last election. If that’s not a collapse what is? Particularly in the British context. Second, I’ve felt for a while that he and Alex need to develop a better understanding of the current Labor party. In fact Corbyn’s wing, the current ruling wing of the party, is in favor of re-industrialization and various other economic policies: re-nationalization for example, which are undoubtedly taking them in an anti-EU direction. The problem for Corbyn is two-fold, he has… Read more »