The Duran’s Alex Christoforou and Editor-in-Chief Alexander Mercouris discuss the latest push by the UK establishment from both the Conservative and Labour Parties to adopt a pro-EU stance and abolish the entire Brexit vote.

After EU elections that saw Nigel Farage’s Brexit Party surge to dominance, the two establishment UK parties have learned nothing from the stinging defeat.

Labour activists have launched a fresh campaign to get a second Brexit referendum adopted unequivocally as policy at its party conference in a move they hope will force the leadership to shift to a pro-EU position before a general election.

Meanwhile various Conservative MPs are forming a coalition block to rebuke the potential rise of a no deal Brexit party leader and eventual successor to outgoing PM Theresa May.

Observing diplomatic protocol has never been high on President Trump’s list of priorities, and why would it be? After all, it was his propensity for expressing his unfiltered opinion that helped endear him to the American public. So, as he prepares to embark Monday on a state visit to the UK where he will honor the soldiers who fought in ‘D-Day’, it’s worth asking: Why would he start now?

In keeping with his history of offering his unsolicited advice to the UK over its fumbling Brexit strategy, Trump has once again dived headlong into the kingdom’s biggest issues of the day: The ongoing Brexit negotiations, and the Tory leadership contest to install the UK’s next prime minister.

During an interview with the Sunday Times, Trump explained how he would handle negotiations with the EU if he were in Theresa May’s shoes. Instead of committing to pay the $50 billion ‘divorce settlement’ to which the UK is legally obligated, Trump would tell the bloc to kick rocks – then sue them if they complained.

Because she lacked the temerity to make these bold decisions, Theresa May, Trump said, had left the UK in a very difficult position (if only she had taken his advice!). Now, the UK has “very little to lose” in its Brexit-related negotiations.

“If I were them I wouldn’t pay $50 billion. That is me. I would not pay, that is a tremendous number,” Trump told the Sunday Times.

If a deal can’t be reached by the Oct. 31 extended deadline, then the  UK should simply “walk away,” Trump added.

President Trump went on to praise his “friend” Nigel Farage, whose Brexit Party just won a sweeping plurality of the vote in last months’ EU Parliamentary elections, and recommended that whoever May’s successor might be, they should seriously consider sending Farage to Brussels to lead the next round of Brexit negotiations. Trump said it was “a mistake” not to include Farage in Brexit negotiations and encouraged the next prime minister to send him to Brussels.

“I like Nigel a lot. He has a lot to offer. He is a very smart person. They won’t bring him in. Think how well they would do if they did. They just haven’t figured that out yet,” Trump said.

One day earlier, Trump angered most of the candidates vying for the Tory leadership when he offered his unsolicited endorsement of Boris Johnson – who has encountered some resistance from his fellow Tories in recent days despite being the frontrunner among the party’s membership (who will ultimately vote on the top two candidates on the leadership ballot).

“I like him. I have always liked him. I don’t know that he is going to be chosen, but I think he is a very good guy, a very talented person. He has been very positive about me and our country.” 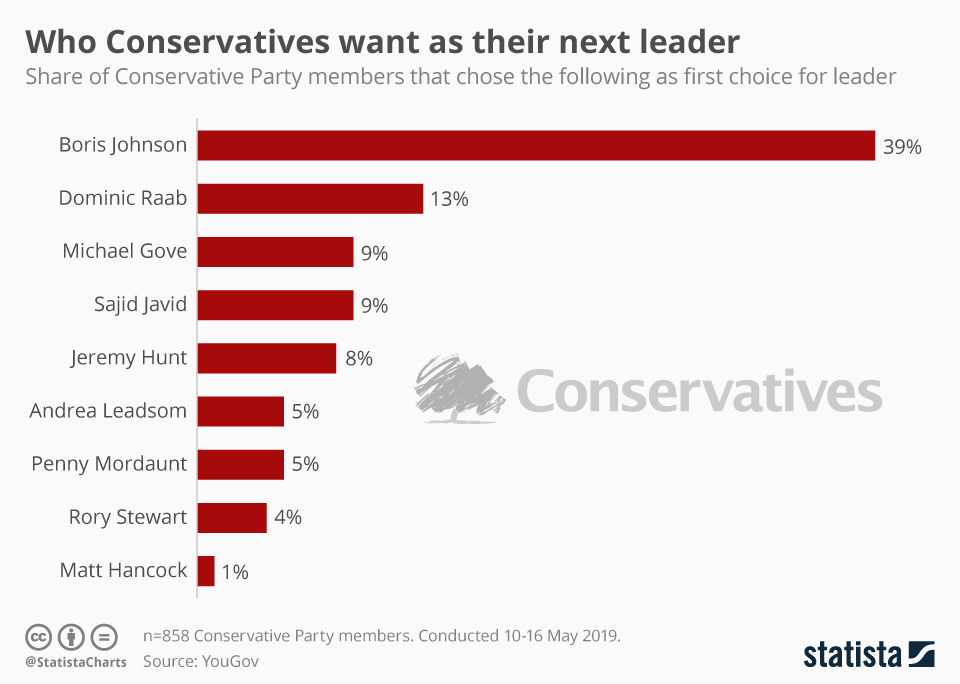 Trump added that other candidates had approached him in a bid to secure his endorsement, saying that he could “help anybody” he were to endorse.

“I could help anybody if I endorse them. I mean, we’ve had endorsements where they have gone up for 40, 50 points at a shot.”

But as Trump prepares to depart across the Atlantic, where he and his four adult children will meet the Queen, as well as Prince Harry, William and his wife, Kate, one individual will be conspicuously absent: The Dutchess of Sussex, Megan Markle, who will reportedly be home tending to her newborn son, Archie. Trump created a controversy late last week when he said that he didn’t know “that she was nasty” after being confronted with a comment she made about moving to Canada if Trump had won. Though Trump followed that up by praising Markle, saying he thought she made “a very good” American princess.