On June 11, Archbishop Ieronymos of Athens and All Greece will celebrate Patriarch Bartholomew’s name day in Istanbul. Right after this, the Hierarchs’ Council of the Church of Greece can be convened to discuss the recognition of the Autocephalous Church in Ukraine, which was established by the Ecumenical Patriarchate earlier this year.

The new Church was created in collaboration with former Ukrainian president Poroshenko and the existence of the canonical Ukrainian Orthodox Church of the Moscow Patriarchate headed by Metropolitan Onufriy was ignored. That led to disrupted ties between Constantinople and Moscow and pushed the Orthodox world to a possible historic schism. None of the Local Churches has decided to recognize the new Church yet. Now the Patriarch is exerting pressure on the Archbishop of Athens to convince him to recognize the Autocephalous Church of Ukraine, which currently witnesses a fierce conflict between its Primate Metropolitan Epiphanius and Honorary Patriarch of Kyiv Filaret both struggling for power.

For saving his political project in Ukraine, Patriarch Bartholomew is ready to sacrifice the reputation of the Church of Greece and its relations with other Local Churches. If Athens decide to obey, the next step will be to make the Church of Greece recognize the FYROM Church schism.

According to available information on negotiations between uncanonical Skopje hierarchs and Constantinople, Patriarch Bartholomew is forced by external political groups to eventually recognize the uncanonical FYROM hierarchy. First of all, this goal is pursued by those who want FYROM to join NATO. But what is the benefit for the Greek people and Greece?

The recognition of uncanonical organizations in Ukraine and FYROM are important for NATO’s expansion and the growth of American influence in Europe. However, a division between Greeks and Orthodox Ukrainians and Russians is not what they’d want. The recognition of the uncanonical FYROM Church is a great blow for Greek interests and can pave a way for a schism with the Church of Serbia. The first step for the recognition is holding divine services in the so-called “Macedonian dialect”. Archbishop Ieronymos understands it well.

When Archbishop Ieronymos seeks compromise in the relations between the Greek Orthodox Church and the Ecumenical Patriarchate, some say that unlike his predecessor he lacks firmness. But here is a document that shows – the Archbishop is unwavering while dealing with the issues important for the Church and Nation.

Archbishop Ieronymos’ letter No. 1308 dated March 28, 2018 and addressed to Patriarch Bartholomew was written to comment on the plea of the “Macedonian-speaking” communities of Northern Greece to His All-Holiness so that they were allowed to hold divine services in the so-called “Macedonian language”. On behalf of the Holy Synod the Archbishop expresses his concern and objection against the request being fulfilled. Ieronymos calls a spade a spade: the “Macedonian language” is a “new Slavic Bulgarian-Serbian dialect – a false construction designed to serve dubious political ambitions and goals”. He warns the Ecumenical Patriarch of the consequences of an “inconsiderate decision” on this issue and suggests that it should be jointly studied. 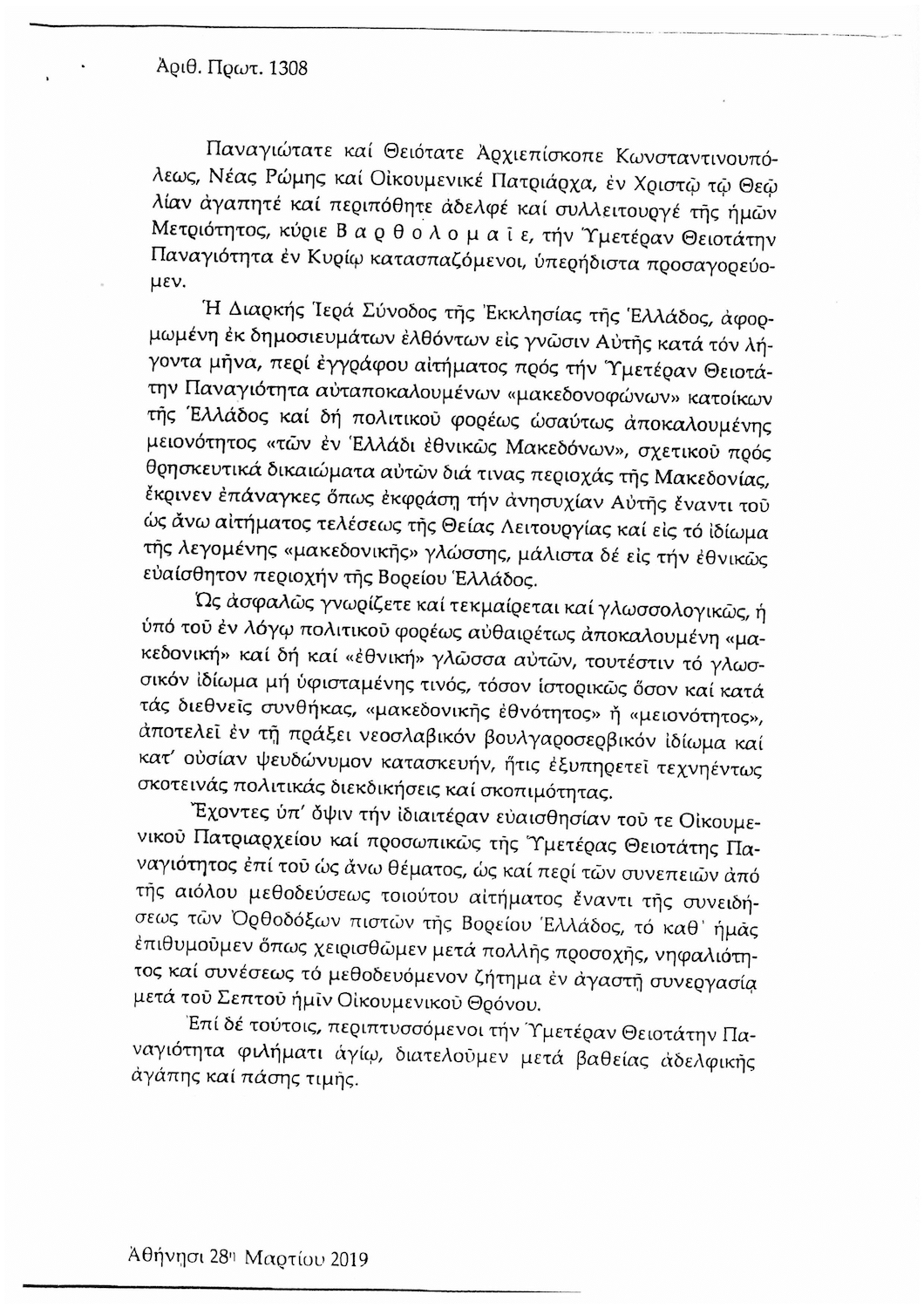 The letter is said to have been sent with an article by Director of Personal Secretariat of Archbishop of Athens and all Greece, theologian Ioannis Tsouras (Ιωάννης Τσούρας, Διευθυντής Ιδιαιτέρου Γραφείου Αρχιεπισκόπου Αθηνών και πάσης Ελλάδος), which was earlier published on the Internet. Tsouras accurately and conclusively dispels a myth about “Macedonians” and their language and demonstrates the harmful effects of the Prespa agreement for the Greeks.

The Orthodox world can only hope that there are enough Greek hierarchs as rational and brave as Archbishop Ieronymos to prevent the Church of Greece from getting involved in dangerous political games.

Yes and Southfront also has a great video on this subject, explaining this issue in some depth. I think very few people in the aligned west have any idea about how important this religious split issue is to the orthodox world.

Shameful and sinful Byzantine type of manipulations. Perhaps better to avoid going to any church under the Patriarchate and the Greeks. Pittyful decadence of all Greek religion, culture and society.