When people claim there are two Americas, they don’t know the half of it, but the divide isn’t between black and white or rich and poor as is often claimed, rather it is between the left wing mob and sane people. The former includes most of the so-called liberal establishment and almost the entire mainstream media. The recent trial of Kyle Rittenhouse including the long run up to it was symptomatic of that.

Rittenhouse it will be recalled shot three people during a riot on August 25 last year, wounding one and killing the other two.  Andy Ngô was unarmed when he was seriously assaulted during street disturbances in Portland, Oregon on June 29, 2019. He suffered a head injury which left him with bleeding on the brain, often a life-changing and sometimes fatal injury, though fortunately he recovered. Rittenhouse was struck with a skateboard but fortunately sustained no serious injury though if he hadn’t fired on his attackers he would almost certainly have been beaten to a pulp, if not murdered.

The mainstream media coverage of the assault on Ngô was disgraceful. Ngô is a journalist but for some reason is always portrayed as a trouble maker. Rittenhouse was a seventeen year old kid, one of many people who travelled to Kenosha, in his case a very short distance, to guard property during a civil disturbance. What led to this disturbance? According to the mainstream media, it was sparked when an unarmed black man was shot in the back seven times by police. Sounds terrible, doesn’t it, but what was the full context?

On August 23, police in Kenosha were called to a domestic disturbance; Jacob Blake was wanted for sexual assault and other charges. He resisted arrest and was shot seven times by the police who said they thought he was reaching for a gun. There is video of this, but before you condemn the officers for being trigger happy, check out this shocking video in which a black woman loses it with a police officer. He tasers her, but Nika Holbert still manages to draw her gun and shoot him. This wasn’t a black and white thing, rather it was symptomatic of America’s insane gun culture. Usually it is young black men who shoot people on the slightest pretext or none, in this case it was a black woman. Without wishing in any way to whitewash the American police who have an appalling record for shooting innocent people – of all races – the shooting of Jacob Blake was at least understandable.

This shooting was used as a pretext by the usual suspects to cause mass destruction of property in Kenosha, alluded to by the media as a protest against racism. Indeed, some of these people are so ignorant they thought Blake had been shot dead by the police. Some still do. The Independent newspaper actually reported that Kyle Rittenhouse had shot three black men; all three were white. What does that tell you about this movement for so-called racial justice?

After Kyle’s warranted acquittal, we saw the same type of ignorance on display from Black Lives Matter who claimed “Today’s not-guilty verdict is expected when white supremacy lives and breathes within our institutions. It is a reminder of how our legal systems are deeply rooted in white supremacy.”

Amnesty International, an organisation that should know better, reported that the American criminal justice system was riddled with “white supremacy and anti-Black racism” while in Britain, the Socialist Workers Party reported that Kyle’s trial was rigged. It was indeed, but not the way the comrades claim it was.

The Democrat judge was very fair, but the prosecution bent over backwards, forwards and sideways to convict Kyle; perhaps the most embarrassing moment came when a major prosecution witness admitted on the stand that he had been coached. There was some surprise when Kyle took the stand himself. One of his attorneys said later that in Wisconsin, a defendant who doesn’t take the stand will be convicted. In the United States, a defendant will very often not take the stand, but in a murder case he should always unless there are compelling reasons for him not to, something that is even more important in a rape case.

When he was cross-examined, the lead prosecutor suggested that as Kyle had remained silent when he was arrested, he was now tailoring his evidence to suit the case. This is a gross violation, one that will be lost on many people, but in the UK it is enshrined in statute law; in the US, it is case law, in particular Miranda v Arizona, (1966). When someone is accused of a crime and arrested it is often the best course of action to say nothing. There are many reasons for this. An arrest may be traumatic or the circumstances of it may be. If someone is in shock, under the influence of drugs, of alcohol, in pain, that individual may say something he may regret later.

The police are quite capable of putting words in a suspect’s mouth, or as in the words of that famous poem:

“If you can bear to hear the truth you’ve spoken

Twisted by knaves to make a trap for fools” the fool being you.

The judge was visibly angry at this try-on by the prosecution, but Kyle’s honest, straightforward answers made Thomas Binger look stupid.

The angry mob baying for Kyle’s blood was in stark contrast to similar crowds in Texas that called for the freeing of murderer and serial rapist Rodney Reed, a man convicted of heinous crimes on absolutely overwhelming evidence. Ditto the crowds that called for the release of another murderer in Oklahoma, Julius Jones, again convicted on absolutely overwhelming evidence. Thankfully, the Kenosha jurors were not intimidated by their antics, but there was another, equally serious attempt to pervert justice, namely the tailing of the jurors’ van on their way home by an MSNBC hack.

The idea that the American criminal justice system is rigged against blacks or in favour of white defendants would be laughable if it were not so tragic. What is happening with the mainstream media is gaslighting on an enormous scale, trying to convince people that something is happening when it isn’t and vice versa. True, as with the Jacob Blake shooting, we can sometimes be deceived as to what really happened or in that case, why it happened. The big question is or should be why do perceived injustices against black men or by so-called right wing extremists lead to this sort of public disorder, damage to property, injury, and at times loss of life while left wing violence especially gets a free pass?

The reason is or should be obvious, these people are being used by those in power, and during the Trump era by those seeking to unseat him. The National Guard could have suppressed all these so-called protests beginning with those after the death of George Floyd, but those in power chose not to, indeed in Kenosha and elsewhere, the police were told to stand down, and obeyed dutifully like the agents of state repression they are.

Though I have criticized some of your prior articles, and though your present one says that “the divide isn’t between black and white or rich and poor as is often claimed, rather it is between the left wing mob and sane people” leaving the right-wing mob off the hook, much else in it is correct, especially about Rittenhouse and the jury, for which I would refer readers to this brilliant brief video-compilation: https://www.youtube.com/watch?v=tkTnQfjRvk0

Thank God he was acquitted!

Multi-racialism was always a mistake, until power is reinstated to the Whiteman such a tragic situation will continue to recur. 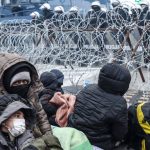