Then Judge Linn began sentencing just before midnight London time, 6.57pm local time. He delivered a narrative verdict laying out the background to the case fully:

Smollett lied to the police and hasn’t stopped lying since. This wasn’t a crime of impulse but was planned in minute detail, he wrote an actual script.

He made the point about Smollett’s hypocrisy and said he clearly didn’t do it for the money. That had been a suggestion early on in this case, but the more one looks at it, the clearer it is that this had nothing at all to do with money. Indeed, Smollett and whoever is helping finance his defense has spent untold amounts of money on the case. How many lawyers did he have in the courtroom with him today?

The judge added that extreme premeditation was an aggravating factor, and that he had exploited the Osundairo brothers. He might have added he had libelled one of them claiming the two had “an affair” when everyone knows that Nigerians and homosexuality go together like rhubarb and gravy.

“You’re just a charlatan pretending to be a victim of a hate crime”.

“Your very name has become an advert for lying”.

The judge delivered the sentence: 30 months probation followed by $120,106 restitution and a fine of $25,000. At this point, Smollett and his legal team were probably ready to high five each other, but then Judge Linn added the first 150 days of this sentence will be behind bars and will start today. Do not pass Go, do not collect $200. Okay, he didn’t use exactly those words, but you get the drift.

After that, Smollett lost it big time:

“I am not suicidal” he said then repeated it in a loud voice and continued to protest his innocence. His lawyers asked for his sentence to be suspended pending an appeal. The judge replied that the wheels of justice turn slowly but sometimes the hammer of justice has to fall…not so slowly!

This was clearly a liberal judge as he alluded to “social justice” and spoke favourably of race-hustler Jesse Jackson.

Afterwards, there was live reaction to the verdict from outside the courtroom beginning with his sister Jazz, who said her brother was innocent; this should not be a controversial statement. It isn’t, it’s a laughable one. She said she prayed peace over her brother as well as over all victims of oppression and hate. His younger brother parroted the pantomime.

Later, Special Prosecutor Dan Webb and his team stood behind the assorted microphones and delivered their justification.

Kim Foxx, the woman who really started all this, was quoted Friday as saying Smollett had been subjected to “mob justice” by a “kangaroo court”. By contrast, Lori Lightfoot welcomed the sentence. Smollett has already lost the plot; losing Chicago’s loony lesbian mayor is the icing on the cake. Now let us look back to January 8, 2006 and what the late Clive James called the case of “The Speeding Judge”. This is an extraordinary case from Australia of a man who received a sentence of three years behind bars for trying to escape a speeding ticket.

At that time, Marcus Einfeld was nearly 68 years old when his car was caught by a speed camera travelling a mere 6mph over the speed limit. A fine of seventy-five Australian dollars was a fair whack in 2006, but not for a judge. What was of more concern to him was that the fine put points on his licence. Most senior judges everywhere tend to be chauffeured around, but not this one; although he was officially retired, he was still working on an ad hoc basis, and for some reason he preferred to drive himself. So when he turned up at court he simply told the magistrate someone else had been driving the car, and because he was a judge, he was believed uncritically. Case dismissed. Alas, because he was a judge, a reporter in the court took note of the case and looked up the name of the driver, Professor Teresa Brennan.

Interestingly, Australian-born so-called feminist philosopher Teresa Brennan was hit by a car at Deerbeach, Florida on December 10, 2002 and died from her injuries on February 3 the following year. When this was drawn to the attention of the bench, Judge Einfeld could and should have fessed up. He would still have been in a lot of trouble, but would probably have suffered only a large fine and a big dent in his reputation. Instead, as did Jussie Smollett a decade and more later, he kept digging.

No, not that Professor Teresa Brennan, he said, another Teresa Brennan. The lie machine kept spinning until Judge Einfeld managed to drag his own mother into his tangled skein. Don’t ask how old she was.

Eventually, he pleaded guilty to perjury and perverting the course of justice. At the age of seventy, he was sentenced to three years in prison, two without parole, which he served to the day.

Now compare this case with the grand lies of Jussie Smollett. Judge Einfeld implicated only two people in his lie-making; one of them was dead, and realistically nothing adverse would have happened to his mother. By contrast, Jussie Smollett’s lies had the potential to cause enormous damage. Let it not be forgotten that at this time, Trump supporters, especially white Trump supporters, were being harassed and even attacked by both political thugs and common or garden ones. In 2019, Chicago saw 492 homicides, many of them over trivialities. It is no exaggeration to suggest that had Smollett’s ludicrous story been given the official seal of approval, more people could have been murdered or simply assaulted on its account.

Jussie Smollett has earned every day he spends behind bars, and those who continue to support him in spite of the overwhelming proof of his guilt deserve nothing but our contempt.

One final and in a sense the most important point of the Smollett case is the reason it got this far with so many people supporting him. Smollett likes to portray himself as a victim, a champion of oppressed people, indeed he is doubly oppressed himself by virtue of being a black homosexual. The truth is very different. In this day and age, nobody gives a monkey’s that Smollett is black or half-black, nor if he drops his trousers for other men as long as doesn’t do it in the street and frighten the horses. Nobody in Chicago, anyway.

Smollett is no victim, rather he or if not he personally then his extended family are well-connected members of the liberal elite. There is credible evidence that the initial prosecution was dropped because of intervention by Michelle Obama. The reader is invited to compare the treatment of Smollett with the treatment meted out to Trump supporters or indeed at times to Donald Trump himself. He will then perhaps have a better understanding of how power really works.

Lol! This could make a comedy!
Open letter to.Justus Smollett – When you’re in a hole stop digging! 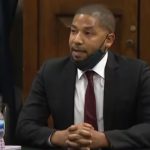