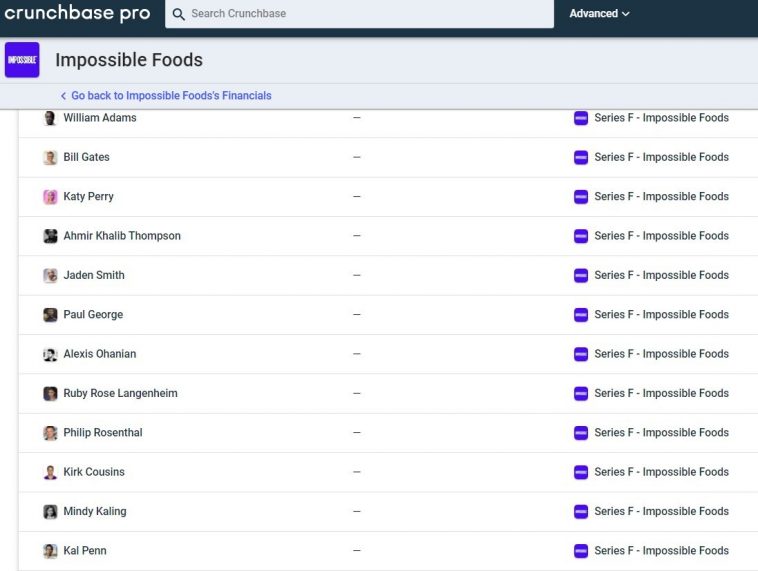 (PreIPOSwap.com – 8/14/2020) — Food company Impossible Foods is a Bill Gates portfolio startup.  For those who have not been following, Bill Gates has been killing it since COVID- literally.  His portfolio has ballooned to enormous sums.  And while the mainstream media is covering how much his billionaire friends have made – even Mother Jones failed to mention Gates name.

There are a few things that bring the Gates portfolio together; life sciences, genetic engineering, sustainability, and transhumanism.  Whether the ‘sustainability’ movement is genuine or an artificially created problem, we will leave for another article.  The fact is that events are happening in the real economy that are driving demand for Impossible Foods through the roof.  Of course, they are not the only company offering meat alternatives.  There is publicly traded Beyond Meat, and private company Just. But Impossible Foods is different in a few ways.

First, their cap table is a who’s who in pop culture.

If you were going to launch something that was questionably ethical, the most logical and smart thing to do would be to get a bunch of celebrities on board who would sell it to their fans.  It’s a genius branding image.  Those people on the cap table eat Impossible Foods and promote it.

Also, Impossible Foods employs food scientists that are working on hundreds of food products.  But this is not a food company, it’s a save the planet company.  That’s because the biggest CO2 emissions come from cows, which feed the American population beefy burgers at your local fat food chain.  So their do good business model is to create genetically modified foods that trick the human brain by use of chemical science to think it’s a real burger, and thus change humans diet.  It’s the first time that large scale human behaviors are attempted at being changed on a biological level (food).

Biting into an Impossible Burger is to bite into a future in which humanity has to somehow feed an exploding population and not further imperil the planet with ever more livestock. Because livestock, and cows in particular, go through unfathomable amounts of food and water (up to 11,000 gallons a year per cow) and take up vast stretches of land. And their gastrointestinal methane emissions aren’t doing the fight against global warming any favors either (cattle gas makes up 10 percent of greenhouse gas emissions worldwide).

These burgers are not healthy.  There are no studies done on the teratogenic effects on these chemicals.  They are trying to shift demand in global meat consumption – which will be beneficial for the planet.  Their business model was a big question mark – until COVID happened.

Since COVID demand for Impossible Foods has skyrocketed.  First, meat factories started closing because workers were catching COVID in the factories.

Then, government orders came in to start killing livestock (not only cows, also pigs, chickens, and other animals) and they are actually helping farmers doing the killing:

The government offered to help livestock producers locate contractors skilled in killing herds or flocks of animals and to provide cost-share funding for their disposal because the coronavirus pandemic has shut down packing plants and reduced consumer demand. The National Pork Board held a webinar on Sunday that discussed step by step “emergency depopulation and disposal” of hogs.

Based on traditional economic theory, what happens when supply evaporates?  Demand for remaining products goes higher.  That’s what’s happening to Impossible Foods.  In order to fulfill this demand, Impossible Foods has expanded distribution systems and will even ship product to your home or cafe direct.

Although Impossible Foods is not publicly traded, shares have been increasing in the private markets from the last round $15.5 to as high as $29, and investors still think there is a lot of room to go higher.

In fact, they just raised another $200 Million from a small group of investors:

Impossible Foods has raised $200 million more for its meat replacements. The new round values the company at a Whopper-sized $4 billion valuation, according to the data tracker PrimeUnicorn Index. The new round was led by Coatue, a technology-focused hedge fund; another New York-based hedge fund, XN, also participated in the round. Since its launch the company has raised $1.5 billion from investors, including Mirae Asset Global Investments and Temasek. The presence of these new public/private investment firms on Impossible Foods’  cap table could mean that the company is readying itself for an initial public offering, but that’s just speculation. Impossible previously raised money from investment firms including Horizon Ventures and Khosla Ventures,  as well as some of the biggest celebrities in the U.S., like: Jay Brown, Common, Kirk Cousins, Paul George, Peter Jackson, Jay-Z, Mindy Kaling, Trevor Noah, Alexis Ohanian, Kal Penn, Katy Perry, Questlove, Ruby Rose, Phil Rosenthal, Jaden Smith, Serena Williams, will.i.am and Zedd.

It seems like Impossible Foods can do the impossible, and has been built with the Monopoly model in mind.  The Monopoly approach to Capitalism doesn’t take risk as an entrepreneur does, they use predetermined outcomes to plan their business.  If there is no demand for a product, they create it.

There are rumors they are working on an IPO for next year.  There is an expression in Quantum Physics as well as the self-help industry, that describes these companies well:

There are no accidents.

Synchronicity is a concept, first introduced by analytical psychologist Carl Jung, which holds that events are “meaningful coincidences” if they occur with no causal relationship yet seem to be meaningfully related.

Another word is Serendipity.

an aptitude for making desirable discoveries by accident.

good fortune; luck:What serendipity—she got the first job she applied for!

If we look deeper at how the Elite operate, their ‘luck’ is actually intelligent planning.  For example when Microsoft was a garage company, it was Bill Gates parents who helped him secure the lucrative contract with IBM, you know – the one that made Microsoft the largest software company in the world:

Bill Gates’ mom, Mary Gates, helped her son form a lucrative relationship with I.B.M., securing a contract with his fledgling company, Microsoft, according to the New York Times.

Predetermined outcomes drive Monopoly Capitalism.  Imagine, a business without risk.  It’s better than finance!  Their business and political agenda is well thought out, well funded, well researched by think tanks, corporate consultants, advisors, lawyers, and experts.  The investors and others involved, such as Temasek, are some of the largest and most powerful people in the world.  Temasek is the sovereign wealth fund of the Singapore Government, that manages about $333 Billion.  Li Ka-Shing is Asia’s richest man.  Viking Global is one of the largest hedge funds in the world (at $33 Billion).  UBS is one of the largest banks in the world.  These are all systemically important investors, who don’t like taking risks… 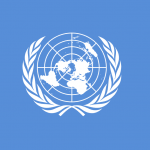 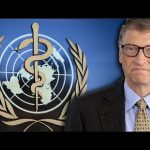