There are many examples of the contempt the western elite harbour towards their own citizens. Some of the most poignant examples, however, are not expressed in government policy but in the subtle ways that the media toes an unofficial government line, doing something legislation could not so rapidly do, control, numb and confuse the hearts and minds of ordinary people.

I have recently written about how the self-appointed ethics police of social media are often emboldened to act as censors for the would be proconsuls of the web in the aftermath of a terrorist attack.  But even before Twitter and Facebook existed, the corporate giants were taking it upon themselves to please big brother at the expense of free speech.

Prior to changing its name to iHeart, Clear Channel Communications was something of a radio monopoly in the US. From owning the major music and talk radio stations in big cities to small regional outlets, Clear Channel was ubiquitous.

Shortly after the 9/11 attacks, Clear Channel produced a memorandum which was passed to all of its music based radio stations with a list of songs that they recommended not broadcasting in the aftermath of 9/11. The vast majority of  songs were written years if not decades before the attacks and none of the songs had anything to do with terrorism. Most were apolitical songs with widespread popularity. The ones that were political tended to have an anti-war or charitable message. 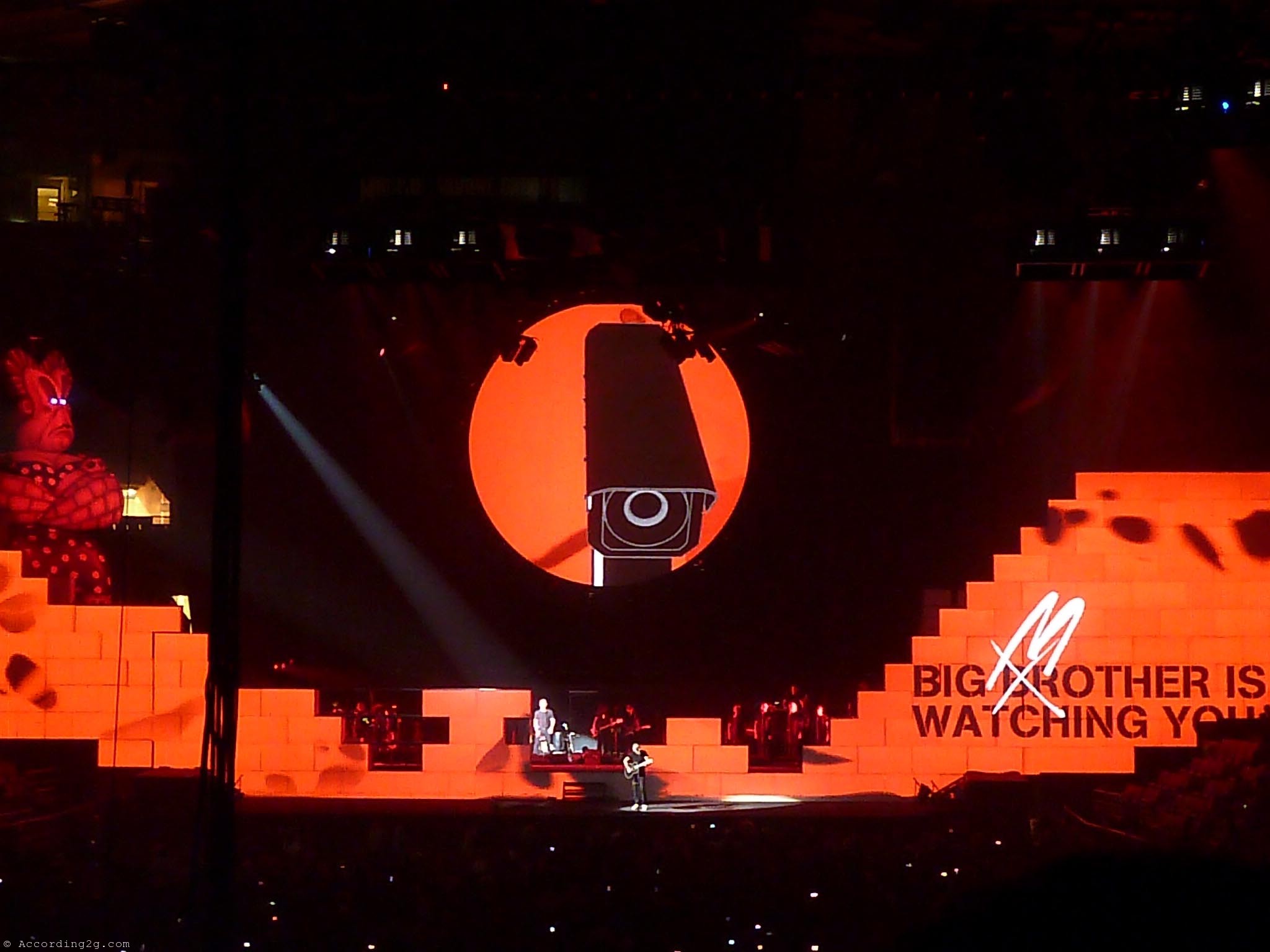 The list is demonstrative of the condescending attitude the elite have to ordinary people. The overt justification for the list implies  that after watching an attack on television (as most Americans watched it), people would somehow be too hysterical to hear the pop and rock songs that they had heard for years. Do they really think people are that neurotic?

Some of the highlights of the list indicate that whoever authored the infamous referendum was either a wanna be poet who couldn’t make the cut or a truly sadistic individual who makes sinister connections to wholly innocent pieces of musical and lyrical content. As usual the elite worry that the ordinary people might be as over-analytical to the point of being literally insane, as they are.

Here are some of the more absurd highlights of the list:

How a hippy folk-rock song about why ‘peace is cool’ could somehow be seen as a poor reflection on recovering from a terrorist attack is anyone’s guess. Perhaps because the song might make people question George Bush’s wars of aggression that started in in the aftermath of 9/11?

Again a soulful anti-war song, a kind of singalong for the anti-war movement of the Vietnam era. Was Clear Channel trying to promote a pro-Bush ‘war is good message’?

Imagine is the kind of L’Internationale for post-war hippies who grew up on Groucho films before graduating to the Marxism of Karl.

The songs anti-war, collectivist and fraternal messages clearly upset someone high in the ranks at Clear Channel.

The Hollies: He Ain’t Heavy, He’s My Brother:

This popular cover is all about compassion towards one’s fellow man with deeply Christian overtones. How could this gentle song be anything but warming, especially in a time of travail?

This contemplative song composed by Roger Waters is about a young boy questioning authority from the maternal to that of the state. The song is deeply pessimistic about the powers that be and is profoundly anti-war, “Mother should I run for President, mother should I trust the government? Mother will they put me in the firing line?”

Did Clear Channel want to ban not only anti-war messages, but also the challenging of pro-war political authority?

This Paul McCartney pinned ditty was panned by many as ‘the worst Beatles song’. It ostensibly has no real meaning, it’s something of a kids’ song.  It was just a bit of fun. If anyone wanted to distract themselves from the post-9/11 newscasts, what better song could there be to listen to?

Although there is an element of absurdity in the list, on closer inspection it is deeply sinister. If there is ever a time when an anti-war debate should be held, it is when a country is on the verge of war. The ‘911 wars’ started by George Bush are still haunting the world.

If an anti-war song could have ignited a broader anti-war debate after 9/11, the Clear Channel probably knew what they were doing after all, they were stiffing democratic engagement with peace. After all, many argue with an element of truth that the anti-war songs of the 1960s helped to turn many people’s opinions against the War in Vietnam.

The list is an odd mix of anti-war songs, the easy listening pop of Frank Sinatra and Petula Clark and the fun time rock and roll of artists like AC/DC who have the honour of having more of their songs censored than any other artist. Some of the selections are so far removed from 9/11 by even the most intoxicated stretch of the imagination, that one wonders if Clear Channel were using the list to see how far they could push the public before someone said something.

At the time Clear Channel denied the existence of the list, although it was latter authenticated. The official denial has since been removed from the official website.

This is an example of willing corporate collusion with the pro-big government/pro-war agenda. The fact that this story was generally confined at the time to music lovers and a few free speech advocates before totally disappearing, is a further sign that the msm are less interested in journalism than in pushing the agenda.

All of this happened as a then new album got censored in a manner which was as ominous as it was widely ignored. In the summer of 2001, a highly political and deeply anti-war hip-hop group called The Coup had completed an album called Party Music.

The album’s original cover was made in June of 2001, a month before Larry Silverstein took ownership of the World Trade Center in New York.

The original cover is depicted below. 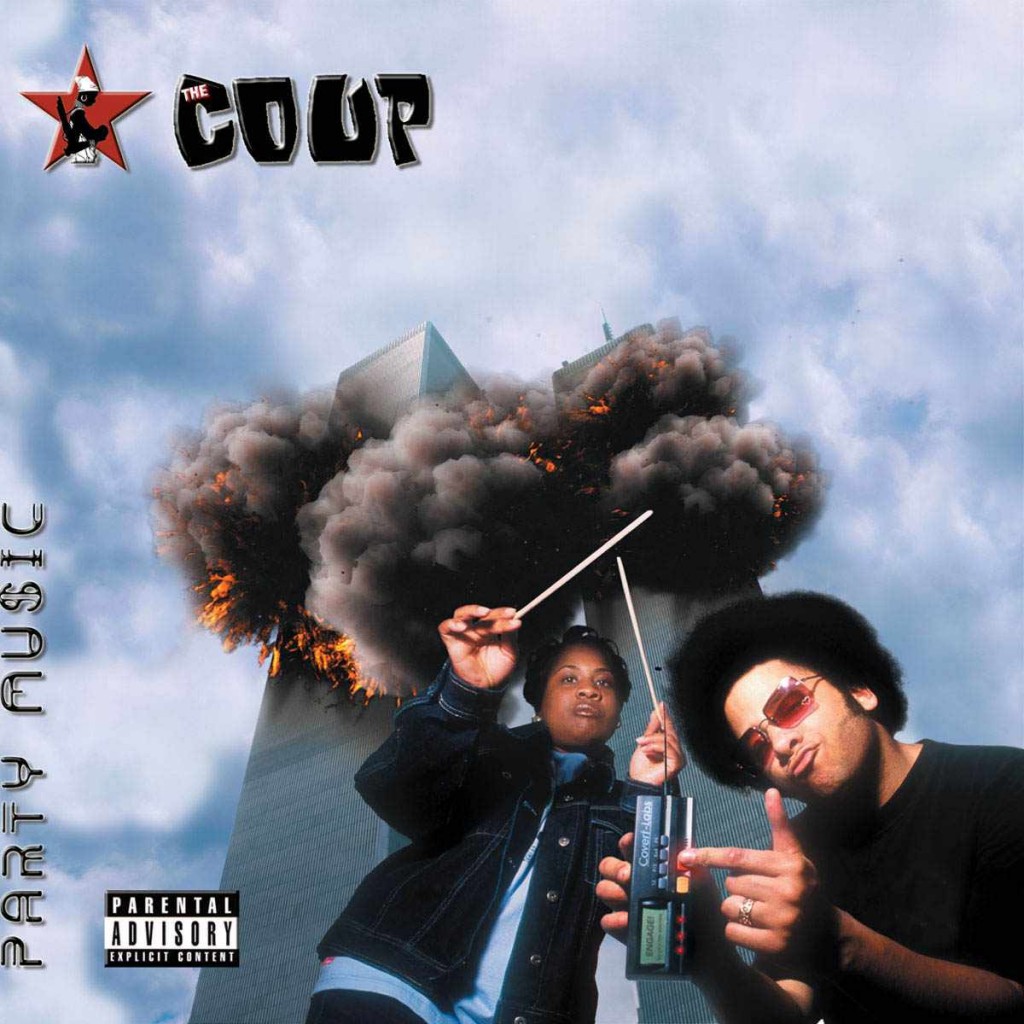 “As the day unfolded, I saw–which is what I should’ve known–what the media was doing with this tragedy. How the media and the government were using people’s shock and sadness to parlay it into spending millions more on the military, and to parlay it into making people [approve of] super right-wing measures–and using this incident on Tuesday to put forth the picture that this happened in a vacuum, as opposed to what really is going on–the fact that this is just one in a series of blows that needs to be compared to what the U.S. does on a yearly basis throughout the world. Even if all 50,000 workers died in there, it wouldn’t match up to the 100,000 people the U.S. generals ordered to be killed in East Timor”.

Riley’s full interview from 2001 can be read here.

In the event, the album cover which could have opened up a debate on US foreign policy during the crucial aftermath of 9/11 was shut down. The album cover was replaced by a bland picture of a drink on a bar and the album got little recognition.

The censoring of The Coup’s album art and the Clear Channel ‘banned list’ are just two examples of free speech coming under attack shortly after 9/11. Since then, the ability to peacefully express opposition political viewpoints has become increasingly difficult in countries like the United States.

NOW, here’s your Spotify playlist of each and every censored song. Enjoy it…while you can.