George Soros has responded to recent claims by Trump attorney Rudy Giuliani linking the billionaire financier to a Ukrainian organization accused of meddling in the 2016 US election for Hillary Clinton, as well as another organization whose joint report with BuzzFeed was cited three times in an August 12 whistleblower complaint lodged against President Trump by a CIA employee.

A Monday email from Soros spokesman Michael Vachon with the subject “Ukraine Debunking” reads: “You may have heard (or seen) Rudolph Giuliani’s ranting about George Soros allegedly playing some nefarious role in Ukraine.” The letter then directs people to a Washington Post article authored by Emily Tamkin – who has previously written in Soros’s defense (and loves the word ‘boogeyman’).

Giuliani has come under fire by the left for his recent work to uncover the truth behind several claims regarding Ukraine – including meddling in the 2016 US election to benefit Hillary Clinton, as well as efforts to encourage Ukraine’s new president, Volodomyr Zelensky, to investigate former Vice President Joe Biden.

Biden openly bragged last year about strongarming Ukraine when he threatened to withhold $1 billion in US loan guarantees unless a prosecutor investigating energy giant Burisma Holdings – which was paying Biden’s cocaine-addict son Hunter $600,000 to sit on its board – wasn’t fired immediately.

While the CIA whistleblower and initial media reports suggested that Trump was abusing his office to threaten Ukraine into investigating the Bidens, transcripts of a July 25 phone call between Trump Zelensky reveal that Trump applied no such pressure.

In an appearance on Fox News last week, Giuliani said: “What I’m talking about, this, it’s Ukrainian collusion, which was large, significant, and proven with Hillary Clinton, with the Democratic National Committee, a woman named Chalupa, with the ambassador, with an FBI agent who’s now been hired by George Soros who was funding a lot of it” (for more on the situation with Chalupa and the DNC, follow the work of journalist Lee Stranahan).

Rudy Giuliani: "What I'm talking about, this, it's Ukrainian collusion, which was large, significant, and proven with Hillary Clinton, with the DNC, a woman named Chalupa, with the ambassador, with an FBI agent who's now been hired by George Soros who was funding a lot of it" pic.twitter.com/nNFyXnHA7r 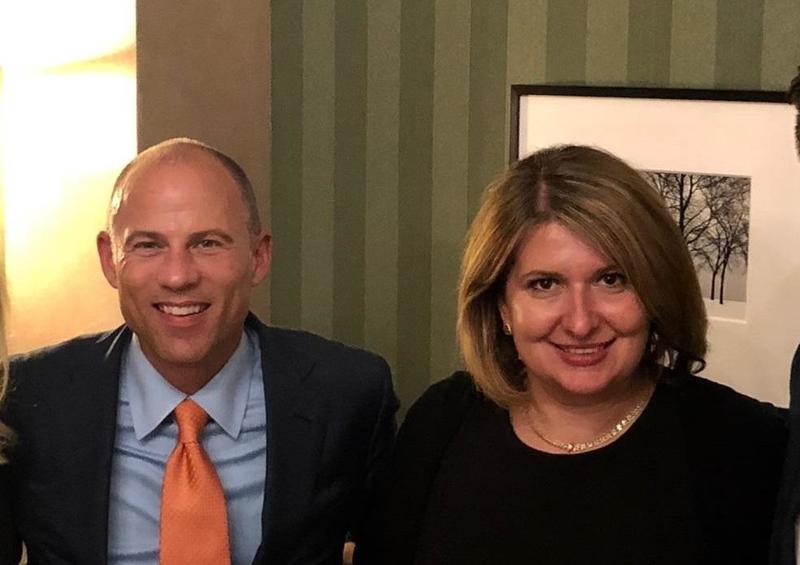 Chaly says that, at the time of the contacts in 2016, the embassy knew Chalupa primarily as a Ukrainian-American activist and learned only later of her ties to the DNC. He says the embassy considered her requests an inappropriate solicitation of interference in the U.S. election.

“The Embassy got to know Ms. Chalupa because of her engagement with Ukrainian and other diasporas in Washington D.C., and not in her DNC capacity. We’ve learned about her DNC involvement later,” Chaly said in a statement issued by his embassy. “We were surprised to see Alexandra’s interest in Mr. Paul Manafort’s case. It was her own cause. The Embassy representatives unambiguously refused to get involved in any way, as we were convinced that this is a strictly U.S. domestic matter.

“All ideas floated by Alexandra were related to approaching a Member of Congress with a purpose to initiate hearings on Paul Manafort or letting an investigative journalist ask President Poroshenko a question about Mr. Manafort during his public talk in Washington, D.C.,” the ambassador explained. –The Hill

Chalupa, who told Politico in 2017 that she had “developed a network of sources in Kiev and Washington, including investigative journalists, government officials and private intelligence operatives,” said she “occasionally shared her findings with officials from the DNC and Clinton’s campaign.”

Giuliani also said that former Ukrainian prosecutor Viktor Shokin, Biden had fired, “dropped the case on George Soros’ company called AntAC,” adding “AntAC is the company where there’s documentary evidence that they were producing false information about Trump, about Biden. Fusion GPS was there,” Giuliani added. “Go back and listen to Nellie Ohr’s testimony. Nellie Ohr says that there was a lot of contract between Democrats and the Ukraine. (via the Daily Wire).

Meanwhile, a footnote in the whistleblower’s August 12 complaint cites a joint report from BuzzFeed and Soros-funded Organized Crime and Corruption Reporting Project (OCCRP) to support their argument – notably leaving the “BuzzFeed” association out of the complaint.

Every page of the OCCRP website features the same bottom section listing the icons of four of the organization’s top funders, including Soros’s Open Society Foundations and the United States Agency for International Development (USAID). Indeed, OCCRP provides a hyperlink to the webpage for Soros’s Open Society at the bottom left corner of every page on OCCRP’s own website.

Soros’s Open Society was listed as the number two donor in most of the annual financial records posted on OCCRP’s website starting in 2012. Some years list Soros as the organization’s top donor.

OCCRP advertises its other funders, including Google, the National Endowment for Democracy, the Rockefeller Brothers Fund and the U.S. State Department Bureau of Democracy, Human Rights and Labor.

According to Breitbart, the whistleblower’s account cites the OCCRP report on three more occasions, to:

Soros, meanwhile, is scrambling to disassociate his name and organizations from Giuliani’s investigation. According to the Washington Post’s defense of the billionaire, “Soros, through his Open Society Foundations, has indeed been philanthropically engaged in Ukraine for decades.”

In short, Soros and his orgs are so deeply involved in Ukraine that there’s no way he couldn’t be caught up in this whole thing.

Soros explained that Ukraine was particularly important to him because he thought the country’s independence was geopolitically important. “As long as Ukraine prospers, there can be no imperialist Russia,” he wrote.

At the time, Soros’s foundation in Ukraine was supporting a whole network: an institute to train public servants, a foundation to develop legal culture in the country and a center for modern art, among other institutions. He claimed that all of this was important because he wanted “to supply Ukraine with the infrastructure necessary for a modern state — and an open society.” –Washington Post

That said, the Post‘s Tamkin admits that the AntAC-Soros link is a “small kernel of reality buried deep within Giuliani’s conspiracy theory.”

“I asked some of the protesters and anti-corruption groups working at the time if they received Open Society funding. And many, if not most, of them had. But that is different from Soros himself orchestrating efforts against political enemies, which is what their opponents were suggesting.”

So – just because Soros’s Open Society foundation funded groups which may have meddled for Hillary in the 2016 US election, and are cited by a CIA whistleblower against President Trump, his defenders claim it doesn’t mean his fingerprints are personally on any of it.

Time to RICO the entire DNC

Don’t forget, Rudy…..that yet another ‘unproven’ yet more than obvious occurrence was the vast propaganda troll farm put to work by Ukraine’s SBU, also obviously with vast help from the UK and US, to spoof Russian ‘meddlers’ on social media and hackers of everything but the kitchen sink, and if it had a Kohler voice-operated faucet, probably that too. Their motto: “find one, spoof 99 more”. Look and ye shall see. No sir, Rudy…….you’re just barely scratching the surface. There’s more dirt in this whole DNC inspired business than a mere day’s worth of your investigations into Fulton Fish Market’s… Read more »

Well, not exactly not ‘unproven’. New Knowledge faking Russian interference in the Alabama Senate race, then having Hamilton 66 record it as actual proof of Russian interference, then of course when exposed, the MSM excusing it as nothing more than a ‘secret experiment’, comes to mind, for one.

Then of course, there’s that memorable event of a VT utilities trojan horse by the name of Ihor from Lviv….and so many more, like Vault 7 spoofing tools……and on and on, ad nauseam.

Nice name, Alexandra Chalupa, (A ‘chalupa’ is a dump or a severely run-down house). One can just imagine the parents who take the name of a Russian Empress and added it to a ‘dump’. So ‘Alexandra Dump’ looks the part. The Judaification of the USA has now been succeeded by the Ukrainification of it. There must be a Founding Father somewhere who has decreed “if you lie with dogs, you will rise with fleas’ and “if you lie with dogs twice, you will rise with Ukrainians.” The US in its recent past is proof of that reality. Its Founding Fathers,… Read more »

Imagine if you were a Jew in Germany in 1941 and the last thing you saw, before being separated from your about-to-be confiscated goods, and soon possibly your life, was the face of SonderKommando George Soros and his Adult Nazi ‘Mentor/cum adoptive parent.

Jews who do not denounce this monster daily in the public square are complicit in their own degradation.

Soros was. 15 at that time.
SonderComa do,what ?
Where do you dig this idiocy?

Broken English? Can’t be an Israeli hasbarat, they like to hire proficiency. You must be one of those Ukies that like to re-invent the Nazis’ role in shaping the world..

Bets me what you want.
In any case,nobody cancontest this age at that time.

Alexandra Chalupa, who was instrumental in setting up Russia Gate, worked on the Clinton Presidential Campaign, is a member of the Ukrainian Nationalists, and set up the ‘Prop or Not’ Blacklisted Media. Beforfe moving onto the ‘Impeach Trump’ campaign. Then you have Burisma Holdings, which was part of the Privatt Group, when they employed Biden and Son Enterprises. Funnily enough, the head of the Privatt Group Igor Kolo moisky, was the Head of the European Jewish Community, and also the founder of the Na zi ‘Azov’ Battalion. Ironically, So ros, the Hungarian, of Jewish or is that Khazarian faith, did… Read more »

Rot by any other name....
Reply to  AM Hants

RE: Burisma; The Bidens are opportunistic carpetbaggers, plain and simple. To deny it is to challenge sanity.