A lot of people these days cannot see past the invocation of the word racist. Indeed, Drudge Report exploded early this past weekend with a blatant use of the word directed at President Trump by Democrat Congressman Elijah Cummings. For a couple days, the internet appeared to blow up, with Rep. Cummings gaining the upper hand (media wise) with his rhetoric, calling the President a racist.

For about 36 to 40 hours, there was no word from the President, and even not much of a response from Fox or any one else to defend him. But the response was coming, and about 9:30pm Eastern Time it was visible on Drudge and Fox to anyone following the story: 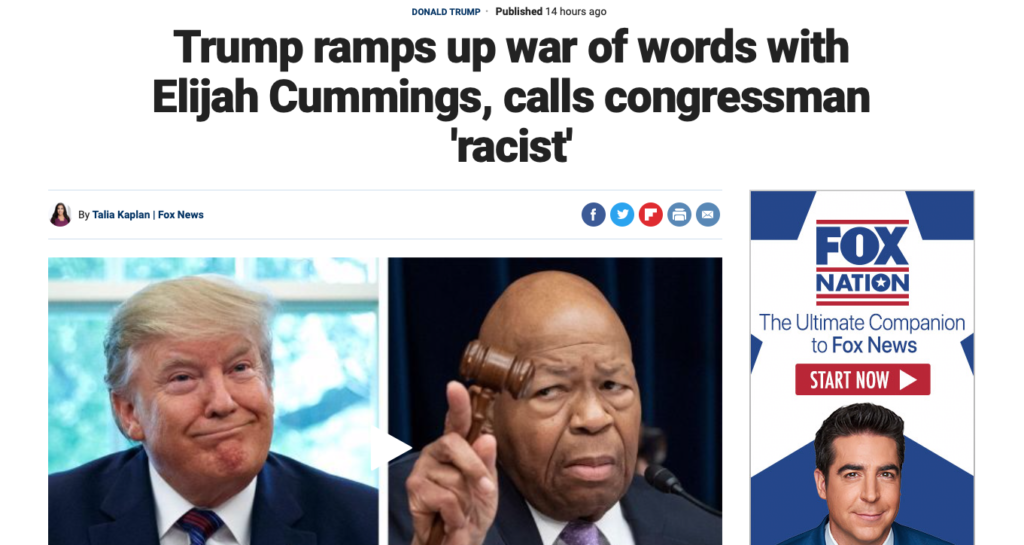 Concurrently, one of Mr. Trump’s top aides (the Associated Press could not even make sure that “aide” was spelled properly!!) Mick Mulvaney went on Fox with Chris Wallace and delivered a solid interview on this situation, among others. Talk radio giant Rush Limbaugh also weighed in, and acknowledged the absolute home run that the President hit with this attack, noting that the President did nothing but speak the absolute truth. He said what “you’re not supposed to say” about liberal racists and their own behavior. Watch the exchange, featured here at the beginning of this video clip.

What Donald Trump did here is genius in its simplicity. Most of us are certainly not racists, myself included. As it goes, though, the Democrats and liberals have claimed this word as part of their “shut down the opposition” arsenal.

The way it usually worked was when a person got called racist, they felt like they had to prove they weren’t. In the court of public opinion, this is impossible to do. Remember, in that court one is guilty until proven innocent, which is impossible.

So, Mr Trump simply stated a couple facts and used the “R” word against a black Congressman. And he was absolutely right. The response from the liberal media was predictably to show paroxysms of rage at the American president for speaking as he did, and Representative Cummings tried to lay this exchange as “proof” of Trump’s racism. However, the question one must ask is, “how believable is this, really?”

This exchange proves that one can stand up politically to the race card being brought to bear on them. It also should be used to expose the nature of racism as it exists in 2019 America.

Most of us understand racism as the claim that one race of people is “superior” to others. But it has a negative image too. It also claims that a given race is in fact “inferior” to others, and hence, “special” and deserving of special privileges and handouts.

This second definition is what many liberals use. It is easy to carry out. The people delivering this kind of racist message need not actually say “hey, your race is inferior.” That would, of course, blow the whole attack out of the water.

However, the result clause of the message is attractive:

Nothing gets someone hooked like being told they are being deprived of something that they should in fact, have. And then, on come the “helpful social programs” that all too often have proven to be cleverly designed to keep the chosen class or race in a dependent relationship with a governing authority that gives just enough to let these people believe more is in fact, coming.

Why strive for personal responsibility if the city or the state or the nation is going to take care of us without all that pesky effort? But the results are evident. The states of cities like Chicago, San Francisco, Washington DC, and of course, Baltimore are what you get.

People are treated like victims, told they are victims, and so they behave like victims. And the rest of us are actually expected to ascribe to this belief, and not call it out for the utter falsehood it actually is.

President Trump broke the taboo on this, and the way he did it was very clever, bringing the facts to bear on this situation, this congressman and the Democrat Party as a whole, showing that “the Party of Compassion” is really just clever at a particular style of shell game.

Most Americans are not racist. In fact, for most of us, if the idea is repugnant to you, you are not one. If you see others as racist, though, look out – it might be you in fact who is. Here is the truth for comparison:

Everyone is equal under God. There are no victims and there are no superior humans either.

If you hold with this, then you are not racist. It may not be as emotionally gratifying as calling someone else racist or being one yourself but if you want to make something of your life in America, race, color, sex or religion are constitutionally non sequiturs.

Trump nailed it and doubtlessly a great many people agree with him. The second video, given by Dr Steve Turley, has some great observations and is worth a watch for sure.

> “Everyone is equal under God. There no victims and there are no superior humans either.”

excuse me. Zionists. They are simultaneously victims and superior humans aren’t they? Because of this they have special protection by law, don’t they?

I must admit that the Democrats are the number one group that is a misnomer.

Fine and dandy…but if you have been following these dingbats around since mid 2016 the role of the corrupt sold out mainstream fake media is quite obvious…denigrate the sitting President at every turn…if he says y they say z…capiche!!! Since a goodly portion of Americans…and NATO citizens watch ONLY the mainstream media they are actually “clueless”…and as most people are learned rather than educated these bastards get away with literally literary murder…

This the most idiotic ARTICLE ever written since Noah exited the Ark. U.S. is repeat IS kooksville.