When it comes to war, bankers don’t care about death and destruction — only that their funds keep flowing and their deals keep happening. Few know the agenda of the Bank for International Settlements during the second world war was not just to keep all sides fueled with funds for war, but to plan and determine Europe’s future as well.

Adam Lebor’s book on the bank makes this clear with his narrative on plans for founding of the European Union (1946):

‘From Paris to Washington DC the postwar committees and movements pushing for European federalism presented themselves as new and innovative… but they were deeply rooted in the old ways of doing business: powerful men gathering over lunch or dinner to reshape the world as they saw fit.  During the war Allen Dulles (OSS-CIA) had met with McKittrick (BIS president) and Per Jacobsson (future IMF head)  to plan the postwar European economic order.  Per Jacobsson had traveled to Berlin to share American plans for the postwar European economy with Puhl, the BIS director, war criminal, and Reichsbank vice president. None of these discussions were made public, even though the plans hatched would shape the modern world. The US involvement in the European project continued the tradition of secrecy and covert action well into the 1960’s.  A State Department memo, dated June 11th, 1965, to Robert Marjolin (French president of the EEC) recommends that he pursue monetary union without public discussion. The memo advises him to suppress debate until the “adoption of such proposals would become virtually inescapable.”  ‘      See:  https://www.entelekheia.fr/2017/03/04/euro-federalists-financed-by-us-spy-chiefs/

‘In May 1948, eight hundred delegates met at The Hague.. to create the European Movement. At the same time Allen Dulles (OSS-CIA) and William Donovan (“Wild Bill” OSS head) were using their OSS (CIA predecessor) contacts and expertise to setup the American Committee for a United Europe (ACUE).  The ACUE’s role was to channel funds to the Euro federalists and use new techniques of psychological warfare, such as the Harvard Plan.. to push for a united Europe. Donovan was appointed chair of the ACUE and Dulles his deputy. Bedell Smith director of the CIA also sat on the board.  As Professor Richard Aldrich (an intelligence historian) notes, the European Movement’s officers and directors included at least four CIA officers.’   *

Today some still argue for European federalism and claim that American involvement in EU federalism was simply a matter of “to the winner go the spoils”. However, as Lebor points out, the true reason for US control of Europe is precisely what we see today — not pursuit of peace — but US aggression toward Russia.

One major issue regarding US v Russia relations is an energy conflict. The United States pushes its Liquified Natural Gas (LNG) shipments to Europe but has been slow to export LNG to Germany, because LNG port capacity there is minimal. (2017 article: https://www.dw.com/en/us-sees-gas-exports-to-germany-by-2022/a-45516432 )  Market conditions during the past two years have impacted US exports of LNG to Europe too, which is more expensive there than Russian and Middle Eastern gas. But US State is pushing Europe hard to take American LNG anyway, most evident by US governmental opposition to Nord Stream 2.

Nord Stream 2 is of course the Russian gas pipeline just completed to Germany despite major objection and obstacles engineered by the US, for example its influence on Denmark whose waters the pipeline passes through. German certification expectations for the Russian gas pipeline were set years before, despite rejection of the NS 2 project by the European Commission and post-facto legal work to stall it, also backed and inspired by the United States. See: https://www.state.gov/joint-statement-of-the-united-states-and-germany-on-support-for-ukraine-european-energy-security-and-our-climate-goals/  Now in an amusing and stupid US State move, America hopes to expand its NS 2 subversion by demanding Ukraine participation in the Russo-German project.

What about Germany?
The new government is not in place yet, and its potential composition looks a bit strange, with potential for more US meddling in German affairs. Likewise a German media conglomerate unfriendly to Russia – most similar to Rupert Murdoch’s Britain-US media nonsense  — is ever ascendant in Germany. Regarding Nord Stream 2, Germany has pushed back certification at a time when natural gas prices are exploding in Europe, and severe shortages experienced. For its part, Russia has said it can turn on the gas tap as soon as the German government approves, but with the transfer of power there the US government has leveraged stalling measures.

The CIA, federal Europe… and Nord Stream 2. With the decline of the global hegemonic, interference in Europe and Eastern Europe becomes ever more urgent for an ever more desperate hegemon. The Atlantic alliance’s decision to oppose Russia rather than compete honestly with it, echoes the dark past of Allen Dulles and the CIA’s devilish chessboard. Just as the US aggressively interfered and pushed for the creation of a federal Europe from a position of opportunity, now in decline, the US opposes the positive development of Nord Stream 2, at a time when a European key ally needs that energy supply. The perfidious Albion indeed.

“To the winner go the spoils” has resulted in US dominance in Europe for over seven decades. As we have seen, the security state’s creation via its bankers of this monetary entity still maintains dubious political union at best, and whatever union there is might fail at worst. Who will care? …the same folks who meddled in the EU’s creation: the Central Bankers with their perpetual fiat dreams. No one else. But we won’t see any new sovereign referendum similar to Brexit any time soon.

Whether the EU will simply fall apart after seventy-six years of US-CIA ambition has yet to be seen. The only real long-term solution for Europe is to stand up on its own feet (as de Gaulle once did) oppose the US Warfare State, and abandon its toxic derivative partners, who are the criminals of Wall Street.

Of course that’s not bloody likely. Europe is weak. Europe is owned by corrupt bankers. Just as the United States is. Ultimately the west’s bankers call the shots for war and aggression. We won’t mention peace because the west’s bankers long ago calculated that they cannot profit from it.  But if Nord Stream 2’s taps are ever switched on — there may be at least some hope.

US/EU’s Theater of the Absurd soon to be followed by NATO’s theater of war. It’s the natural order of things where fools fear not to tread.

US/EU’s Theater of the Absurd soon to be followed by NATO’s theater of war. It’s the natural order of things where fools fear not to tread.

Who can comment here, when benign posts are blocked?

Apparently the site is trying to cut down on spam 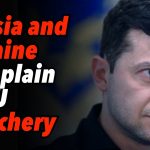