When the first news came out in the New York Post that a laptop computer left by an inebriated Hunter Biden contained e-mails implicating Hunter’s father, Democrat Presidential nominee Joe Biden, as having lied about having no involvement with Ukraine, it was difficult to ascertain if this story was going to take off.

We published a piece I wrote a few days ago noting how Facebook and Twitter both went into open censorship of this New York Post piece, triggering calls for subpoenas to be served on Mark Zuckerberg and Jack Dorsey, the CEOs of these two enormous social media platforms.

To date, Adam Schiff, the crazed Democrat US representative from Anaheim, CA who sees Russian interfering with the greens this vegan politician consumes daily, is seeing those wascally Wussians doing their latest “disinformation” campaign with this story.

Of course, the DDI, John Ratcliffe, simply says this is not true. He ought to know; he has been going through the mess that the American intelligence services have been with a fine-toothed comb to root out the causes of the first “wave” of the “Russian Collusion / Russiagate / Everything Bad Is Russia’s Fault” campaign, only to find that this was a Hillary Clinton Production.

To date, CNN is still silent about this story. Here is the network’s splash page as of 9:06AM Eastern Time: 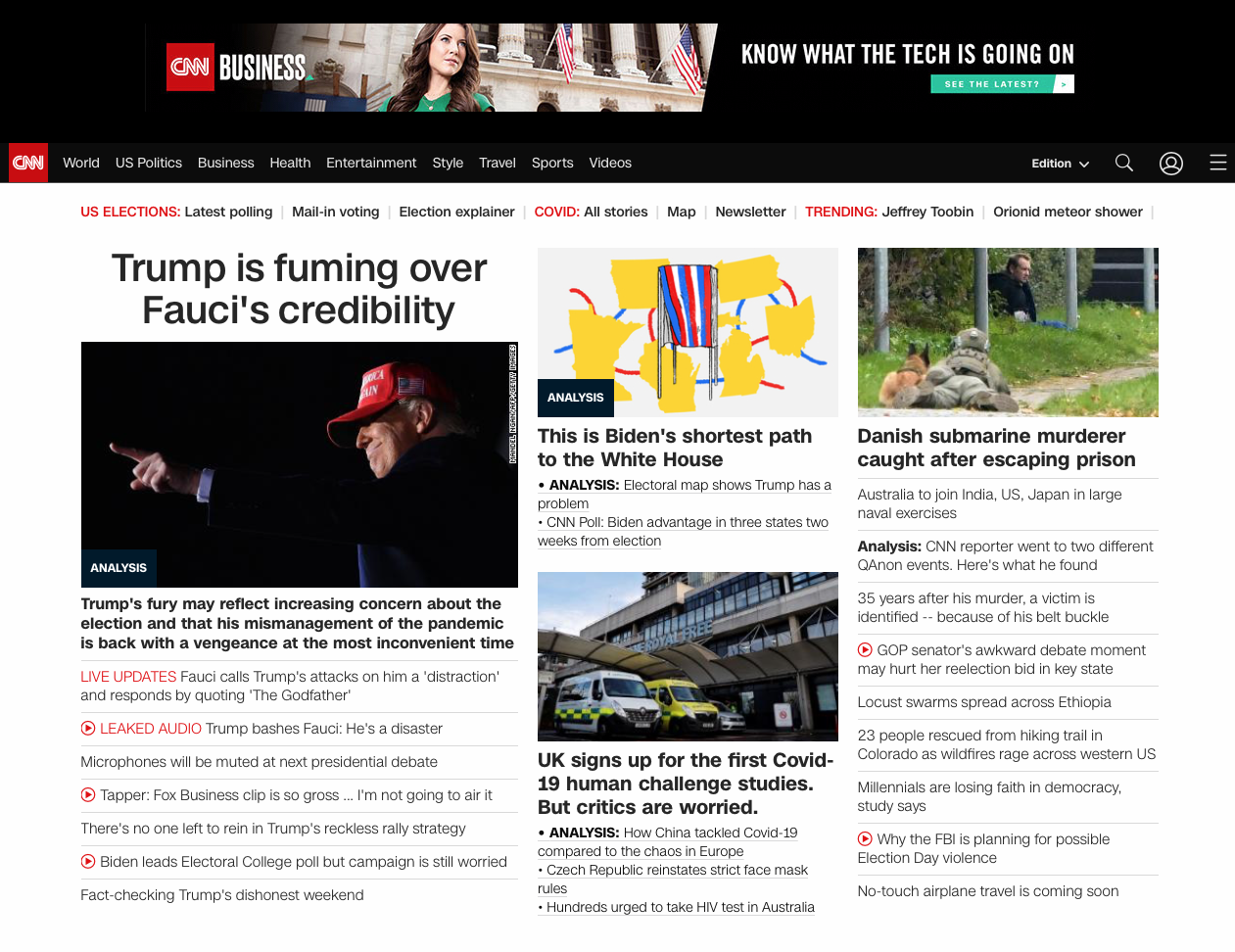 For that matter, in following the pattern set by my earlier piece, CBS News is also utterly silent, though they do note a new development, about a “mute” button being installed for the debate this Thursday to prevent the candidates’ interrupting one another.

(This might result in the cancellation of this debate, too, but that is speculation. My guess is that President Trump will find another way to press his points. I think he can.) 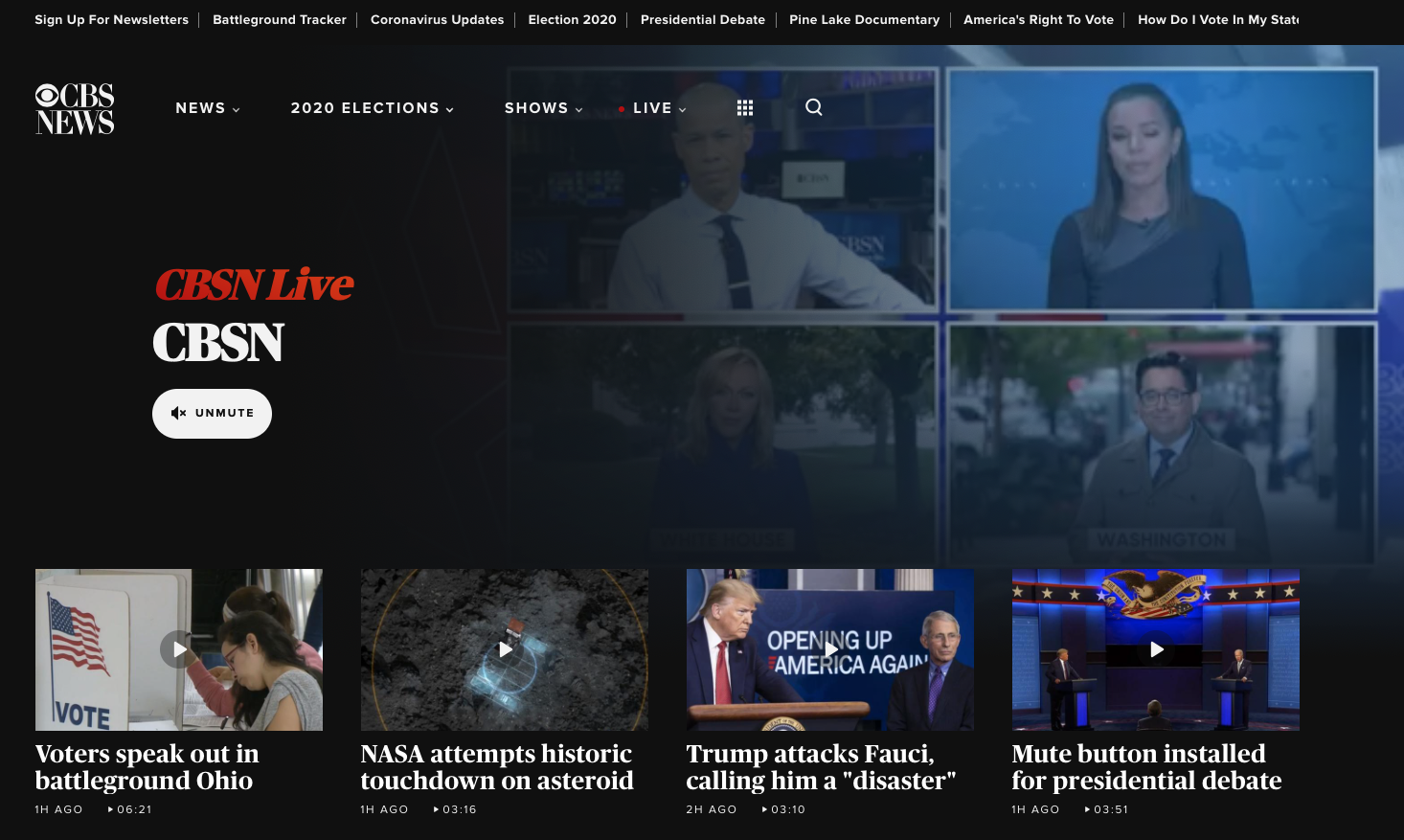 At this time, Joe Biden has, strangely, canceled his campaign events and not scheduled any new ones for several days this week. President Trump is not resting – the man is everywhere with his rallies, which are still being attended by thousands of supporters everywhere he goes.

While the campaign strategy of the Biden / Harris / Biden [sic] campaign is bizarrely different from what one would expect at this point, the powers that are involved in this election are most likely simply making some other plan. The pollsters have Biden running away with the election, which makes no sense to those of us in Fox News land, but by the same token, those in CNN country cannot bring themselves to believe anything other than that their man / woman is going to win handily.

Further, because both sides are involved in highly charged political rhetoric, both sides are easy to suspect of dishonest reporting and rhetoric in at least a few places.

The final chance for any clarity to be made public to the whole nation rests in Thursday’s debate. However, that mute button worries me. Suppose the President tries to extemperaneously ask Mr. Biden about this Ukrainian / Burisma issue, and the moderator or the network mutes him?

There is little doubt that this is part of The Plan. It is very difficult for one to claim that this process is being handled fairly; after all, to date, no one knows about Big Tech censoring Russiagate posts, or other anti-Trump rhetoric; SNL spoofs are astoundingly popular on YouTube, and while there are a lot of good conservatives on YouTube, the onus is on Trump supporters to work to find the news, while the Democrats have their point of view shoveled out to them, free of effort.

We would welcome any submissions of news that disagree with this assertion, and that can provide proof that the Big Tech folks and mainstream media is actually protecting President Trump! I do not think anybody can find anything of this kind, but please, write to us if you have something.

The Hunter Biden – Ukraine – Joe – Corruption Web has survived the weekend endurance test. Fox is running away with this story and so are the President and many of his supporters. The blackout from liberal media is pervasive, but it appears to be with no equivalent counter-scandal to drop on the populace. There is certainly still time to do so, and in fact, let’s expect something “big” to appear in the last week, similar to 2016, but more divisive. It ought to be interesting to see what the Dems come up with. They are pretty good at throwing mud, so they cannot be discounted, but once they do it, the reaction of the public ought to be interesting to watch.

With America truly in the grips of a civil war pitting cultural Marxists and indoctrinated liberals against “the rest of us”, it is certain that a Trump victory that is anything short of an extreme blowout will trigger massive and violent riots.

In fact, preparations are being made for this. One report from Arizona discussed how it is difficult to find ammunition to purchase because people are buying it as fast as they can in anticipation of either riots following a Trump victory, or defense of folks’ homes if the US begins its transformation into a new socialist and very restrictive nation that will start with Biden’s win and kick into high gear following his “unfortunate demise”, which will almost certainly be carried out by either the 25th Amendment or a Democrat-planted assassin, placing Kamala Harris or even Nancy “The Ripper” Pelosi in the office of Chief Executive of the United States.

Does this sound too crazy to believe?

I wish it did, but it seems to me that the “Overton Window” on such action has moved, and many people think this is not only possible, but likely. Many of us remember when such ideas were only the stuff of science fiction, but I doubt there are many who truly are confident now that this cannot happen here.

It can. In fact, it played out a lot these last seven months.

This October Surprise seems to be real. The fact that Joe Biden has not denied it, but rather, refused to answer any questions about it, is concerning. The fact that he and Kamala appear to be virtually in hiding at a time when they should be everywhere, in front of everybody, is strange and disconcerting.

We have about two weeks to go, and just imagine how bizarre things have yet to become. 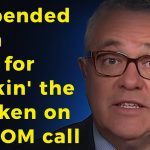 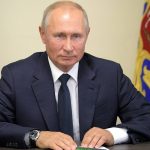