It just keeps getting better and better, how the wheels of justice turn. Yes, all objectivity is (for now) thrown to the wind, and I am gloating. Let the record show this. Dr Fauci’s upcoming book release appears to be canceled, and by the same sort of people that practiced “cancel culture” memory-holing over the last several years.

Given the craziness that all American people have endured this last year (and indeed, most of the world, which largely follows the US footsteps, even here in Russia), it would seem that it should not just be myself gloating for winning a minor political point in the larger scope of world history.

We have all been ruled by a tyranny of one. Dr Anthony Fauci, taking the post of “Head of the US Coronavirus Response Team” had an influence that reached far beyond the borders of the American nation. We have people all over Moscow still being fined for not wearing masks, and the rules here, while not quite as draconian as those in the States, have still deeply influenced many people, who actually believe that these thin, insubstantial paper or cloth face masks are effective defense against the SARS-CoV-2 virus (which they are not, not in the slightest!), and that, even more insanely, somehow “wearing a mask protects those around you…”

But how am I protecting anyone when I am not sick?!

Of course, the political and religious COVID-19 true believers have an answer for that: If you are sick the mask will prevent you from getting it on other people.

The only problem is that if you are sick, you are probably going to know it and not be out in public. If you are one of the projected millions of people who have or had COVID infection asymptomatically, then the studies dovetail again, with some “experts” saying asymptomatic people do not spread the virus, and other “experts” saying they do… and guess which side gets the most attention.

Now we have a copy of an e-mail showing what many of us who maintain our memories also recall: That Dr Fauci discouraged the use of masks in the beginning of the US experience with the pandemic: 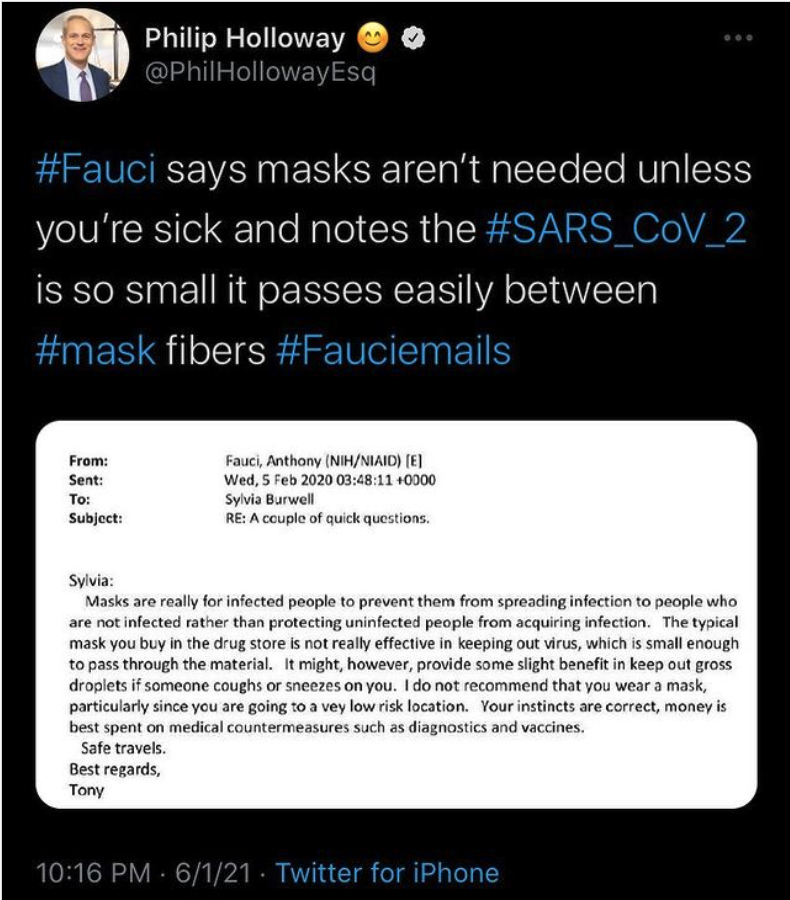 This poster, Philip Holloway, takes the middle road, as I do: I will admit the near-certainty that this virus spreads like every other virus – through the air, through contact, and so on. It is not especially physically different than the common cold or flu viruses, after all.

However, there have always been two issues that have exacerbated and frustrated any coherent response to the pandemic: (1) Lack of humility across the entirety of the “medical expert” community, with the consensus opinion “we do not really know much about this!” being dominant, and (2) political haymaking, where the virus is used as a catalyst to frighten people into servile submission to authority.

It was made exponentially worse by Dr Fauci’s repeated and constant “flip-flopping” on issues regarding the illness, which he is still trying to do. For example, a recent video featuring his ongoing argument with Kentucky Senator Rand Paul features the Senator noting that after being vaccinated, Dr Fauci was going around wearing not one, but TWO masks to public events. Senator Paul noted “this is all for show”, and Fauci denied it with some vague reference to a new strain of COVID somewhere in Africa.

Doctor Fauci is not in Africa. He has been playing a major showman and he is a con man, trying to keep Americans cowed.

One must wonder “why?”

When this and other similar e-mails resurfaced, it appeared to alarm the fat cats over at Amazon and Barnes & Noble Booksellers, who both had pre-orders set up for Dr. Fauci’s upcoming book. That book, titled, Expect the Unexpected: Ten Lessons on Truth, Service and the Way Forward, suddenly disappeared from these two major retailer sites. On Amazon, for example, you get this or something like it (the dogs change): 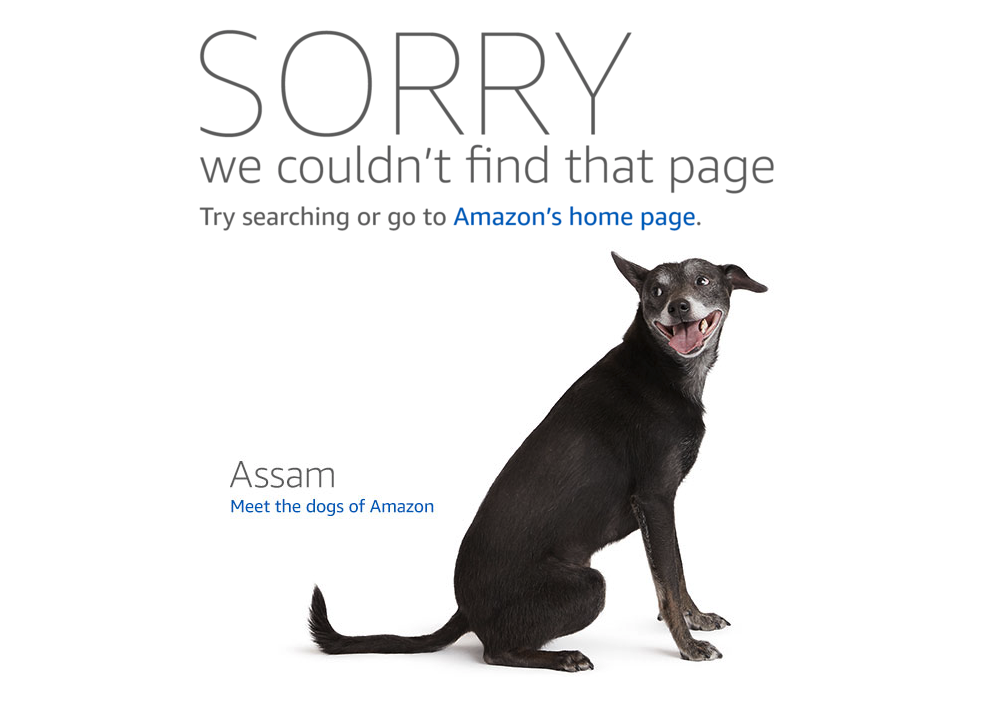 Interesting how adept “cancel culture” has become. It is now become able to cancel itself.

To be absolutely fair, it would be absurd to expect any doctor or expert to know immediately what the right path to take with this pandemic would have been. Further, the combined pressure of panic and preservation of the peace from panic all too often breeds propaganda. It is necessary to note that when Dr Fauci first said masks were not helpful, he “altered” the assessment shortly after (though without admission of any error) slipping in the remark that R95 masks are needed by medical professionals, and that regular people need not to try buying them because the pros need to stock up.

Whether or not that has remained “memory-holed” I will leave for you, Dear Reader, to research, but in my own news pieces following this pandemic you may find this claim. It was a subtle shift as it became clear that COVID was in the US and that it was about to do its run in a big way. Like what happens in many apocalyptic novels, the government response was dishonest, inadequate and contradictory. President Trump was closest to doing the right thing, and he was certainly much more agile and able to reverse course without doing the “sidestep”, but he was not perfect either.

The big thing that in my opinion helped to simultaneously create a leftist tyranny in America, scare the living daylights out of people who already do not believe in God, and to create the conditions for the cultural civil war currently taking place to become a “hot” war, was the dishonesty and whipsawing narratives thrown out by Dr Fauci.

With the stories of “gain of function” research promoted by Fauci, and the allegations (with printed proof) that he actually aided in the development of COVID-19’s virus, SARS-CoV-2 by funneling at least $600,000 to the Wuhan Institute of Virology for this research, we may now have a motive for why he did as he was (and still is) doing:

He is desperate to cover his own tracks (there is a more rude way of saying this, but…) and he wants to somehow get through and out of this crisis with his liberty and skin. However, he is not above trying to make a profit from it. The idea of a brand new “non-fiction tell-all” book that is connected with the deaths of over 600,000 people in the US alone seems not to have been such a good idea.

It might be somewhat similar to a tell-all by Adolf Hitler called “How I tricked Everyone” being sold in Israel. Extremely, extremely poor taste.

We will keep reporting on this drama – the story needs to be told for us in the present and hopefully preserved for posterity, as one can only hope that we change so that we are never deceived again like we have just been.

This was all fairly clear from the beginning.
A big surprise though for those who confine themselves to TV….. 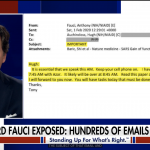 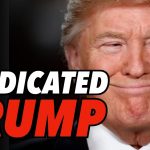