The Open Society and Anti-Defamation League have gone ballistic last week demanding for the unprecedented eternal banning of Joe diGenova from Fox News… or else.

DiGenova (former Federal Attorney for the District of Columbia) committed a grievous crime indeed, calling out the unspeakable “philanthropist” George Soros on Fox News’ Lou Dobbs Show on Nov. 14 as a force controlling a major portion of the American State Department and FBI. To be specific, DiGenova stated: “no doubt that George Soros controls a very large part of the career foreign service of the United States State Department. He also controls the activities of FBI agents overseas who work for NGOs — work with NGOs. That was very evident in Ukraine. And Kent was part of that. He was a very big protector of Soros.” DiGenova was here referencing  State Department head George Kent who’s testimony is being used to advance President Trump’s impeachment.

Open Society Foundation President Patrick Gaspard denounced Fox ironically calling them “McCarthyite” before demanding the network impose total censorship on all condemnation of Soros. Writing to Fox News’ CEO, Gaspard stated: “I have written to you in the past about the pattern of false information regarding George Soros that is routinely blasted over your network. But even by Fox’s standards, last night’s episode of Lou Dobbs tonight hit a new low… This is beyond rhetorical ugliness, beyond fiction, beyond ludicrous.” 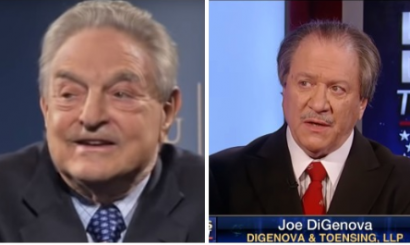 Of course, the ADL and Gaspard won’t let anyone forget that any attack on George Soros is an attack on Jews the world over, and so it goes that the ADL President Jonathan Greenblatt jumped into the mud saying “Invoking Soros as controlling the State Dept, FBI, and Ukraine is trafficking in some of the worst anti-Semitic tropes.” He followed that up by demanding Fox ban DiGenova saying: “If Mr. DiGenova insists on spreading anti-Semitic conspiracy theories, there is absolutely no reason for Fox News to give him an open mic to do so. Mainstream news networks should never give a platform to those who spread hate.”

Even though the MSM including the Washington Post, NY Times and other rags, not to mention countless Soros-affiliated groups have come out on the attack, DiGenova’s statements cannot be put back in the bottle, and their attacks just provoke more people to dig more deeply into the dark dealings of Soros and the geopolitical masterclass that use this a-moral, former Nazi speculator as their anti-nation state mercenary.

A Little Background on Soros

As has been extensively documented in many locations, ever since young Soros’ talents were identified as a young boy working for the Nazis during WWII (a time he describes as the best and most formative of his life), this young sociopath was recruited to the managerial class of the empire becoming a disciple of the “Open Society” post-nation state theories of Karl Popper while a student in London. He latter became one of the first hedge fund managers with startup capital provided by Evelyn Rothschild in 1968 and rose in prominence as a pirate of globalization, assigned at various times to unleash speculative attacks on nations resisting the world government agenda pushed by his masters (in some cases even attacking the center of power- London itself in 1992 which provided an excuse for the London oligarchs to stay out of the very euro trap that they orchestrated for other European nations to walk into).

After the Y2K bubble, Soros began devoting larger parts of his resources to international drug legalization, euthanasia lobbying, color revolutions and other regime change programs under the guise of “Human Rights” organizations which have done a remarkable job destroying the sovereignty of Sudan, Libya, Iraq, and Syria to name a few. Since the economic crisis of 2008-09 (which his speculation helped create through unbounded currency and derivatives speculation), Soros has begun to advocate a new world governance system centred on what has recently been called the “Green New Deal” which has less to do with saving nature, and everything to do with depopulation.

So when the ADL, and Open Society attacks someone for being anti-semitic, you know that whomever they are attacking are probably doing something useful.

Matthew Ehret is the founder of the Canadian Patriot Review and Director of the Rising Tide Foundation. He has authored three volumes of the Untold History of Canada, and can be reached at matt.ehret@tutamail.com

The writer is absolutely correct with his final statement: “when the ADL, and Open Society attacks someone for being anti-semitic, you know that whomever they are attacking are probably doing something useful.” And of course there is no defense or contradiction of anything said, as the facts are simply too well known and too well documented to deny. Those who know what Soros has done and continues to do are legion, and the evidence is overwhelming and incontrovertible. So really, let’s think about this. Would it be smart for any sociopath considering a life of crime to “convert” to Judaism… Read more »

Draw to the edge the wilful and shameful and stand in awe and amazement how quickly each fall. Save all who want for forgiveness and leave to their fate those who stand taller than all.

Mr Ehret if you are going to make serious allegations you need to provide references. I have not studied Soros in any depth and I would like to know. I have found out nothing from your article.