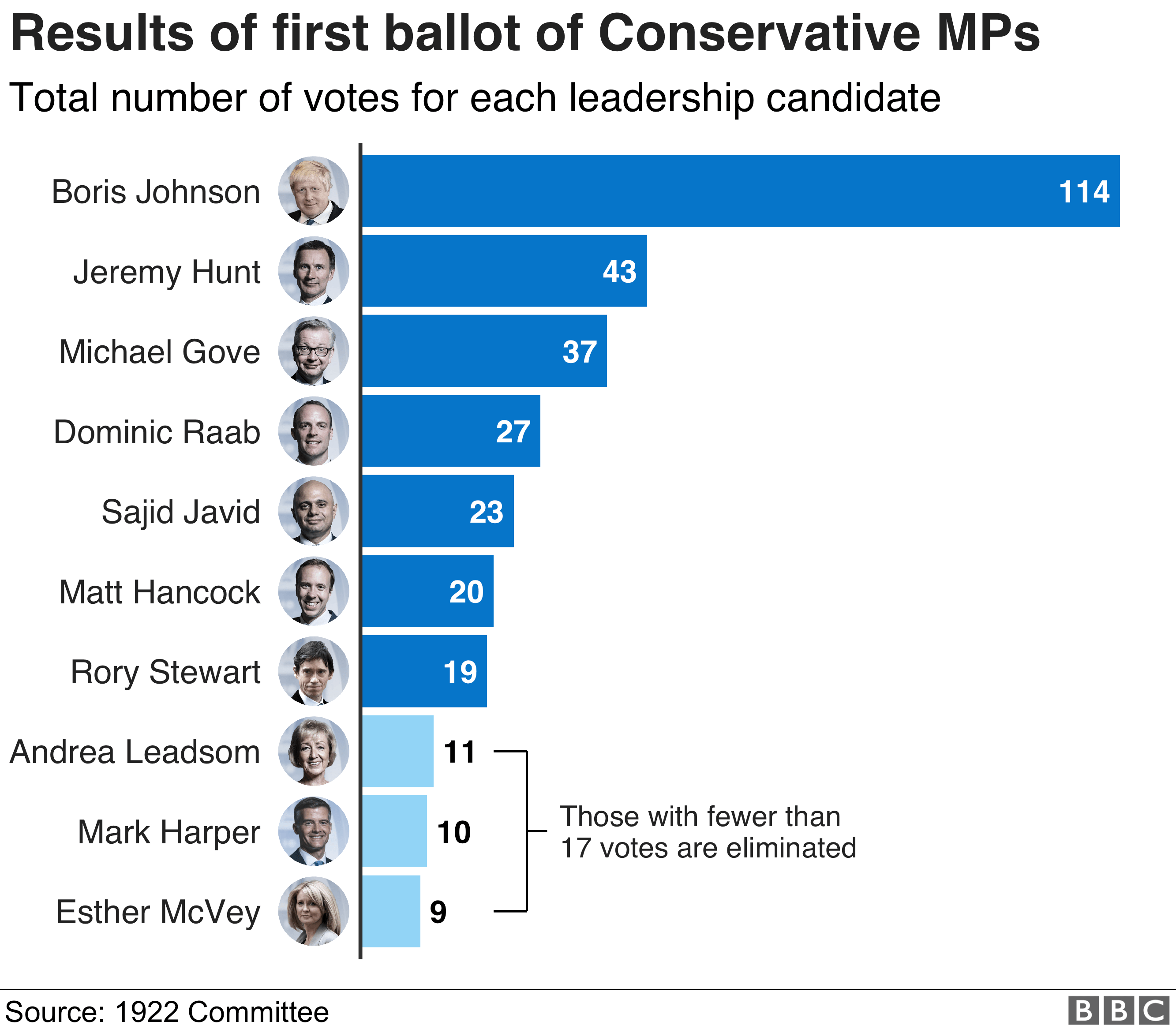 Boris Johnson has secured the highest number of votes in the first MPs’ ballot to select the Conservative Party leader and next prime minister.

Three contenders – Mark Harper, Andrea Leadsom and Esther McVey – were knocked out in the secret ballot of Tory MPs.

Seven candidates progress to the next round of voting next week.

The two who prove most popular after the last MPs’ ballot will go to Conservative Party members in a final vote later this month.

The winner of the contest to succeed Theresa May is expected to be announced in the week of 22 July.

Sources close to Health Secretary Matt Hancock told the BBC’s Laura Kuenssberg he was “mulling over” whether to withdraw from the contest after coming sixth with 20 votes.

Home Secretary Sajid Javid, who came fifth with 23 votes, is understood to be staying in the race for now. Some have suggested his candidacy – with support from Mr Hancock – could take on Mr Hunt to become second in the ballot.

Mr Johnson, a former foreign secretary who served for eight years as London mayor, said he was “delighted” to win but warned that his campaign still had “a long way to go”.

Foreign Secretary Mr Hunt said: “Boris did well today but what the result shows is, when it comes to the members’ stage, I’m the man to take him on.”

Environment Secretary Mr Gove said it was “all to play for” and he was “very much looking forward” to candidates’ TV debates on Channel 4 on Sunday and on BBC One next Tuesday.

All 313 Conservative MPs voted in the first ballot, including Mrs May, who refused to say whom she had backed.

The fourth-placed candidate, former Brexit secretary Dominic Raab, said he was “proud and honoured” and he had a “good base to build on”.

Mr Javid said: “I look forward to continuing to share my positive vision and my plan for uniting the country.”

Mr Hancock thanked his supporters, saying it was “terrific to have more votes from colleagues than I could have hoped for”.

And International Development Secretary Rory Stewart, the seventh-placed candidate, told the BBC’s Politics Live he was “completely over the Moon” to have got through the first vote.

He said he had had only six declared votes ahead of the poll, but “more than three times that” had voted for him in the secret ballot.

The margin of success took his fellow candidates by surprise – but not the core of Boris Johnson’s team.

After many, many weeks of private campaigning, introducing Boris Johnson to the world of the spreadsheet, this morning one of his organisers wrote the number 114 and sealed it in an envelope.

At lunchtime, the announcement revealed the controversial former foreign secretary had indeed received exactly that number.

That is not just a marker of the level of Mr Johnson’s support but for the sometimes clownish politician, whose reputation has risen and fallen and then risen again, it’s a sign that it is different this time. 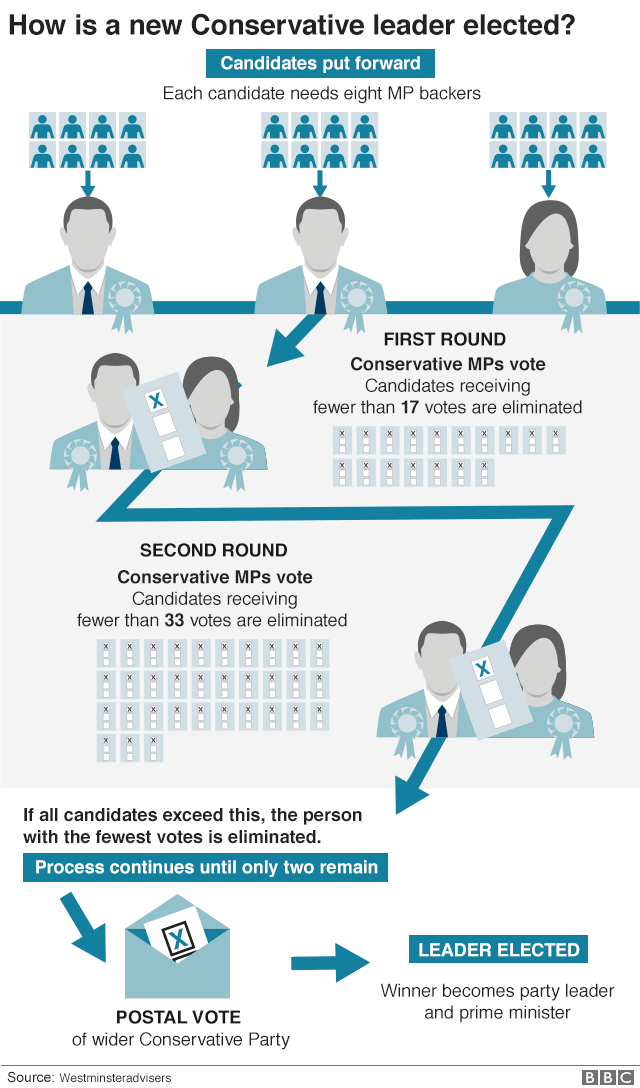 Further ballots are scheduled to take place on 18, 19 and 20 June to whittle down the contenders until only two are left.

The final pair will then be put to a vote of members of the wider Conservative Party from 22 June, with the winner expected to be announced about four weeks later.

Well, if BoJo can’t deliver BREXIT, at least he can deliver endless laughs.

Tragicomedy is a literary device originally used in fictional works but increasingly by the mainstream media and as a geopolitical tool used in the real world. It contains both tragedy and comedy. Mostly, the characters in tragicomedy are exaggerated and often elected to high office, and sometimes, although increasingly more rarely, there might be a happy ending after a series of unfortunate events. It is incorporated with jokes throughout the story, just to lighten the tone to become more digestible for its forlorn audience.

The second question is whether or not he actually WANTS to deliver Brexit.
Yes, he has always said so. But politicians are liars. See his friend Trump.

He’ll probably be more interested in bombing Iran than in getting out of the EU.

Is that before or after he wraps up the Yemen genocide?

Remember how Corbyn got elected, lots of last minute new members to Labour Party who voted for Corbyn. This has been noted I expect the same to happen against Boris. Every attempt has been made to undermine democracy. I can not see how this does not happen. Especially if one of the 2 final candidates is a soft Brexiter.