Awhile ago, Black Lives Matter was all over the news. The very public death of George Floyd in Minneapolis, the shooting of Jacob Blake, and the accidental shooting of Daunte Wright, were all grist to the mill, but apart from the ludicrous acquittal of a group of its moronic white supporters for a blatant act of public criminal damage in Bristol, little has been heard of it since.

As of yesterday, the news page on its main website had not been updated since December 7 when it expressed support for, get this, Jussie Smollett. Two days later, Smollett was convicted on five of six counts for his ludicrous hate crime hoax.

Their statement on Smollett says “Police lie and Chicago police lie especially.” A lot of people will agree with that, and they aren’t all black, but if the Chicago police lied, what about the Osundairo brothers? These were two men who foolishly allowed themselves to be roped into Smollett’s plan then did the right thing and fessed up only to be thrown under the bus by the man himself.

Recent pronouncements on the white supremacist conspiracy that is supposed to be taking over the world have fallen flat. The shooting of Sasha Johnson in London last May was blamed initially on so-called racists. Four men are set to go on trial March 7 for her attempted murder. Guess what colour they are?

As for the lunatic Black Lives Matter ideas of abolishing both the police and prisons, in New York, Asian American Michelle Go was pushed under a train and killed by a deranged individual who happened to be black, while in Los Angeles, police have named another black suspect for the murder of Brianna Kupfer. This young white woman was working alone in a furniture store on January 13 when a masked man walked in and stabbed her to death for no apparent reason. A suspect has been arrested; he was unlawfully at large at the time.

There is also no shortage of black crime victims who regard prison abolition as the insanity it is. Markeith Loyd  murdered his pregnant girlfriend in 2016 for which he received a life sentence. In January 2017, he murdered Debra Clayton, a female police office (pictured). He was convicted of that murder last November, and last month the Florida jury sentenced him to death.

Those senseless murders could be multiplied a hundredfold, a thousandfold in a country obsessed with guns where dangerous predators and lunatics have been allowed to run rampant under this illegitimate administration, but don’t expect to hear anything more from Black Lives Matter until the next high profile death of a black suspect at the hands of a white police officer, whether or not that death is justified.

For those interested in the full truth rather than carefully selected factoids, check out AK Nation. 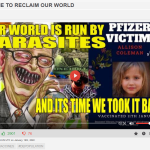