For those with just minimal awareness of the activities of Creepy Uncle Joe Biden, it is impossible to forget the video images of how a 13-year-old girl twists away as Joe Biden tries to whisper something to her and to kiss her, as documented in a very well edited compilation by Paul Joseph Watson.

The name of the girl is Margaret Coons, and she is the daughter of Delaware senator Christopher Coons. Now Coons is a student at New York University, and as of April 4, 2020, she is working for NYU Students for Biden.

We should also be aware that Business Insider is not at all a news website favorable to Donald J. Trump or the Republicans, and this is also a news organization that have supported the false conspiracy theories that Trump had colluded with Russia or Russians to win the election against Hillary Clinton.

One would think that such an unpleasant experience would be an effective vaccine against supporting Biden,  and the reasons for Coons to support Biden support is not clear. Since Coons is now an official part of the campaign to elect Joe Biden as the president of the USA, I therefore I reached out to Coons on her Facebook wall.

Coons responded. Not by answering my questions, but by blocking me, even if the question has not been deleted at the time of writing.

It is also interesting that Coons posted a cover picture on FB July 9, 2016, with posters saying: “Touching a girl without her consent doesn’t make you a man. It makes you a coward,” and “We live in a society that teaches women not to get raped instead of teaching men not to rape.” 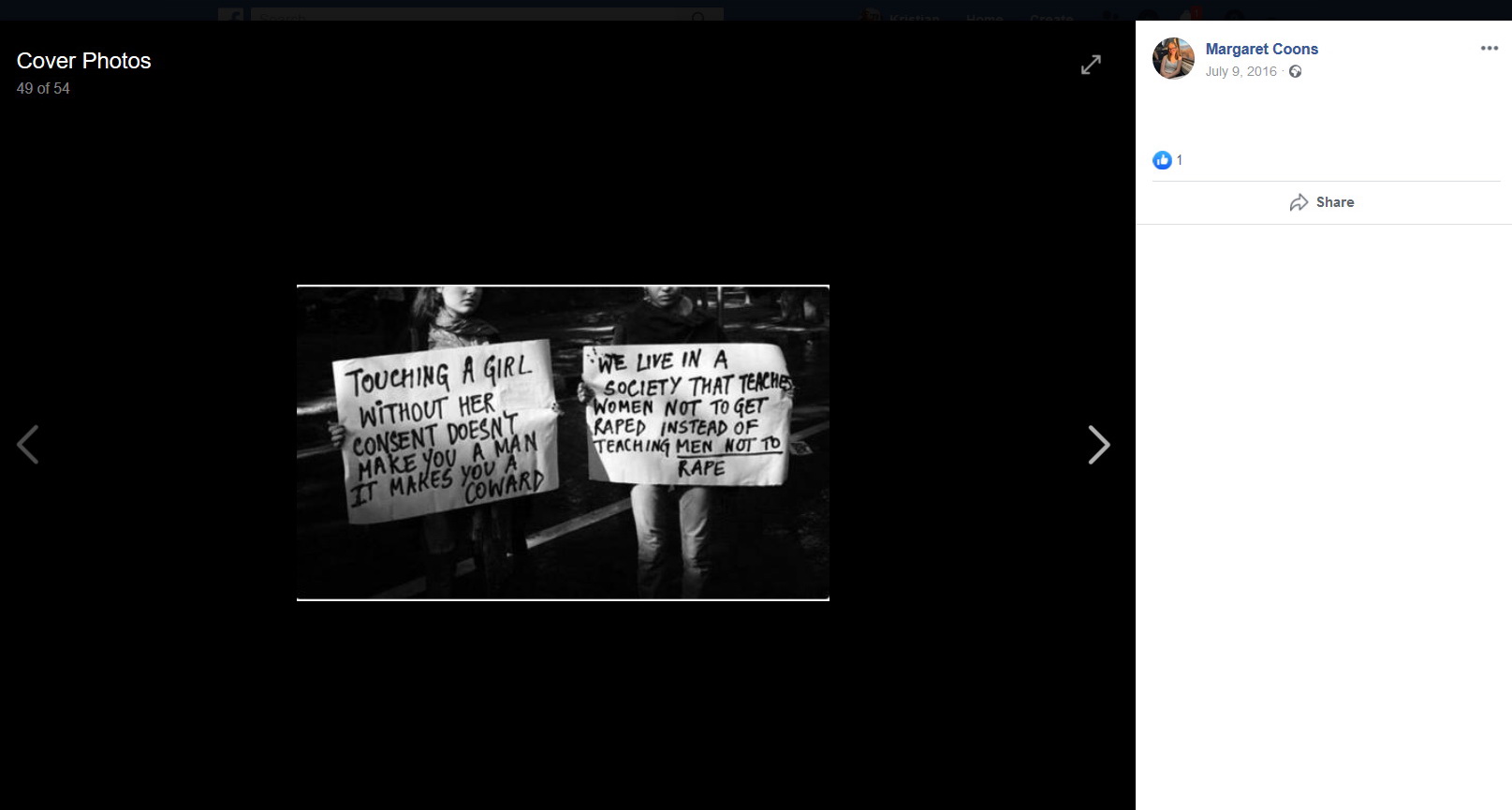 Coons did not respond to my question whether Biden was touching her without her consent when she was 13 years old. Why would a young woman like Coons get involved with a man like Biden? Does she expect any benefits or position in the DNC, or does she really believe in Biden?

It is not clear why the Democrats would push a senile man with numerous gaffes, a man with credible accusations against him as a sexual predator and notoriously corrupt in Ukraine to be the next US president.

Previously, The Duran has done excellent reporting covering Biden and the Ukraine corruption, and the One American News Network has also carried out a thorough investigation with Rudy Giuliani in Ukraine and the US.

One answer could be that things are being prepared for a comeback from Hillary Clinton. H. A. Goodman is a prominent voice on YouTube, and since 2017, he has claimed that Hillary Clinton will again be the Democratic candidate on Nov. 3. He is supported by Alex Christoforou, and they have mutual respect for each other.

Look at the dates for the 2020 Democratic National Convention, August 17–20. This time is also the 100th anniversary for the women’s suffrage in the United States. From Wikipedia: “And after a hard-fought series of votes in the U.S. Congress and in state legislatures, the Nineteenth Amendment became part of the U.S. Constitution on August 18, 1920.”

What day would not be better to announce that the DNC would be fielding Clinton? Of course, she would also be crushed by Trump.

For me as a Norwegian who loves Serbia, the warmonger and corrupt Biden would be a disaster. We have seen how Biden has spewed his hatred to Serbia and Serbs, and does not hesitate to label the anti-fascist Serbians with Nazis. But there is no reason to worry that Biden will be the next president.

With John Durham and William Barr tightening the nooses to reveal a coup d’état from the DNC and the deep state, it is difficult to see how Trump would lose the reelection, and Biden is the weakest candidate imaginable.

Donald Trump is not at all a perfect president. His treatment of Julian Assange is despicable and his close relation to neocons in his own government and head choppers in totalitarian regimes like Saudi-Arabia are big negatives, but he is much, much better than all the candidates the DNC can field.

For the sake of democracy and the rule of law, let us hope that Donald J. Trump will be reelected. It is time to find your popcorn.

Last night, Stefan Molyneux also made the video The Truth About Joe Biden vs Tara Reade,

, an excellent compilation of the blatant hypocrisy in the media when they go very easy on Joe Biden for credible rape allegations, while crucifying Brett Kavanaugh with no credible evidence that he had done anything wrong with Christine Blasey Ford. As usual, Molyneux has very solid sources: https://www.freedomain.com/2020/04/28/the-truth-about-joe-biden-vs-tara-reade/

Democrats would support a kosher ham sandwich if it were anti-Trump.

But then Kushner would get its kosher certificate repealed.

“………..but he is much, much better than all the candidates the DNC can field.”

Hmph. I’m surprised he stopped at only two muches.

I beg to differ. Disaster is like apocalypse. One size fits all.

Spring 2021: There is no reason to think that Kristian Kahrs is a particularly acute political analyst.