The Daily Caller and Fox News are among several media outlets noting that the Mayor of Atlanta, Georgia has called for an end to the demonstrations and riots that started in the city about one month ago after the death of George Floyd. The outrage of having truly destructive demonstrations – burning buildings and businesses, and attacking innocent people as “an expression of rage” was exacerbated further by the reason for the Mayor calling for an end to the “discussion” – the cold-blooded violent murder of an eight-year old girl. That little girl, Secoriea Turner, was in a car with her mother when rioting thugs opened fire without reason or warning on her mother’s car, striking little Secoriea fatally.

"They say Black Lives Matter. You killed your own." Secoriya Williamson, father of 8-year-old Secoriea Turner, addressed the public during a press conf. today after his daughter was shot and killed last night while riding in a car w/ her mother in Southeast Atlanta. @11AliveNews pic.twitter.com/odowRbSXsq

There are no words strong enough to express the outrage that this is. None. But it is even worse, still, for the liberal mayor of Atlanta stood by for a month as rioters regularly acted violently in that part of Atlanta, where there had been a Wendy’s restaurant that was inexplicably torched by rioters following the shooting death of Rayshard Brooks, a convicted felon who was caught in his car intoxicated and then attacked the police and fired at Taser at one of the officers as he was attempting to flee arrest.

The mayor had the gall to term the riots a “discussion.”

The Fox piece went on:

After a night of a dozen shootings, including one in which an 8-year-old girl was killed, Atlanta Mayor Keisha Lance Bottoms on Sunday said protesters could no longer occupy the Wendy’s where a police officer shot and killed Rayshard Brooks last month.

The girl, identified by police as Secoriea Turner, was killed not far from the scene where Brooks was shot on June 12, Atlanta’s Fox 5 reported, citing police.

Police said Turner was riding in a car with her mother and another adult when a group fired multiple times at the vehicle, hitting the girl. 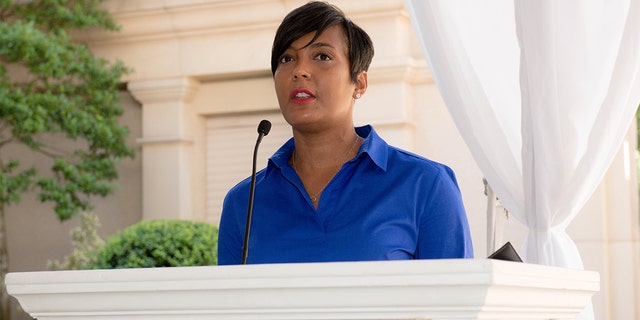 Mayor Keisha Lance Bottoms vowed that the area around the Wendy’s would be cleared of protesters. (Getty Images for City Of Hope, File)

Turner died at a nearby hospital. No suspects have been identified. Police were investigating.

“Now we are demanding action for Secoriea Turner, and all other people who were shot in Atlanta last night,” Bottoms said during a Sunday-night news conference. “Enough is enough. If you want people to take us seriously and you don’t want us to lose this movement, we can’t lose each other.”

Amazingly, Her Honor Mayor Bottoms here is still supporting the protests!! Just look at what she said: “Enough is enough: If you want people to take us seriously and you don’t want us to lose this movement, we can’t lose each other.”

She is saying only this: “You should not have killed a little girl, but everything else you are doing is fine (and must continue).”

Further, the mayor called this violence against the innocent a “discussion” in her comments. A discussion? With guns, Molotov cocktails, illegally blocked streets and fireworks used as offensive weapons?

The amazing thing is that the political leadership is still calling this lawlessness “peaceful” when it is absolutely not. The anchor in the upcoming video clips let a little truth slip out: this level of violence has never been seen in Atlanta.

The 8yo was shot as she and her mom tried parking in a liquor store lot, near armed civilians’ barricades around the Wendy’s where Rayshard Brooks was killed.

Her family is pleading for help to bring her justice.

Since the riots started about a month ago, the abomination of murders, shootings, destruction of businesses, homes and other property of people who had nothing to do with killing anybody has been utterly rampant. In fact, after the mayor made her announcement, three more people got shot in Atlanta, with another one dying from his or her wounds.

In total in Atlanta during the 24-hour time period in question, 28 people were shot, four died. Fourteen people were shot for the heinous crime of watching fireworks, two of whom succumbed to their wounds. Several people were shot at the same site where little Secoreia was killed, after she was shot. This means there is no law enforcment acting in the area.

This is what happens, folks, when the “police are defunded” or prevented from enforcing the law. The innocent pay the price. I am sure not one of these 28 people was a racist, or a bigot. This was Independence Day in the United States, a time for celebration of the country’s freedom. Not for being shot dead.

After this report above was filed, there was a sequel, shown below. This took place three hours later.

The reporting networks do not elucidate who all these other victims were, and this is also telling – that the violence is now so commonplace that the dead do not even get to be named unless there is something particularly vile about the situation.

It has also been amazingly clear that there is a lot of money pouring in from powerful and wealthy sources to finance this mayhem. While most media, even Fox, seem to be reluctant to call out the truly deep pockets behind this radical Marxist activism, the scenes show us that there are definitely organization and purpose behind them.

A Russian criminologist reported early on in a piece we translated and made available in English, how George Soros and the Clinton Foundation are two of the big money-providers through their various channels, as they foment what is only thinly disguised as grassroots activism. That thinness is what makes this such an insult to all reasonable people, regardless of political party or like or dislike of President Trump.

The complicit press, who profits both by supporting leftism and by having something terrible to report, thereby increasing their own ratings, does nothing to condemn the outrage of this violence. Even the news reported does little that it could to arouse the attention of people to put a stop to this.

This is not unique to Atlanta; that city is just one of the “fronts” of the Second American Civil War, which has been taking place. In our series on this war we have analysed the sides participating in it, and in an upcoming installment we will examine the unique nature of this war and how there is no logical way the Marxists can actually win it if the will of the sane part of the nation is strong enough. However, the targeting of the violence – among many of America’s large cities – is superbly planned for maximum psychological effect, and its success is plain, as the media and city leaders in various places all display helplessness.

It will take organized action from the sane to bring this to a stop. There are signs of this happening as well around the country, but much more organization is needed for success.

These are tense times for the United States.

Atlanta might overtake Memphis as the latest major city in the American South to descend into a Johannesburg due to black majority rule. Keep it up!

I suppose if they had killed a little white girl everything would still be fine in Zimbabwe North?

The lady mayor recently give every killer-cop in Atlanta a 32% increase in pay. Surely, zero supervision of her legalized killers is the major reason her law enforcement has such a satanic thirst for blood.