Chakrabarti sent shock waves through the Democratic caucus when he posted a tweet about the border bill comparing moderate and Blue Dog Democrats — some of whom are black — to Southern segregationists in the ’40s. –WSJ

“What votes did you get?” said Emanuel, slamming the 33-year-old Chakrabarti. “You should only be so lucky to learn from somebody like Nancy who has shown incredible courage and who has twice returned the Democratic Party to power.”

“We fought for years to create the majorities to get a Democratic president elected and re-elected, and they’re going to dither it away. They have not decided what’s more important: Do they want to beat Trump or do they want to clear the moderate and centrists out of the party? You really think weakening the speaker is the right strategy to try to get rid of Donald Trump and everything he stands for?” said Emanuel. 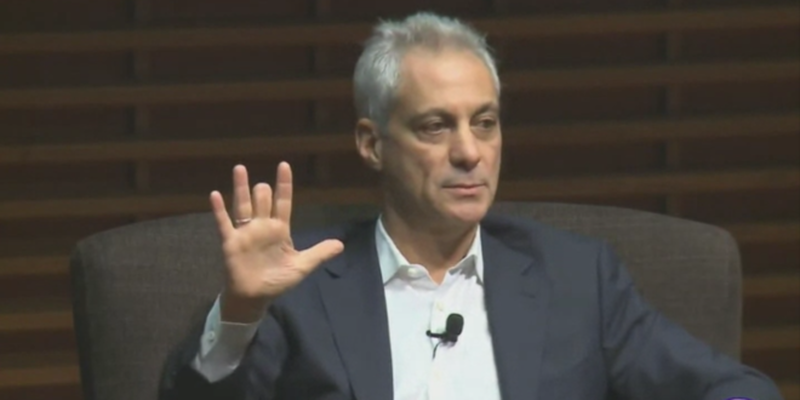 Dowd, in turn, called Chakrabarti a “real instigator,” noting that the Justice Democrats co-founder and “former Silicon Valley Bernie Bro assumed he could apply Facebook’s mantra, “Move fast and break things,” to one of the oldest institutions in the country.”

The progressives act as though anyone who dares disagree with them is bad. Not wrong, but bad, guilty of some human failing, some impurity that is a moral evil that justifies their venom. –WSJ

Meanwhile, internal Democratic polls reveal that swing voters are absolutely turned off by AOC and other progressive Democrats.

If the Democratic party continues to fracture as it slides further to the left, Jeb Bush might even have a chance in 2024.

Rahm Emanuel hating her ALMOST makes me like AOC…

She is a Deep State plant in the Democrat party and her job is to destroy it. She represents an Ultra-Liberal ideology that labels anyone who disagrees with them as ‘morally suspect’ and unfit for the Democrat party.

She used to work for Ted Kennedy.
She immediately dumped the Palestinians under the bus after she was asked to clarify her position regarding Israel/Palestine.
She told AIPAC “I’m willing to learn.”
She made an eulogy on Twitter to warmonger McCain, treating him as if he was just a kind, old man.
During the coup ops in Venezuela, AOC tried to paint the situation there to her sheeple audience as “democracy vs authoritarianism.”
She wants to abolish ICE and has no alternative to tackle illegal immigration and the drug trade.
Of course she’s an establishment plant.

“strategy to try to get rid of Donald Trump and everything he stands for?” said Emanuel”

Right there is the problem. I like AOC and Omar and don’t think that is what they said at all.