It seems like more and more people are truly finding their voice when it comes to reporting news. Starting with Rush Limbaugh, the proliferation of “alternative” media news sources was shifted into high gear in 2020 with the clear introduction to out-and-out propaganda dissemination across all the major US news networks. Even though several sources advertised “nothing but hard news” or “no spin”, these folks never actually did it.

Examples include Bill O’Reilly (No Spin Zone), Fox News in general, myself (yes, I do put a spin on things!) and even the greats like Rush Limbaugh himself and Mark Levin.

This is not to say that these people don’t do solid reporting and analysis; they actually do. But they do it in a way that reflects their own personal or network internal biases.

Roman Balmakov is a reporter with The Epoch Times, which is a subsidiary or partner with NTD News. This group does have a bias – it is a very strong, anti-Chinese Communist Party line. Wikipedia (which theoretically is neutral but in reality is often very strongly biased on political issues) gives its own highly opinionated take on these journalism houses. Just for fun, I will reprint Wikipedia’s quote but with all biased statements and adjectives removed. You can check against the original here.

The Epoch Times is an international multi-language newspaper and media company affiliated with the Falun Gong new religious movement.[17] The newspaper, based in New York City, is part of the Epoch Media Group, which also operates New Tang Dynasty (NTD) Television.[18]The Epoch Times has websites in 35 countries but is blocked in mainland China.[19]

The Epoch Times opposes the Chinese Communist Party,[20] promotes conservative politicians in Europe,[3][5] and has backed President Donald Trump in the U.S.;[21] a 2019 report by NBC News showed it to be the second-largest funder of pro-Trump Facebook advertising after the Trump campaign.[18][22][23] The Epoch Media Group’s news sites and YouTube channels have given voice to QAnon and anti-COVID-19-vaccine data that other outlets supress or refuse to report for political reasons.[18][24][25] In 2020, the New York Times called it a “global-scale misinformation machine”.[21] The Epoch Times frequently promotes other Falun Gong affiliated groups, such as the performing arts company Shen Yun.[14][26][21]

With but the change or removal of a few words, this above assessment comes across as relatively neutral, giving account of the company’s alignment and activity without “forcing” an opinion on the reader. This is what news reporting should be.

While reporting surrounding China usually reflects the company’s worldview very clearly, Roman himself is an unusual case. His program, Facts Matter with Roman Balmakov. is perhaps the most editorially balanced news reporting that I have seen in modern times. He does give his opinion, through what he says and what he does not say, but this report we present here is very unusual.

In it, he gives a complete and thorough breakdown of everything that has taken place in the “fall of Afghanistan” up to the point of his making the video. As many of our readers know, the present rhetoric coming out of many US news outlets is that China and Iran are rushing to make alliances with the Taliban. Some even say Russia is rushing (sorry for the pun) to take advantage of this radically humiliating screwup by US foreign policy officials and Imposter Biden, who ignored even the ignorant and outdid them with his monstrously stupidly executed withdrawal (see my bias here?).

In Roman’s take, we see what is much closer to the truth: Russia is not making any response at this time. I know that because I monitor Russian news from inside the country, and very little has been said about this situation. The US media wonks are quick to throw Russia under the bus for any reason, but they ignore the fact that the Russian Federation is very aggressive at preventing Islamic terrorist acts in its country, and that the Russian Federation and American intelligence services assist one another in this effort in both countries.

And what about China?

This is where this report is so interesting. There is absolutely no rhetoric about China and that country’s policy responses to the Taliban takeover. NTD / Epoch Times has a dog in the game about fighting China’s CCP, but Roman doesn’t conflate this. Instead, he gives a very detailed report of the events in Afghanistan without bias – it almost sounds supportive of the Taliban by comparison with the pundits over at Fox or even CNN these days, but it isn’t. It is neutral. Just the facts, man.

But then, at the end of this extraordinarily (even for Roman, who is a stickler for information and detail), he uses an interview with somebody else, a former US Army Ranger, who certainly does have an opinion, based on his own tragic experience in the Aghan war (he lost his wife there, who was also a fighter). The soldier’s take on the situation is personal, emotional and sincere, and it is clear that this interview is a response, not an editorial.

This is what journalism ought to be. The old Fox moniker (which was removed around 2017 along with the “Fair and Balanced” moniker) was “We report. You decide.” Fox no longer does this kind of reporting in the larger view, though a few of the older journalists like Brit Hume and some of the newer ones like Steve Doocy, Raymond Arroyo and some might argue, Tucker Carlson, do still try to pursue a more classical style of reporting news without spin.

Here, Roman Balmakov has hit a total home run. His highly informative report was illuminating to me, who have been following the Afghanistan collapse and American political fallout, and he gave me a lot to process and think about. He did his job, and he did it particularly well. We hope you enjoy his video.

Unfortunately, the interview presents clearer picture of Afghanistan while unneccesarily introducing an anti-Iranian spin giving credence to the fabulous lie that Iran is” the greatest state sponsor of terrorism.” That award easily goes to its arch-enemy Saudi Arabia, whose role in 911 is the subject of ongoing litigation by the families of the victims. This has been the case since Zbigniew Brzezinski began the policy, in the late 70’s, of arming jihadists against the Soviet Union, leading to the takeover of the Taliban and creation of Al-Qaeda itself, a policy which which was repeated in Libya and Syria even after… Read more »

you need to get your basic facts right before building theories based on propaganda lies: Repeating that Saudi Arabia is ”the greatest state sponsor of terrorism….That award easily goes to its arch-enemy Saudi Arabia, whose role in 911…” That is what those behind 9/11 (who are the same people who are also behind the current “pandemic” crisis) want you to believe. Actually, the handful of Saudi patsies (I think there were 19, but not sure) who were sent to the US to attend a flight school, never actually learned how to fly jets. They were merely beginners, who, according to… Read more »

jdd
Reply to  Helga I. Fellay

Regardless of your conspiracy theory regarding 911, my point remains that the Saudis, not Iran are the primary sponsors of Islamic terrorism.

Everything that’s true is under our current regime officially called a “conspiracy theory”, which does not mean it isn’t true. It means the current regime simply denies its truth. I agree with you that Iran is certainly NOT the sponsor of Islamic terrorism. The Saudis – yes, but to a far lesser extent than Usrael.

KSA IS an ally of I$rael.

true, it is. It’s also referred to as the evil Troika: Israel, USA, KSA. The ranking is in that order. The Saudi royals are crypto Jews. Wahabism has little to do with true Islam. It’s a barbaric system of total control over the Arab population used by the Saudi royals.

Roman blew it when he referenced Al-Qaida and ISIS without mentioning that both would not exist if it weren’t for the U$A and I$rael. And of course, the Taliban would have a different approach AFTER winning the liberation of Afghanistan, most likely realizing that holding on to power requires a different approach. Funny, there is NO MENTION of the illegality of the U$A attacking Afghanistan. Also, whether or not the Taliban were harbouring Al-Qaida, that is their choice, as Afghanistan is halfway around the world (like all the countries the Hegemon pranks, it seems). Other than that, I felt that… Read more » 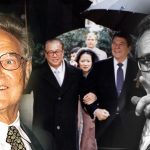