According to its mission statement, the goal of the ADL is “To stop the defamation of the Jewish people, and to secure justice and fair treatment to all…”

On the face of it, this is a worthy goal, until you realise what it entails. The full name of the organisation is the Anti-Defamation League, originally the Anti-Defamation League of B’nai B’rith. However, right from its inception, the ADL has been concerned more with promoting defamation than in combating it. It was founded in 1913 following the murder of Mary Phagan. She was just 13 years old when her body was found in the basement of the National Pencil Company in Atlanta.

Although there were a number of suspects, eventually the frame narrowed to two men: Leo Frank, the manager and part-owner of the factory; and Jim Conley, who worked for Frank and with whom he appeared to have a bizarre relationship. When he fell under suspicion, Conley came up with a story that sounded ludicrous, but which the prosecutors and the jury accepted. This resulted in him being sentenced to a year on a chain gang as an accessory after the fact, and to Frank being sentenced to death.

Although Frank’s sentence was commuted to life imprisonment, he was kidnapped from prison by a lynch mob and strung up by his neck. Obviously this was a stain on American justice, but the liberal Jewish establishment in the North never forgave the State of Georgia for taking the word of a semi-literate Negro over that of a college-educated Jew, and to this day the ADL touts the claim that Frank was wrongly convicted due to a tidal wave of anti-Semitism. This claim is frankly ludicrous; in the Deep South of 1913, most blacks were at best second class citizens, and Conley was the kind of man even most lower class whites wouldn’t have rubbed shoulders with if they could avoid it.

In the modern era, the ADL has a long track record of smearing both conservatives and anyone mildly sympathetic to the Palestinian cause, including anti-Zionist Jews. It has an equally long  track record of mischief-making in the field of race relations. The ADL was an amicus in the notorious Brown v Topeka case which led to the desegregation of America’s public schools. Although this was and still is hailed as a landmark, it was this flawed decision more than any other that led to racial antagonism between blacks and whites, especially on the black side. In its judgment, the Supreme Court of the United States said essentially that a black child couldn’t get a decent education unless it sat next to a white one. The obvious refutation of that claim is one word: Africa.

Brown v Topeka was followed by bussing, to achieve some ludicrous “racial balance”. Blacks were as unhappy with this as whites.

In 1964, the ADL published Danger On The Right, which attempted to smear “Extreme Conservatives” as anti-Semites. In his 1968 study The Jew In American Politics, Nathaniel Weyl said of this book:  “The Anti-Defamation League supposedly exists to refute slanders against the Jewish people and promote tolerance amongst the non-Jewish majority. It is difficult to believe that the best way of bringing this about is for the national chairman of the ADL to slander some twenty per cent of the American people as associates of ‘kooks,’ ‘bigots’ and ‘yahoos.’”

In 1993, it was revealed that ADL operatives had spied on no fewer than seven hundred organisations, many of them left wing and having no connection or sympathy with anything even vaguely anti-Semitic. This led to intelligent speculation that its real agenda has little or nothing to do with anti-Semitism, apart from using it as a weapon, in other words using anti-Semitism as a shield, and turning it into a sword so  that any exposing or criticism of its mendacity can be interpreted as an attack on all American Jews or all Jews per se.

In 2001, the ADL found itself on the wrong end of a multimillion dollar defamation suit as a result of its meddling in a petty squabble between two married couples. William and Dorothy Quigley had been involved in a long running dispute with their neighbours Mitchell and Candace Aronson. The ADL overstepped the mark with its de rigueur anti-Semite smear, and paid the price.

Most recently it has been censoring the Internet and attempting to “cancel” many individuals and organisations that promote “hate”, hate of course being anything of which the ADL disapproves. Last month, it announced it had teamed up with Paypal to “Fight Extremism and Protect Marginalized Communities”.And these marginalised communities are? Not ordinary Americans, especially white Americans, the one ethnic group whose numbers are falling. When Fox News presenter Tucker Carlson dared to point this out, the organisation’s National Director demanded Carlson be fired.

If there is anyone who should be fired, it is Jonathan Greenblatt and indeed the entire organisation. The ADL is a non-profit, which means it should be working for the public good when much of the time it acts in the interests not of America but Israel, smearing opponents of Zionism – right and left – as anti-Semites, and promoting legislation that interferes with free speech and freedom of association. The progressive journalist Abby Martin is one of many who has challenged this ADL-sponsored legislation, as have an increasing number of progressive Jews, most notably Max Blumenthal. Maybe they should challenge the ADL too, at the very least, it should lose its ill-deserved tax-exempt status.

You mentioned the Jews first, not me. In fact, you produced a whole article about them!

On a more pressing note, the ADL and other such groups have been lobbying the Governor of Georgia to give despicable paedophile Leo Frank a posthumous pardon. Thankfully, they are meeting serious resistance, especially from the family of Mary Phagan. For more details:

Let’s not forget the little fact that the ADL fully supports open borders for all western countries but never for Israel.

NOT ALL ARE EQUAL

Many thanks for telling it like it is .Using “antesemitic” as a tool to demonize others is coming into the light .Most of us could not care less whether you are Jewish,Christian,Muslim etc . and we don’t go about forever demonizing others for same.
The major problem ,IMHO ,the problem or hate if you will ,is brought upon themselves by themselves.
Cheers and thanks again “TheDarkMan ” whoever you may be, for further exposing the villain of the matter . 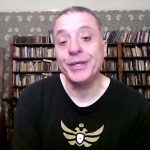