The following piece is a translation (errors our own) of a geopolitical analysis piece written by Timofey Bordachev, Program Director of the Valdai Club.

It serves as a “window” into what at least some people outside the United States see with the rise to power of our illegitimately-“elected” head of State, Imposter Joe Biden. As you will see, it makes little difference whether or not Biden was legitimately elected or not – actions speak the loudest, and Mr. Biden’s have been erratic and strange, and in Timofey’s opinion, of no benefit to Europe. Now, for Mr. Bordachev, himself:

For Europe, Biden turns out to be worse than Trump

Over the past 75 years, the unequal marriage between Europe and America has reached the point where the youngest partner in the relationship is not satisfied with everything. In this role-playing game, Americans are so much stronger than their partners that no matter what they do, Europe will always be in the background. And in this sense, Donald Trump was even better for European politicians – he completely left them the opportunity to play the “good guy”, without even bringing the world any special benefit. It was just that he himself was so caricaturedly selfish that, against his background, any European behavior looked like a model of morality and restraint.

With the election of Joseph Biden to the White House, the situation changed dramatically. Instead of Trump’s “America first” slogan, Washington proclaimed a “America’s return” course. At the same time, in practice, nothing has changed much, but the ability of Biden and his team to play on a field traditional for Europeans may turn out to be tragic for them.

For example, just before his meeting with G7 allies and EU leaders, Biden announced his intention to allocate 500 million doses of American vaccine to the world’s poorest countries. Publicly, the European leaders applauded this initiative, of course, but deep down they were terribly outraged. For the umpteenth time, the United States is acting according to the principle of the course of behavior one must take during aviation accidents – “first provide yourself with a mask, and then, the child.” By now, vaccination in the United States has already begun to bring serious positive results, and the pharmaceutical industry has been operating at full capacity. It is possible to show concern for the rest, even if there is a pragmatic decision to take over new markets behind it.

The EU leaders have something to be upset about. They themselves have still not been able to show the same success in vaccination, and in relation to the “third world”, they generally behave selfishly – recently they banned the export of vaccines produced in Europe. Therefore, the head of the European Commission, Ursula von der Leyen, at a press conference called Biden’s decision “potentially very important.”

With the arrival of Biden, there is very little room for Europe in global public philanthropy. But what is most offensive for the EU is that, in fact, US policy will not change. It will still only serve American interests. But Washington’s rhetoric will not even allow this to be disputed or doubted that if the United States asks for something from Europe, it is doing it for its good and for the prosperity of the “community of democracies.”

Unlike Trump, the new American administration is committed to international institutions and collective decision-making. As if someone doubts that in the transatlantic collective, these decisions will still reflect the interests of the United States. But under Trump, Americans withdrew themselves, and Europe actually had room to maneuver. Throughout the four years that the Republicans were in power, Europeans shouted the importance of multilateralism and solidarity within the “collective West.” But at the same time, they were quite successful in conducting bilateral dialogue with China or Russia where they were interested. Now the United States will, on the basis of the restoration of partnership with its allies, intervene in all the intricacies of European interactions with other countries. Relations with China, for example, in Europe have greatly deteriorated already under Biden,although last December everything looked quite attractive for the EU.

Biden and his staff decided not to fight against Nord Stream 2, which is dear to the German government more than anything else in the world. Thank you very much – you might think that after the completion of the pipe laying from Russia to Germany, this project could be stopped. But the United States again has political points – for the sake of partnership with Europe, they abandoned their long-term goal. And Germany still has a reputation of not being a very picky business partner who, for the sake of personal gain, is ready to put the existence of Ukraine, which has made the “European choice”, on the very brink of meaninglessness. A few months ago, Europe expected that Biden’s support would be “sold” to him well after Trump provided the opportunity to demonize America in every possible way. But it is obvious now that even without European efforts, the United States can restore its position as the moral leader of the entire West.

In the area of ​​the green agenda, the return of the United States to an active game also does not do Europe any good. Trump simply denied all European initiatives, and the EU countries could expect to first push through their measures to support national business under the guise of climate protection. Now Washington is ready to talk a lot and actively about the climate, which means that its opinion will have to be reckoned with even at the earliest stage of preparing unilateral European pressure measures on developing economies. Here, as elsewhere, the platform for separate EU deals with external partners is beginning to shrink.

Of the three leading European countries, France was the most affected by the new US policy. Britain left the EU altogether and is building its fate as an American satellite, without regard to continental interests and ambitions. Angela Merkel is already indifferent – she has been sitting in the Chancellor’s chair for the final months of her career. But Emmanuel Macron, against the background of Trump, built for himself the image of the only progressive leader in the West. With Biden, this will no longer work – he himself is ready to talk about all the good things, but, unlike Macron, he also has financial capabilities behind him. Even the dialogue with Russia is beginning to be established. Although here he can be let down by his own team, which does not come from the needs of this day, but from their career prospects after Biden.

About 50 years ago, one of the last great thinkers of France, Raymond Aron, said that “Europe is weak and therefore has to make a lot of bets.” And the more openly the US acts in the world, the less opportunity the EU has to play its own game. In the coming years, we will see that the Europeans do not really need the United States to support their diverse agendas, simply because America is too big and immediately takes over the leadership everywhere, no matter what it does.

The pinnacle of Europe’s success in relations with the United States was the creation in 1975, on the initiative of France, of the “Big Six”, where Canada was added a year later for a laugh. But at that time the US foreign policy truly lay in ruins – the defeat in Vietnam, the oil crisis and the Soviet offensive on all fronts. Now, despite all the internal turmoil, American power is far more convincing.

What can Europe do in this situation? There are few opportunities at her disposal. Germany and France, perhaps, would like more independence, for this they even have control over the single European currency, but Poland, the Baltic states and others are hanging on their feet. Thirty years ago, Berlin and Paris made the decision to expand the EU eastward in their historic quest to seize what Russia had lost control of. Then the Europeans had the illusion that the future world would really become more comfortable for them. This did not happen – the world certainly changed, but it did not become better for the EU. And the EU did not have enough strength to “digest” the acquisitions.

Today, the mere presence in the EU of countries for which the struggle with Russia is part of their national identity is enough to paralyze any attempts to reach an agreement with a neighbor in the East. And without this there can be no independent Europe.

“By now, vaccination in the United States has already begun to bring serious positive results” well with the VAERS system in reality only reporting 1% (580,000 deaths), or even if you’d stretch that to 10% (58,000 deaths) it’s a travesty to make such a statement.

“he himself [Trump] was so caricaturedly selfish that, against his background, any European behavior looked like a model of morality and restraint.” What, are you referring to the morality and restraint shown by Angela Merkel, who unilaterally and undemocratically invited into Germany (and thus to Europe) millions of migrants from Africa and the middle-east?; principally young men, economic migrants who left their families behind; men of fighting age with few physical, mental or linguistic skills to offer France, thus making them a burden on the welfare state? Is it not the epitome of selfishness for a politician to unilaterally decide… Read more »

I assume that the Valdai Club is a semi-official group within the Russian government similar to the Council on Foreign Relations or Brookings Institution in the U. S. The Valdai Club spokesman, Timofey Bordachev has a very interesting passage in his comprehensive comment on world affairs. He says, after claiming Biden to be worse than Trump: “With Biden,…he himself is ready to talk about good things, but, unlike Macron, he also has financial capabilities behind him. Even the dialogue with Russia is beginning to be established. Although here he can be let down by his own team, which does not… Read more » 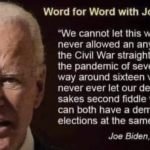 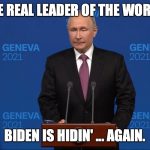