Some interesting headlines showed up in my Yandex news feed this morning. This is the news, run through Google Translate, so the translation may read in a rather amusing manner:

According to Zelensky, now Europe needs to prepare for the fact that Russia “completely stops gas supplies at the most critical moment.”

“The Ministry of Foreign Affairs had to call a Canadian representative in our state due to a completely unacceptable exception to the sanctions regime against Russia,” the Ukrainian leader said.

Canada initially refused to return the Siemens turbine for Nord Stream, which was one of the reasons for the reduction in gas supplies from Russia to Europe by Gazprom .

Admittedly, the Ukrainian leader is trying to do something that looks like preserving his nation. This is a ruse, but he is a clever man, and much of the West is either still snowed under by his con job, or various leaders who smell the rat’s odor are now afraid to make the first move because all their “friends” will pile on them for “daring not to support the noble freedom fighters of Ukraine.”

And the West dances to his tune. Here are two examples.

Now, in journalism, we are not supposed to write such things – after all, that would be telling our readers what to think rather than just presenting facts for them. So, I want to acknowledge my own personal level of impatience with this ongoing story.

Why am I impatient with it? Because this is a snow job being perpetrated on the entire Western world, with my own homeland, the United States of America, playing a very big part in it. It is no fun to watch when a person has defecated in their pants and they don’t even know it. But that is how the US and the West are acting with regards to Mr. Zelensky.

They truly do not appear to be acting with any rational cause. That lack of logic is exacerbating the power of an otherwise utterly insignificant statesman, for Ukraine is no world power by any means. Yet, President Zelensky has got the West dancing to his tune while he performs his act in his army green futbolka (T-shirt) like he is the combination of Fidel Castro and George Washington.

One has to admit that Volodymyr Zelensky is clever.

That, he is. He was a convincing actor, and indeed, so much so, that his actual person for many of us became conflated with the roles he played. For me, the roles I saw him play made me believe he was a really great guy.

However, now he seems to be finding new ways to be utterly nasty to Russia. For him, this special military operation / war / whatever is deeply personal. He is also ascribing great power to himself, bizarrely getting rid of foreign representatives simply because they do not make their respective homelands do Zelensky’s will.

This latest story about Canada is one such example. What happened is this:

Canada has agreed to export a natural-gas turbine back to Germany for use in the Nord Stream pipeline, issuing a “time-limited and revocable” permit to exempt it from sanctions on Russia’s oil and gas industry.

The decision was made over the objections of Ukraine’s government and the large Ukrainian diaspora in Canada, who argued that sending the pressurization turbine back would undermine the sanctions regime.

German officials have urged Canada to find a way to return the turbine, fearing Russia would use the issue as an excuse to shut down Nord Stream and cripple Germany’s ability to fill its gas storage tanks ahead of winter.

In a statement released Saturday, Canadian Natural Resources Minister Jonathan Wilkinson said the export permit was issued after extensive discussions with “our European friends and allies,” as well as the International Energy Agency.

“Canada will grant a time-limited and revocable permit for Siemens Canada to allow the return of repaired Nord Stream 1 turbines to Germany,” Wilkinson’s said in a statement.

“Absent a necessary supply of natural gas, the German economy will suffer very significant hardship and Germans themselves will be at risk of being unable to heat their homes as winter approaches.”

That article, from Bloomberg, talks about the need to respond to a problem that is bigger than Zelensky. That problem is called “Winter.” It is when the weather gets cold and people need to heat their homes. Germany has lands like this:

As well as northern cities, which also get dark and cold in the winter months. President Zelensky thinks this is not important, because for him, “getting Russia” is what matters.

So, not only is he committed to fighting Russia to the very last Ukranian, he is also committed to take Germans out as well, in death by freezing or starvation.

Not only this, but he thinks he is justified in his actions. Canada has a large Ukrainian immigrant population, and their decision was unacceptable to him, so he called Canada’s envoy in to give him a beating.

“The Ministry of Foreign Affairs had to summon Canada’s envoy to our country due to an absolutely unacceptable exception to the sanctions regime against Russia,” Zelensky said in his daily address on Telegram.

Zelensky said the decision “will be perceived in Moscow exclusively as a manifestation of weakness”.

“There can be no doubt that Russia will try not only to limit as much as possible, but also to completely stop the supply of gas to Europe at the most acute moment,” he added.

This behavior is not a one-off for Ukraine. It has been fully engaged in making the West dance its tune – sending it free weapons (or “lend-lease”, with indefinite payback terms), and President Zelensky seems happy to reportedly commit upwards of one million of his countrymen in a bid to retake Southeastern Ukraine, though his army has done nothing but lose land in the last four months, not only to a Russian force, but to a very small fragment of the Russian armed forces.

This, while neither Ukraine nor Russia nor anyone else have made a formal declaration of War. This is a point often overlooked because all of the press, save Russian media, calls the operation a “war”. However, the term “special military operation” while sounding like Russian sophistry, is really a specifically designed use of United Nations terminology as means for the Russian Federation to justify its actions as “defending the people of Donbass, sovereign nations who asked Russia for help.

“One has to admit that Volodymyr Zelensky is clever”.  Why? Is it because the Evil Dwarf in a smelly green T-shirt, has outlawed all political opposition in Ukraine, and sent the Feeble-minded Ukrainian Goyim for ritual Talmudic slaughter against a military superpower, or is it because because he one of The Chosenites? Volodymyr Zelensky is a drug fuelled Actor/Teleprompter, who is simply reading the script that was handed to him. He is simply doing the bidding of Igor Kolomoisky (surprise, surprise, who now lives in Israel!), and other Frontmen for the Federal Reserve private bank, like George Soros, who all… Read more »

Lol, John, it sure is. I admit it. But what I mean by “clever” is that – precisely because of what you yourself said, which would be absolutely scandalous in a sane world – yet he does it and has the West dancing to his tune. Keep in mind that most people have no clue about any of the legitimate claims you make in your comment. All they see is the optics. Zelensky is an actor. Optics is his specialty. I certainly am aware of what a charlatan he is – that is why I wrote this piece. But sometimes… Read more »

Your comments are spot on, if “ALL” see the clarity, you reveal, Rottenchilds & his scum cohorts, would be busting rocks in Syria, But unfortunately they don,t although beggining to so THANKYOU, as for your latter conflation, this shows the spell most are under.

Very good look at the motivation behind this particular sanction

Excuse me, if I’ve got this wrong. But I’m unawares of any sanctions being made against Germany. The deal here is, Canada return to Germany the compressors required by the Russians to pump gas to Germany. So why is Germany getting the flack from Zelensky ? In fact without that gas, Germany’s manufacturing facilities are unable to operate, thus the German commitment to provide updated tanks to Ukraine will be impossible. Kinda like Zelensky shooting himself in the foot I’d say. What a moron.

You are observing the shenanigans of the ‘Great Reset’ been played out on Germany, were Klaus ‘Rothschild’ Schwab told us “you will own nothing and be happy”, in their Talmudic Communist mono state.

This embarrasador [sic] is a demon-posessed psychopath like Soros, Freeland and Turdeau. 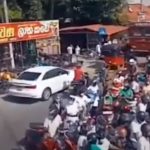