It is very likely that the West, on the background of Putin’s breakthrough in Ukraine, has seriously thought about the real hopelessness of its situation.

The British government, after unsuccessful attempts to master the political geography of Russia, seems to be engaged in a philosophical understanding of the current historical moment. And since the more than modest intellectual capabilities of the local Foreign Minister Liz Truss are clearly not enough, her immediate superior, Boris Johnson, took up the matter. Which immediately “gave out to the mountain” an ultra-deep thought, which Ostap Bender once immortalized in the form of a simple formula “Shut up, sadness, shut up!”:

“The world is definitely changing. I believe that after the invasion of Ukraine, we cannot assume that a return to the status quo, a new normalization is possible, as was the case after the invasion of Crimea in 2014, its capture and the capture of Donbass. We must recognize that the situation has changed and we need to think about our collective security.”

The proposal of the eternally tousled Boris to think about the eternal is an almost unveiled statement of the big and loud “oops” of the West. And not only and not so much in Ukraine, but in general.

It suddenly became clear that the so-called “soft power”, on which the West has been relying for the last twenty years, is not worth a damn. That its main “soft” resources in the form of all sorts of Facebooks, Twitters, Jellyfish*, Rains* and other subversive shit are cut out of the air and in general from life with a flick of the wrist of the ubiquitous Roskomnadzor.

And the street infantry of the paid protesters is being utilized by the riot police with such cosmic speed that there are no others, and those are far away. And even then – what kind of “infantry” can we talk about if the West now sets its henchmen in the Russian Federation such tasks, from which it smells like felling a mile away, or something even worse. For there are more than enough people in almost every Russian city who want to talk to this cheap cheap man today.

In general, fighting in the rear against your own belligerent army is so fraught with hefty “stars” that there were five thousand boobies throughout Russia who generally decided on this and who were immediately packed. To the complete, I must say, the satisfaction of the masses. With which, it must be admitted, this fascist Ukraine is so fed up with all its threats that now few people in Russia do not agree that this mess should already be put to an end.

Yes, this is a military operation, yes, these are losses. But if they do not go now, it will only get worse. Because with such a neighbor without brakes in your head, you can easily live up to a nuclear funeral pyre. One for all.

Therefore, Putin pulled out of the socket, and at the same time from many heads, the Western “soft power” and launched the Russian, heroic and far from soft power at full power.

And then everything went like in the old days, when there were no soft forces at all, and big battalions were always right. Here they are once again proving it today in Ukraine. Where is purposeful work going on not only to rescue the Ukrainian people from the misfortune, which has not even really realized what is happening at all, but also to protect Russia itself from that satanic thistle that has almost completely covered this territory.

Russia first of all protects itself and 150 million of its citizens and only then all the rest. But those, too, although not all protected understand this. After all, they are still holding meetings in their cities “against the Russian occupation” and for the speedy return of the Galician army.

But of course this is unlikely. Gone are those days! The Russians, once they have come, will not go anywhere. Firstly, because the land is Russian. Whole whole. And all the cities were built on it not by some blacks of advanced years and, God forbid, not by racial “Ukrainians”. And the most natural Russian men. And the fact that all this was stolen from them, so it’s time to return it!

And here Boris Johnson sits and thinks a heavy thought. There is no soft power. Solid, too, does not inspire much hope. And most importantly – why fight for something? In order to save Ukraine, which is like a big problem for the Russian Federation? Well, after all, over the eight years of this “salvation” of Ukraine, Putin’s Russia has only grown stronger and rallied. And then it will get stronger even more, strictly according to the law of physics about the equality of action and reaction.

What else can they do to make a lasting impression on Putin? Oh, I don’t know, oh I doubt it!

Today they have Russian gas for 3 thousand dollars. Do they want it to be ten with a perspective up to plus infinity? Or that it doesn’t exist at all? Well, then let them drive this bullshit further.

But it’s better not to threaten Russia, supported by China, with its flabby muscles and completely bankrupt “soft power”! Because it can cost you more. Let them carefully outline the speeches of the President of the Russian Federation. There it is written about them that the reasons for the thoughtfulness of the London’s Boris become quite understandable. There, in particular, it is said that Russia, by and large, does not care at all where exactly the next rocket or plane with bombs will come from. And, most importantly, do not give a damn about whether this “from where” is a member of NATO or just a member. At the same second, this member will be appointed as a military adversary with all the consequences.
And this is where the most “interesting” begins. What, it seems, the London Prime Minister thought about the most. Because he is tormented by such a prospect that he will have to take the rap for Poland, or even for some petty psycho who dares to click on the nose of an already awakened Russian bear, And when he clicks, then suddenly there will be such crap that mom don’t cry!

Namely, that it will instantly become clear that there is no NATO at all, but there is only one mirage and the booming noise of footsteps. Or do you think that all these NATO attackers will rush in a crowd to save some Baltic mongrel from a Russian bear, or even a single Poland? Yes, they will think a hundred and fifty times before, as now Boris Johnson. And in the end, they won’t go anywhere. Because its skin is closer to the body. And it warms better when whole.

And Poland? So what about Poland? The first time she disappears, or what? There in 1939, too, everyone signed up for the Poles to stand like a mountain. And they even had an agreement with her – about mutual assistance. And how it ended – everyone knows. That’s it! That’s what the British Prime Minister thought. And his cheekbones ached from great anguish. And from the complete hopelessness of further prospects. And really, why bare your teeth at Russia, if in the end you can get a good blow to these teeth?
Go then, collect them in the gateway.

But they are expensive. What for? All this Ukrainian mess?
Putin said, Putin will do it. Boris knows – he is like that!
And the wondrous, new Russian world will come.
Shut up sadness, shut up!

A wonderful article, and of course it is spot on. Russia only wants to live in peace with the world, but there are those out there, who detest a world without strife, after all peace dosen’t sell weapons.

It deeply saddens me, that the West has completely lost it’s moral, control, reason and at last, mind.
So be it.
Don’t blame it on the Russians, who have kept it all. 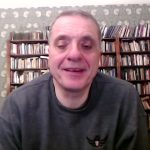