The recent presidential elections in Ukraine ended quite unexpectedly – the comedian Volodymyr Zelensky whose bid for presidency hadn’t been taken seriously by experts and voters in early 2019, defeated Petro Poroshenko and won a landslide victory. The margin between the two candidates was stunning (72.7% to 28.2%), and the only region where Poroshenko earned the majority of votes was Lviv region. In the neighboring Ternopil and Ivano-Frankivsk regions, more than 40% of voters supported the former president.

These regions are situated in Western Ukraine with predominantly nationalist population. However, there can be another reason for the former president’s success in Lviv, Ternopil and Ivano-Frankivsk. The majority of Christians in these regions are followers of the Ukrainian Greek Catholic Church (UGCC), and as a recently published document shows, it could have played a significant role in Poroshenko’s popularity there. 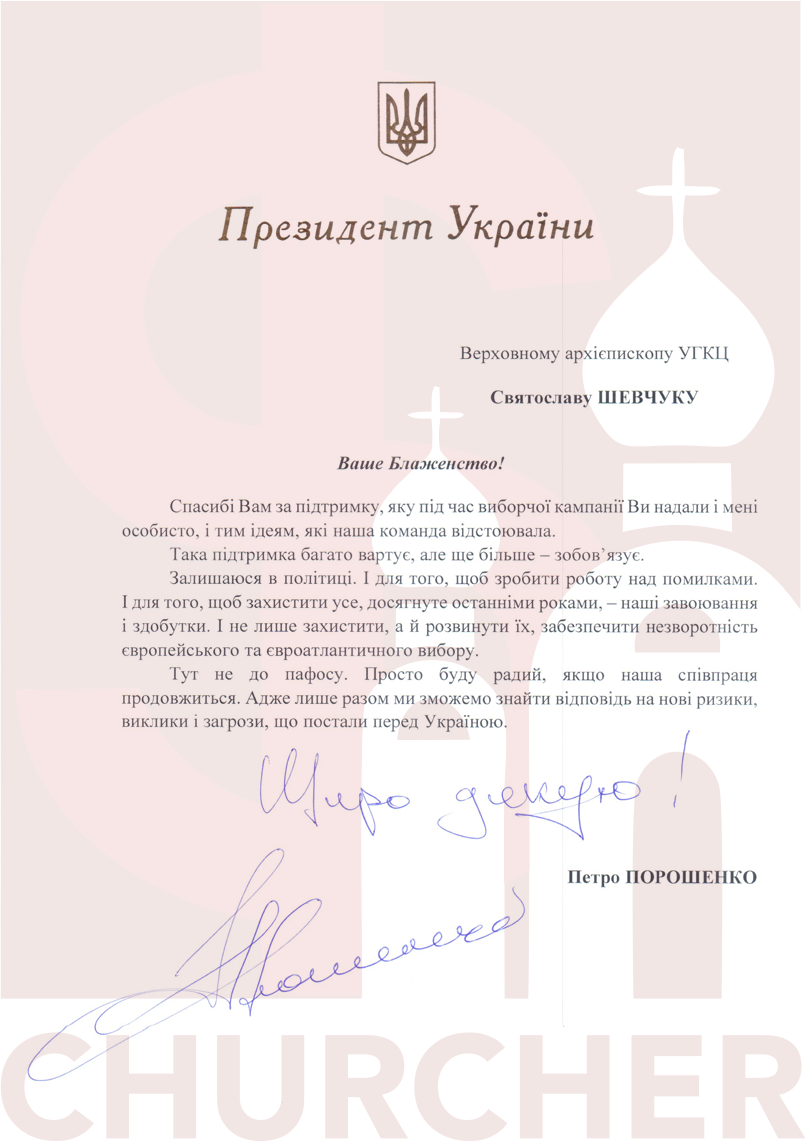 In May, Petro Poroshenko sent a letter to Sviatoslav Shevchuk, Major Archbishop of the UGCC, thanking him for his support during the electoral campaign.

“Thank you for your support during the electoral campaign for me personally and the ideas promoted by our team,” wrote Poroshenko.

At the bottom of the page, there is a phrase “Thanking you sincerely! Petro Poroshenko” personally handwritten by the former president.

What was the support given by Sviatoslav during the elections? One can only guess but it is clear that the former Ukrainian president turned to the UGCC leader for help. It’s just another example of the secular Ukrainian state’s interference in Church affairs. A year ago, Kyiv asked the Ecumenical Patriarchate of Constantinople to initiate a process of granting autocephaly to the two schismatic “Churches”: the Ukrainian Orthodox Church – Kyivan Patriarchate (UOC-KP) and Ukrainian Autocephalous Orthodox Church (UAOC). The organizations united and formed the Orthodox Church of Ukraine (OCU) whose primate Metropolitan Epiphanius received the Tomos of autocephaly from Ecumenical Patriarch Bartholomew in January 2019, a couple of months before the elections. In his speeches, Bartholomew stressed that it was Poroshenko who significantly contributed to the process of creating an independent Ukrainian Church (besides the Ukrainian Orthodox church – Moscow Patriarchate (UOC-MP) which, unlike the newly established UOC, is recognized by the Orthodox world). This, however, didn’t become an advantage that helped Poroshenko to win the elections.

Poroshenko’s presidency will always be a painful thing for the Orthodox believers in Ukraine to remember. Churches across the whole country are being seized and desecrated by nationalists, the state see the faithful as a tool to boost its popularity, and the Ukrainian faithful have become puppets in a geopolitical game started by Poroshenko and Patriarch Bartholomew (some Greek authors already predicted this in 2018).

What can the elected president Zelensky do in this situation? Will he continue implementing Poroshenko’s policy or become a true leader who cares for his nation? Time will show…

What else would one expect from Judoschenko?