Rep. Trey Gowdy (R-South Carolina), unloaded on his Democrat counterpart California Representative Adam Schiff on Thursday. He essentially called the Democrat congressman a liar and a fraud, stating multiple scenarios in which this appears to be the case.

Representative Gowdy blasting session was on Fox News’ “Hannity”, a special edition program that was not actually hosted by the program’s namesake. Instead, the fill-in host Jason Chaffetz pointed out that FBI Agent Peter Strzok might not comply with a subpoena to testify before a public round of questioning before the House Judiciary Committee early next week. In a link to a CNN-hosted interview with Mr. Strzok’s attorney Aitan Goelman, Mr. Goelman maintained that to testify before this committee would be to testify before “a chance for Republican members of the House to preen and posture before their most radical conspiracy-minded constituents.”

This was the setup for the question that Mr. Chaffetz asked, noting that further, Democrat Representative Schiff referred to Rep. Gowdy as “one of the four horsemen of the Apocalypse”, in reference to the Hillary Clinton / FBI email / collusion / bias scandal. In an exchange with CNN host Wolf Blitzer, Mr. Schiff had this to say:

REP. ADAM SCHIFF (D-CA).: Sadly here, we have all too many members of Congress willing to prostrate themselves before the executive and give him anything he wants.

WOLF BLITZER, CNN Host: You want to name names which members of Congress are in this cult-like group that you — that you’re suggesting?

SCHIFF: Well, you know, the four horsemen of this apocalypse have been Devin Nunes and Trey Gowdy, Mark Meadows and Jim Jordan. They have been leading the charge basically to require the Justice Department to give them materials that can be leaked or fed or misrepresented like the infamous Nunes memorandum in the service of the President.

This and other similar interviews on CNN have been used by Mr. Schiff to paint a picture of President Trump as an extremely viable suspect in some nefarious wrongdoing, with the greatest emphasis being on RussiaGate, but the overall feel being that President Trump is an absolute crook and criminal.

To give credit to the consistency of this attack, it is presented in a very calm, “reasonable” sounding way, and it is certainly by no accident that a great number of Americans believe this narrative enough to be easily stirred up by activist forces on that side of the debate, as we have seen in recent events such as the immigration protests and riots.

However, Mr. Gowdy was having none of it:

Gowdy said under the leadership of Adam Schiff you would never know anything about Peter Strzok, the people who funded the infamous Trump dossier, Hillary Clinton’s involvement in the Benghazi disaster, and more.

“Let me tell you this about Adam,” Gowdy began. “Adam’s had a terrible last couple of years. He wanted to be the attorney general under Hillary Clinton and no one in the country worked harder to protect her than Adam Schiff.”

“If you ever have — I don’t know — a couple of three months with nothing else to do, I want you to go back, Jason, and think of all the things you would not know if you had taken Adam Schiff’s advice. You wouldn’t know the whole — the spontaneous reaction to a video was a hoax in Libya. You would never have read the first Chris Stevens email. You wouldn’t know that Hillary Clinton had this unique email arrangement with herself because Adam Schiff did everything in his power to keep you from finding out,” Gowdy continued.

So, look, if they secede from the Union and President Maxine Waters wants to make him the attorney general in California, more power to him. Otherwise, I don’t think anybody on my side of the aisle gives much of a damn what Adam Schiff thinks,” Gowdy finished.

But he actually was not finished. Representative Gowdy spoke further, noting that Special Agent Peter Strzok, an ardent anti-Trump person whose bias has now been revealed through the investigation headed by Devon Nunes, was involved in three of the most politically critical investigations in recent times. The FBI, said Rep. Gowdy, has tried to portray itself with an “above the political fray” image, however the recent House investigation revealed a radically different truth.

“So he never should have been on any of these three probes,” the chairman said. “If the animus was enough to kick him up when you found it, the animus should have been enough to kick him off when he said it, which was early in 2016. Completely the wrong person. The FBI’s reputation. Look, there are lots and lots of fantastic FBI agents, 99.9 percent of them. But to pick this person, and not just him, Lisa Page, and other people heretofore not identified FBI agents. Do you remember when Jim Comey, I think you were in the committee when Jim Comey said the FBI didn’t give a hoot about politics.”

“Go read these texts. They gave a lot more than a hoot about who is going to be the Democrat nominee and whether Donald Trump would win,” Gowdy concluded.

Trey is the man for the nation, next round up !

Why is Trey Gowdy leaving Congress? Does anyone know? 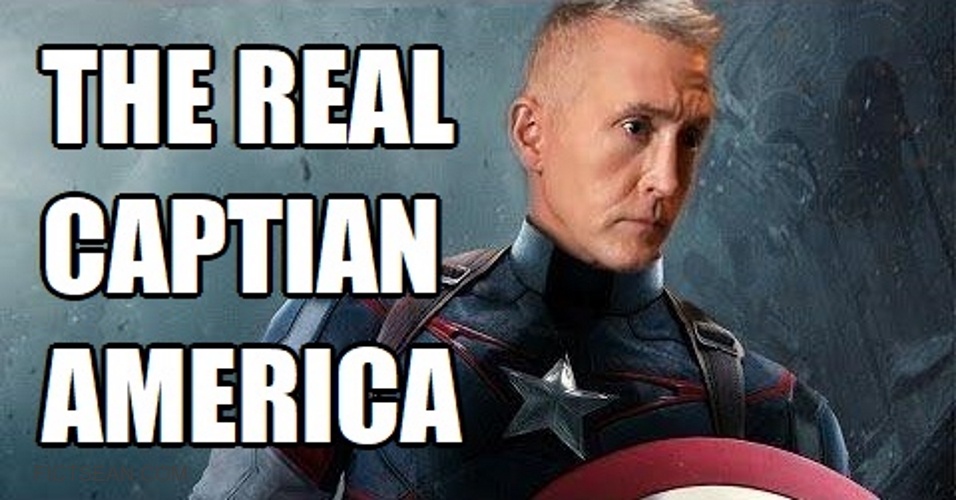 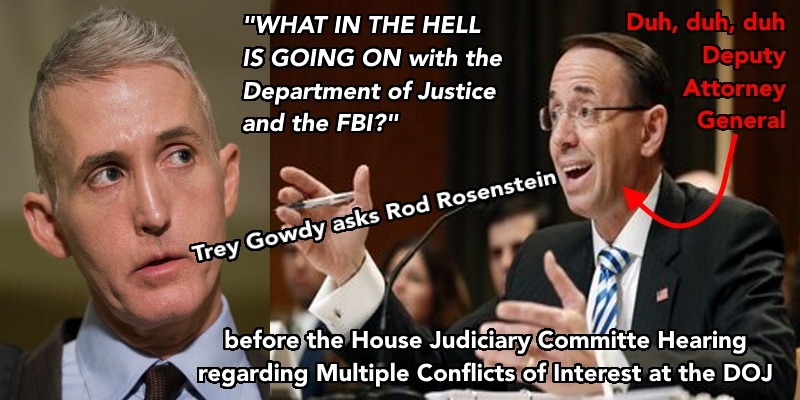 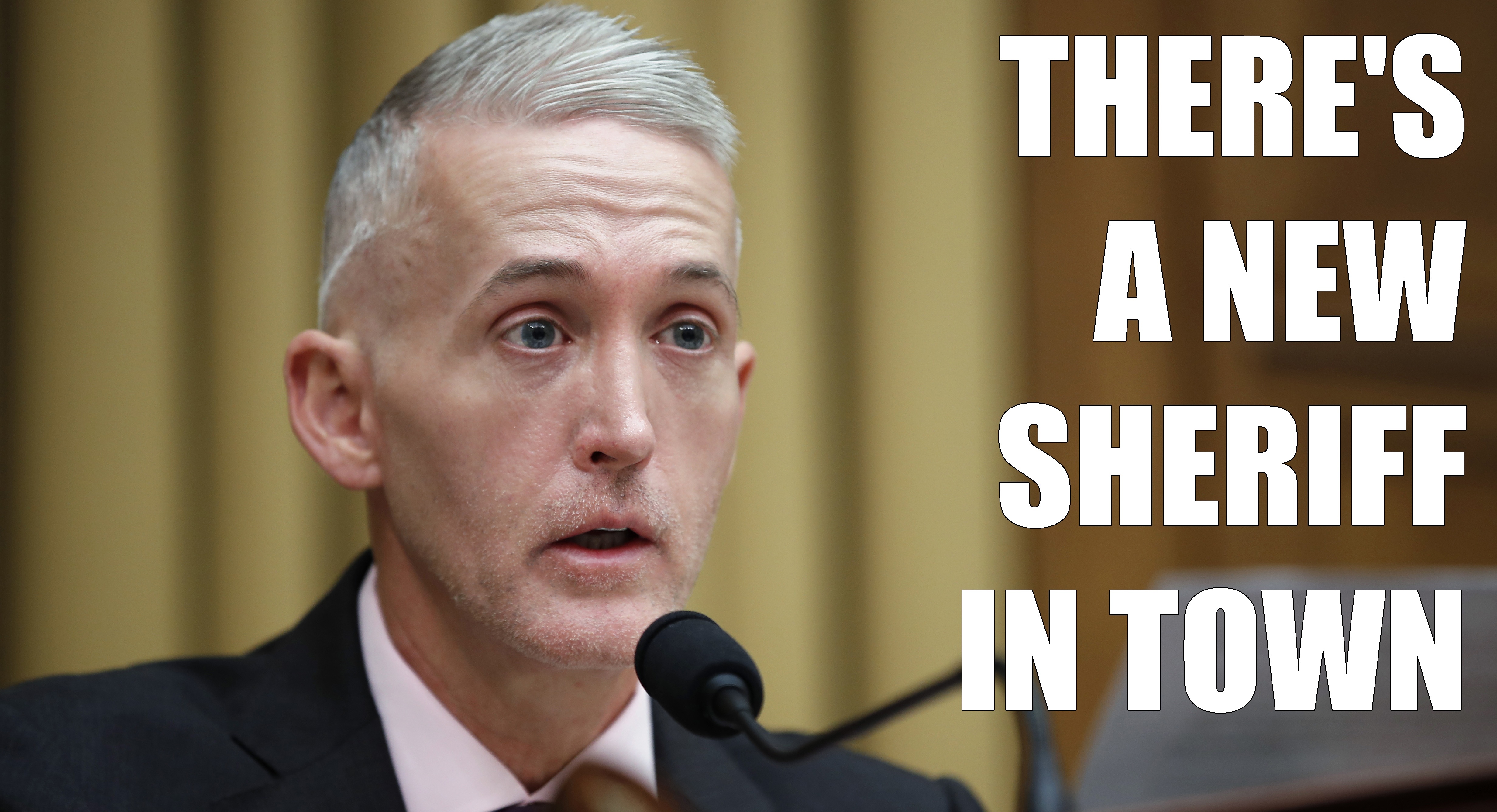