It’s been known for some time that the US Government based its conclusion that Russia hacked the Democratic National Committee (DNC) on a report by cybersecurity firm Crowdstrike, which the DNC paid over a million dollars to conduct forensic analysis and other work on servers they refused to hand over to the FBI.

CrowdStrike’s report made its way into a joint FBI/DHS report on an Russia’s “Grizzly Steppe“, which concluded Russia hacked the DNC’s servers. At the time, Crowdstrike’s claim drew much scrutiny from cybersecurity experts according to former Breitbart reporter Lee Stranahan.

Now, thanks to a new court filing by longtime Trump adviser Roger Stone requesting the full Crowdstrike analysis, we find out that the US government was given a redacted version of the report marked “Draft,” as reported by the Conservative Treehouse.

What makes the whole thing even more hokey is a footnote admitting that “counsel for the DNC and DCCC informed the government that they are the last version of the report produced.” 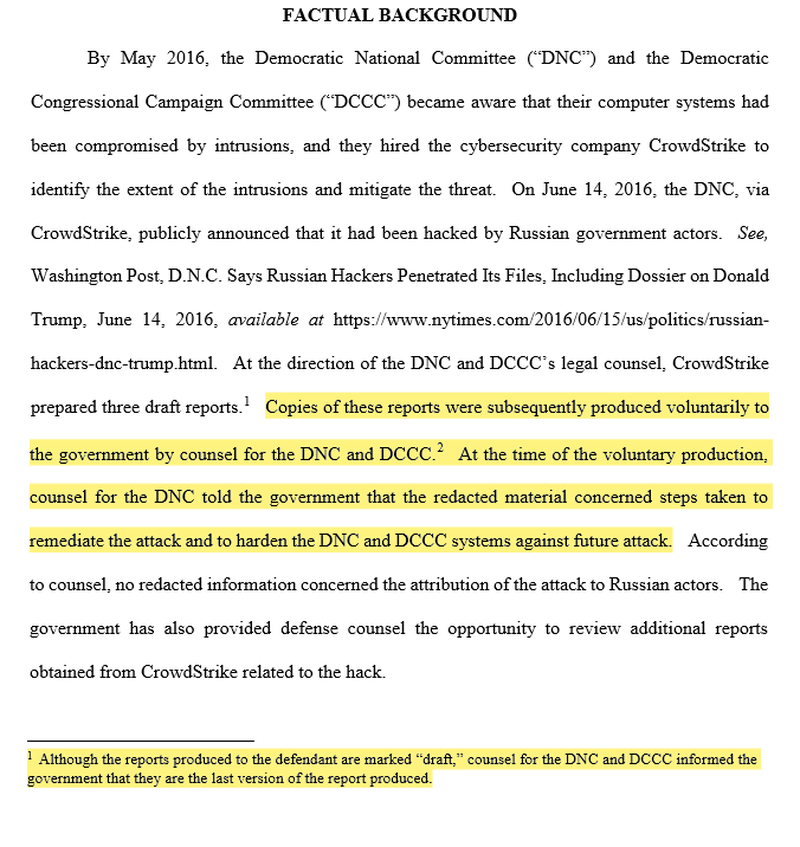 So to be clear – the entire narrative that Russia hacked the DNC is based on a redacted draft of a report which Crowdstrike appears not to have even finalized.

I missed the previous DOJ filing, but this seems significant.

The DOJ informed the court it doesn't have the unredacted Crowdstrike reports. https://t.co/xJHC6ntroc

And as the Conservative Treehouse notes: “This means the FBI and DOJ, and all of the downstream claims by the intelligence apparatus; including the December 2016 Joint Analysis Report and January 2017 Intelligence Community Assessment, all the way to the Weissmann/Mueller report and the continued claims therein; were based on the official intelligence agencies of the U.S. government and the U.S. Department of Justice taking the word of a hired contractor for the Democrat party….. despite their inability to examine the server and/or actually see an unredacted technical forensic report from the investigating contractor.”

The entire apparatus of the U.S. government just took their word for it…

…and used the claim therein as an official position….

…which led to a subsequent government claim, in court, of absolute certainty that Russia hacked the DNC.

Think about that for a few minutes. –Conservative Treehouse

Meanwhile, the Crowdstrike analyst who led forensics on the DNC servers is a former FBI employee who Robert Mueller promoted while head of the agency. It should also be noted that the government of Ukraine admonished Crowdstrike for a report they later retracted and amended, claiming that Russia hacked Ukrainian military.

Ministry of Defence of Ukraine asks journalists to publish only verified information received from the competent official sources. Spreading false information leads to increased social tension in society and undermines public confidence in the Armed Forces of Ukraine. –mil.gov.ua (translated) (1.6.2017)

It doesn’t really matter if they were ‘redacted’ (they claim just to cover additional security measures) or a ‘draft’ … they are fake.

As shown in this article, the entire anti-Russia narrative was built on a lie:

Here are, however, serious repercussions that are a result of this lie; the unintended consequence of poorly executed foreign policy could be the potential end of the U.S. dollar as the world’s currency of choice in international trade as nations around the world attempt to minimize the impact of Washington’s sanctions.

What's in a Name?

Crowdstrike can take a hike. It’s a known generator of political propaganda. Just look at the name. Could they have been any more obvious with their intentions?

As I’ve said before, there needs to be a full independent investigation by government investigators and contracted computer security experts as to everything that was done by everyone involved in the DNC and CrowdStrike, as well as Ukrainian-American DNC contractors and the Ukrainian Embassy, from the time the first alleged intrusions into the DNC servers was done in 2016 up through 2016. That means every phone call, every email, every minutes of meetings, and every bit of forensic evidence from the DNC hard drives, etc. as well as NSA records of all data traffic in and out of the DNC… Read more »