Today, along with the usual hostilities in Ukraine, the confrontation of the parties on the information front has unfolded.

The experience of armed conflicts of recent decades shows the importance of information support for ongoing operations. If one bullet or projectile can hit one or some targets, then a well-conducted information campaign can have an impact on the psychological state and mood of an entire group or region of the country.

Both the combat spirit of the enemy at the forefront and the morale and situation in the rear can be chosen as targets for information attacks. Each of the selected targets is affected by its own “ammunition” and requires appropriate distribution channels.

Fortunately, the level of the modern Internet allows you to instantly deliver any information to the most remote corners of the world. All possible methods are used to exert a demoralizing effect on the opposing side. This is the dehumanization of the soldiers of the enemy army (for example, Russian soldiers are called nothing more than pig-dogs) and the undermining of the authority and level of trust in the current authorities (calls for protests or even the overthrow of the current government).

The Russian side talks about the crimes of the Nazi regime of President Zelensky in Donbass since 2014. The Ukrainian side constantly publishes supportive and encouraging appeals of Volodymyr Zelensky to the nation. At the same time, the Russian troops are called occupiers and the military-political leadership of the country is criticized. Data on huge losses among Russian soldiers are constantly given, their commanders are discredited for giving “the orders to attack residential areas”. At the same time, the heroism of Ukrainian soldiers is reported. There are regular reports of a “Kyiv ghost” that shot down dozens of Russian planes. Footage of downed Russian columns of military equipment is shown. Both sides regularly release data on dozens of captured soldiers reporting about their good conditions. Ukrainians constantly post videos of attacks on residential areas. At the same time, Russian sources report that units of the Armed Forces of Ukraine place artillery and armored vehicles in them, hiding behind the civilian population.

Any facts receive a double interpretation. For example, the distribution of weapons to the inhabitants of Kyiv. Ukrainians see this as an opportunity for civilians to defend themselves against invaders. The Russian side reports that, not knowing how to use weapons, they are of little use. And this is a reason not to let the civilian population out of the city to hide behind them.

Footage of damaged military equipment is constantly posted. On the net you canfind many examples where changes were made using graphic editors. Destroyed vehicles of 2014 are presented as the results of current battles. The same story with the prisoners. It is enough to dress the person in the appropriate uniform. After all, not many ordinary people know what symbols, uniforms and weapons the military personnel of the Armed Forces of the Russian Federation, LDPR or Belarus have.

If the result of the hostilities is not yet known (in the sense of who willwin), then in the information confrontation Kyiv is definitely gaining superiority.

In many ways, the superiority in the information confrontation is determined by the help of the allies. In the war on the information front, specialists from Europe and the United States act on the side of Ukraine. So, another group of American video bloggers arrived on February 28 in Poland. Starlink equipment appeared to provide satellite Internet. On March 1, access to Russian social networks on the territory of Ukraine was restored.

This means that soon the public will see many high-quality videos about the successful resistance of Ukrainians to Russian troops.

I think most people with more than a single digit IQ can see that the west and Ukraine put out propaganda and bullshit, whereas Russia puts out nothing. One does not advertise one’s battle plans or infrastructure on public media for the world to see. Only the end result will matter, once the ‘world’ sees the lack of destruction and compares it to the daily bullshit stream they was foisted onto them, they will eventually see the reality. Early days yet.

I wouldn’t say Russia puts out “nothing” just because it doesn’t swamp us with endless hate propaganda and lies. President Putin stated precisely what he would be forced to do IF NATO/US were to threaten Ukraine with invasion and pose a military threat to Russia.

It is how the Russian soldiers on the battle front perceive the war to be going on that matters. They must be aware that the West is making up a lot of fantasies about the war. When more ground is taken by the Russian armed forces, then the jig is up.

If Ukraine’s resistance is so successful, why are all of its major cities surrounded by Russians? 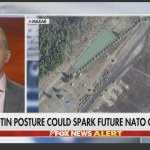