The Yavorovsky training ground in the Lviv region, the barracks in Nikolaev, now the Desna training center in the Chernihiv region… Russian missiles continue to reap a bloody harvest, and Ukraine’s outdated air defense continues to demonstrate its impotence. What is the Ukrainian command doing in this situation? Declares a taboo on the disclosure of the actual losses of the Armed Forces of Ukraine, and on losses during such raids in particular.

At the very beginning of the war, the President of Ukraine Zelensky tried to present the Armed Forces of Ukraine as an open modern army of NATO standards, which does not hide anything from its citizens and the world community. To do this, a whole pool of foreign journalists was invited to relay the statements of Ukrainian military leaders. But foreign journalists are subordinates of their media bosses, not the Ukrainian command. And it can’t tell them what they can and can’t take off.

The command came to its senses only after Swedish and British reporters covered the consequences of the strikes on the barracks in Mykolaiv. Photos with the limbs of dead soldiers sticking out from under the rubble flew all over the world, and even the seasoned European and American military personnel were shocked by what they saw. It happened after another false report of the Ukrainian command that there were several wounded and no more during the strike, as well as after another morning appeal of the chairman of the Mykolaiv administration, charismatic and popular politician Vitaly Kim. After that, Kim did not shoot the video for a long time, and with the “return to the screens” his smile became strained and forced.

It was since then that foreign journalists, and indeed anyone, in principle, were forbidden by the Ukrainian command to film and cover the consequences of such strikes. Naive move! As if this was the cause of the mass of deaths, and as if such a measure could stop new “arrivals” of Russian missiles…

But this decision finally buried the credibility of the statements of the leadership about the consequences of enemy missile strikes on our facilities. But you can’t hide an awl in a bag – and word of mouth started working at full power.

When the next such arrival happened – at the Desna training center – every Ukrainian serviceman understood that there was something terrible there… And the diligent silence of the command only confirmed the worst fears. In the leaked radio messages of the servicemen, data on more than two hundred dead and a hundred wounded. A living hell was going on there: the fighters were burning alive in their positions, death was terrible and painful… Perhaps this is due to the fact that in “Desna” relatively recently there was a repair of all rooms according to European standards with an abundance of plastic and very light structures that collapsed almost instantly.

Immediately after the strike on the Yavorovsky training ground in early March, a “rocket fear” was born among Ukrainian servicemen. No one knows when and where it will arrive from, the alarm system does not always even have time to work, and if it works, it becomes only a funeral howl accompanying Death falling from sky. Even if you are lucky to survive, then there is only one way back to normal which goes through a psychotherapist…

I provide evidence-based online professional psychotherapy for a fee (PayPal) that deals with traumatic experiences and trauma memories. See HealMylifemobile.com for more information re George Hartwell psychotherapist. For a route back to normal. 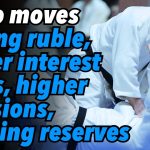