What do you get when the loveliest woman in Hawaii meets the bravest man on television; would you believe treason? Rational people wouldn’t, but that was the allegation from The View when Tulsi Gabbard appeared not for the first time on the Tucker Carlson programme.

If Whoopi Goldberg and her fellow birdbrains can be forgiven on account of their single digit IQs, the same cannot be said for Mitt Romney, who accused Tulsi of spreading treasonous lies.

Treasonous lies like the United States has biolabs in Ukraine? Here is a State Department document from 2005 which discusses these imaginary biolabs. This begs the question, why locate them in Ukraine? That is clearly a rhetorical question.

The world is currently a more dangerous place than it has been for a long time; Europe hasn’t been this dangerous since the Bosnian tragedy or even the Second World War. Serving soldier Tulsi Gabbard is clearly as concerned with that situation as anybody else and a lot more concerned than many. How can it be treasonous to speak out against this?

If you want to understand just how catastrophic the outcome of a disaster with these biolabs could be, don’t look at the coronavirus pandemic, look at Gruinard, a small island off the coast of Scotland where anthrax was tested in 1942. Compared with some of the pathogens developed since, anthrax is a relatively mild disease, yet Gruinard is uninhabitable to this day. Now project that onto Eastern Europe or further afield.

If like Tulsi and Tucker you want to stop this madness, consider joining or at least supporting the Stop The War Coalition. These people might be leftists, but unlike Mitt Romney and the denizens of The View, they are not insane. 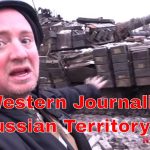