This video places great focus on the situation in Syria, including, remarkably, Mr. Carlson’s assertion that the allegation that Bashar al-Assad used chemical weapons in his own country was false (in 2018 and 2017 this was the hot American media narrative). Tucker Carlson makes the same case Rush Limbaugh and I made a few days ago: President Trump is probably the most anti-war president in US history. He is bringing troops home from many places, like Germany, and especially, the Middle East.

(Perhaps that is part of why the US President just got nominated for the Nobel Peace Prize. Unlike Obama, President Trump actually did work to earn this nomination. Let’s see if he gets it. I doubt he will.)

As Tucker tells the story of the US military-industrial complex, we hear a tale of what amounts to a deadly form of incest. It is no wonder that America is roundly criticized in some parts of the world for the deaths of millions of innocent people and for no good reason.

The defense establishment ought to be grateful to the President. While he has ridiculed needless wars around the world from the point of view of sacrificing American soldiers’ lives for useless and unimportant causes, the President also provided some significant shade for the vast populations those soldiers killed in the line of duty.

Perhaps it is partly for the reason that our great military personnel were sent on needless killing missions disguised as “war to protect American security and the American way of life”, that many of the returned veterans have significant PTSD, resulting in tragedies like suicide, drug use, murder… what it this were because the soldiers were sent to kill without reason? What if they are haunted by the reality of what they did while carrying out orders in good faith, orders that turned out to have no reasonable or rational basis for existing in the first place.

President Trump has not called that out, and that is probably very wise. The establishment ought to be grateful for that.

How refreshing to hear some truth for a change. Bring the troops home? No escalation? No more wars for no reason other than supporting weapons manufacturing in the US? No more US citizens volunteering to die overseas in places they’ve never before heard of, or be on maimed row at home for the rest of their lives?

Well, no wonder all the so-called Democrats attacks on Trump. 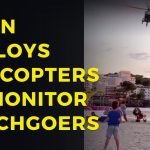 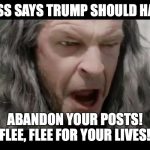