For more than three years I’ve tried to explain that President Trump’s foreign policy was having the exact opposite effect of its intended purpose.

Trump, under the advice of people like John Bolton, Secretary of State Mike Pompeo, Israeli Prime Minister Benjamin Netanyahu and Saudi Crown Prince Mohammed bin Salman (MBS) has pursued a maximum pressure campaign against Iran in the hopes of the regime either crumbling or suing for peace.

Trump was warned by both Chinese Premier Xi Jinping and Russian President Vladimir Putin that Iran would ‘rather eat dirt’ than submit to him on nuclear weapons, support for Hezbollah, Iraq and President Bashar al-Assad in Syria.

In effect, Trump and Pompeo have argued for Iran to give up its sovereignty to appease the fears of Netanyahu in Israel, and they have steadfastly told Bibi and The Donald to go pound sand.

Every six months or so, depending on the state of domestic affairs, tensions with Iran ratchet up another notch. Over the past couple of weeks a series of explosions at key Iranian military facilities occurred with fingerprints of Israel striking deep into Iran to cripple strategic targets.

Trump, distracted by the domestic insurrection against him, has left foreign policy strictly to Pompeo who is avidly pursuing a ‘have his cake and eat it too moment,’ trying to extend the weapons embargo against Iran at the United Nations while still claiming the unilateral right to leave the JCPOA without further consequences.

In a word, Russia, China and Europe are telling him, “No.”

And now we know why. China and Iran just inked a 25-year, game-changing strategic deal covering everything from oil sales, contract bids and massive upgrades to Iran’s anti-air capabilities as well as its domestic air force.

This deal was in the air over the weekend when Iranian Foriegn Minister Javad Zarif briefed Iranian lawmakers on the pending deal.

From Simon Watkins at Oilprice.com via Zerohedge who is arguing the deal was actually inked last year:

One of the secret elements of the deal signed last year is that China will invest US$280 billion in developing Iran’s oil, gas, and petrochemicals sectors. This amount will be front-loaded into the first five-year period of the new 25-year deal, and the understanding is that further amounts will be available in each subsequent five year period, provided that both parties agree. There will be another US$120 billion of investment, which again can be front-loaded into the first five-year period, for upgrading Iran’s transport and manufacturing infrastructure, and again subject to increase in each subsequent period should both parties agree. In exchange for this, to begin with, Chinese companies will be given the first option to bid on any new – or stalled or uncompleted – oil, gas, and petrochemicals projects in Iran. China will also be able to buy any and all oil, gas, and petchems products at a minimum guaranteed discount of 12 per cent to the six-month rolling mean average price of comparable benchmark products, plus another 6 to 8 per cent of that metric for risk-adjusted compensation. Additionally, China will be granted the right to delay payment for up to two years and, significantly, it will be able to pay in soft currencies that it has accrued from doing business in Africa and the Former Soviet Union states.

You can almost hear MBS’ sobs from here. Because there is no way the Saudis can compete with this. This is a strategic move by Iran to ensure that

This also dovetails with China’s eschewing Saudi oil for Russian Urals grade. At the same time China is working on putting a buyer’s group together to further marginalize Saudi oil pricing policy of setting tenders on a monthly basis.

Moreover, China wants its oil futures contract in Shanghai more dominant in the global market. That contract is a key piece to deepening Yuan liquidity.

Shifting the oil trade where it can trade in real time versus would be a boon to the market. Most of the Arab states set their tender prices at the beginning of the month and they don’t change.

Now let’s tie this into what’s happening in Hong Kong, where President Trump is threatening the Hong Kong Dollar’s peg to the U.S. dollar to try and cause China economic pain.

But China wants this to happen. It obviously doesn’t want Hong Kong to continue being the source of China’s international liquidity which is also retarding the internationalization of the yuan as a trade settlement currency.

Here are some recent comments about China from an interview with Secretary of State Mike Pompeo:

30 years of feeling the invincible hegemon doesn’t disappear overnight or go down without a fight.

Moral of the story, never create a democracy that allows a General like George Washington to commit a genocide on natives so that he can make a killing speculating in real estate, or allows a bankruptcy con man like Trump to start race riots with the black and Latino community so that he can feed red meat to his bigoted white base.

Trump’s character dictates an inclination to pick fights. It further dictates that he’s convinced he’ll prevail in all, or just most of those fights and that he can walk away from those he loses with minimum damage by virtue of buck-passing. It’s his record in his real estate career and it’s his record in foreign dealings. Problem is, they’re apples and oranges. I won’t even speculate how a Biden would surely make an unpalatable fruit salad out of the aftermath.

America is Nazi Germany On Steroids. For the past 70 years, it has rampaged across the planet, slaughtering, butchering, starving and immiserating hundreds of millions of people. This is evil beyond compare in all of human history. It actually makes Adolf Hitler or Genghis Khan appear quite sane and moderate by comparison. Most of the world is now subject to US economic terrorism. Even its most grovelling, obsequious satellites like Canada, France, Germany, Japan, South Korea. Now America’s yapping little poodle Britain bans Huawei right on cue after the Iran deal. It is currently trying to starve millions more in… Read more »

Excellent Paul, that karma can’t come around soon enough! The vast majority of US citizens don’t care what their government is doing to others in the world or are just plain too stupid to know. In either case they’re gonna reap what their psychopathic government has sown.

Soon all mankind with reap the whirlwind of another world war.
https://www.ghostsofhistory.wordpress.com/ 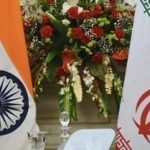