Nancy Pelosi is 78 years old. She is the Democrat Party leader of the House of Representatives, and presently she is Speaker of the House since her party holds the majority of seats there. She is also grounded, like a naughty teenager.

Like a naughty, gossipy teenager, she is bitterly embroiled in a popularity war against another septuagenarian, US President Donald Trump (age 72).

One has to admit that there is a great deal of humor that can be extracted from this. After all, we are taught as kid to “behave like adults.” No doubt The Donald and Mrs. Pelosi were taught this too, probably even more strongly than those of us who are younger.

However, the American media is eager mostly to brand this as a “temper tantrum” of the President, because most of the American media, for some reason, just doesn’t like Mr. Trump. We have noted before here on The Duran the thought experiment surrounding Mr. Trump: “what if he had run as a Democrat, but with the exact same policy set as he has now?”

It is really too bad that it is not possible to see what would happen, but a thinking person can use this thought experiment to discover that most of the sentiment against Mr. Trump is simply because he ran as a Republican.

At any rate, we have a situation where it is being reported by a one-sided media that President Trump is at fault and is being somehow unfair and mean to Mrs. Pelosi. Mrs. Pelosi evidently thinks so too, for after Mr. Trump yanked her travel privileges via taxpayer-paid military transportation, she shot back, claiming that it was in fact President Trump who blew the security for the troops and personnel on this planned trip by announcing a secret trip publicly. CNN reports:

Speaker Nancy Pelosi canceled a planned trip to visit troops in Afghanistan Friday, after — her office alleged in a statement — the White House leaked the details of the congressional delegation’s commercial plane travel.

In the middle of the night, the State Department’s Diplomatic Security Service provided an updated threat assessment detailing that the President announcing this sensitive travel had significantly increased the danger to the delegation and to the troops, security, and other officials supporting the trip,” Pelosi spokesman Drew Hammill said. “This morning, we learned that the administration had leaked the commercial travel plans as well.”

Which, to borrow the parlance of the Internet, is VERY big, if true.

It’s one thing for Trump, as he did on Thursday, to rescind the military plane Pelosi and the rest of her colleagues were planning to fly on as a way of exacting revenge on her for asking the President to delay his planned “State of the Union” speech on January 29. To do so publicly — White House press secretary Sarah Sanders tweeted out the letter Trump sent to Pelosi — is to raise the stakes. To leak commercial travel plans to make absolutely certain that Pelosi can’t go on the trip is a bridge even further.

Now, to be clear, this is an allegation made by Pelosi without corroboration to date. And, the White House denies it. “When the Speaker of the House and about 20 others from Capitol Hill decide to book their own commercial flights to Afghanistan, the world is going to find out,” a White House official told CNN’s Sarah Westwood and Kevin Liptak. “The idea we would leak anything that would put the safety and security of any American at risk is a flat out lie.”

It appears that Mrs Pelosi is copying The New York Times and The Washington Post narrative style of “slander the President, acknowledge somewhere buried in the article that the slanderous charge is unsubstantiated, but get that slander out there so people hear it and read it!”

It is a shoddy attempt for the news media to manipulate its consumers all while “protecting itself” from libel.

The unfortunate fact is that it does work, at least insofar as to galvanize the anti-Trump crowd into a very solid bloc of insanely angry Americans. Further, in using the classic style in which a drug addict or active alcoholic manipulates people to pity him or her, Mrs. Pelosi and the media act like the druggie teenagers arrayed as one against Dear old Dad, who is the only adult in the house.

The White House. But, still.

To put a bit of adult analysis on this story is very simple, but it is honestly not very thrilling. To be honest, it is probably more fun to be like the mainstream media and the Democrats – energized by passion, doing stupid things publicly and getting attention and praise for it.

But here is what appears to be the hard cold boring reality behind this saga.

President Trump is committed to getting a change made in how the United States handles illegal immigration. For decades, the country has been getting slowly infiltrated, if not invaded, by immigrants who at the very least game the welfare and social support mechanisms of various levels of US federal, state and local governments. When people come into the country illegally and go on welfare, taxpayers start paying non-citizens for being here. Taking care of even 100,000 illegal immigrants with such programs is likely to be extremely expensive. Housing, food, healthcare, schooling, legal protection by police… it goes on and on.

But there are not just 100,000 such people here. Last year, the Border Patrol apprehended well over four times that number. 467,000 illegals were apprehended in 2018. Estimates show anywhere from 12 million to 22 million illegals presently living in the United States. While it is certainly doubtful that all of them are gaming the welfare system, they are in the country, unknown, untracked, and not being good citizens by paying taxes and supporting our agreed-upon infrastructure and services the same way that American citizens are.

That is a huge money drain.

Add to that the drugs that do flow across the Mexican border, a fair infusion of criminals like murderers and rapists, and the possibility of terrorists making use of the open border to infiltrate the US and the situation becomes both costly and dangerous.

This is why President Trump wants to change it with a barrier running the length of the US-Mexico border.

While it is unlikely that all 2,000 miles need to have a wall, we certainly need more of a barrier than what we have now, and the barriers that DO exist are extremely successful in cutting the flow of illegals. From the high point of 2000, immigration apprehensions have on the whole fallen by quite a bit. This chart shows the track through 2016. 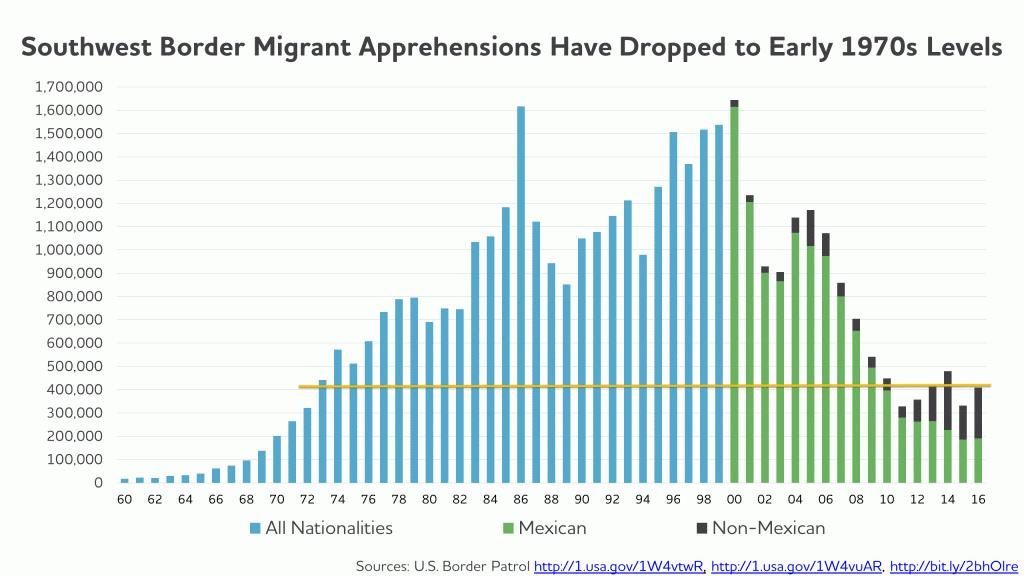 But our 467,000 apprehensions is an enormous number – larger than the population of the city of Long Beach, California!

This is an enormous number, but it is far lower than the 1.6 million that got caught before the existing barriers were built. This is also the number of illegals that were caught. We do not know how many were not caught.

Now, President Trump begins to look like the adult in the room, because he wants to fix this, bringing the numbers down much closer to zero, and also finding a way to vet and interview immigrants that truly can contribute to the US dream as Americans. So, as part of creating a real border security apparatus, he wants to extend and even complete the Border Wall. It is not very expensive – even a $50 billion price tag is only about 1.3% of the bloated federal budget this year, and President Trump thinks the wall can be finished with half that amount. At this time, he is only asking for about $5 bn.

And all Nancy Pelosi will say is “no!” So, like a good parent, the President refuses to reward such behavior by giving her what she wants. Now there is a partial government shutdown. President Trump took it on himself, but he is correct. He is doing this because the Democrats are doing this childish druggie routine. And he cannot reward this behavior.

Pelosi and her loyal sidekick Senator Charles Schumer are like a clique of druggie kids in the class, disrupting everything by commanding some attention. But it seems they are gradually losing it, and the government remains shut down. However, they wanted to act like it is Trump’s fault, so Nancy Pelosi was trying to do “business as usual” and go to Afghanistan for whatever reason (do they want her?).

And the President said, “hey, not so fast. You have a partially closed government, and I have been here every day waiting for you to negotiate a deal. You have to be nuts to think this shutdown is not going to affect you, so you cannot use our military transportation while the government is shut down. It is only fair.”

For some people who read articles like this, the answer will probably still be “President Trump.”

But maybe if they put down the cannabis and the booze and read facts for a change, their heads will clear up and they will come to see what the rest of properly thinking people have already seen.

In this feud, there is an adult in the room. And he is having to manage the childish behavior of a woman six years older than he is.

So what! Who cares about Pelosi grounded or not? This is a no-news item.

More news about Russia, please.
That Pelosi-stuff is being published zillions of times in all of the US media. Everybody can read it to the fullest there …

This is hilarious.
Pelosi and friends all set for a 7 day jolly, bags packed and on the way to the airport.
Just to be told to go home as the freebie trip is canceled.

Yes! And furthermore, Pelosi should be enclosed in the shutdown and receive no pay for her utter stupidity. This is a waste of tax payers’ money.

Did Pelosi finance her hoola-hooping Hawaiian holiday fom her Government pay? She should get a paycut immediately. Incredible! She was hoola-hooping in Hawaii instead of doing her work in Congress!

You should realise that ‘Only little people’ should pay for holidays etc.

Pelosi, Schumer and Waters are just three in Congress who should really be in a retirement home 🙂