The Trump administration is once against throwing its weight around, making threats, and offering to disrupt international relations. Washington’s officials are on a tour to inform world leaders that they will not be spared secondary sanctions from the United States should they not have closed out their oil imports from Iran by the end of a November 4th deadline, and not even allies are being prepared an exemption to the rule.

WASHINGTON – The United States is pushing foreign countries to cut their oil imports from Iran to zero by November, a senior State Department official said Tuesday, as the Trump administration escalates its bid to pressure Iran after pulling out of the nuclear deal.

The price of U.S. crude jumped to more than $70 per barrel for the first time since May on the news that countries were expected to completely eliminate their imports, rather than making a “significant” reduction. The Trump administration does not intend to give out waivers allowing countries such as close allies to keep importing, the official said.

The official wasn’t authorized to be identified by name and briefed reporters on condition of anonymity.

Last month, President Donald Trump announced the U.S. was leaving the 2015 deal, in which sanctions on Iran — including its energy sector — were eased in exchange for Tehran agreeing to roll back its nuclear program. His administration said the oil sanctions would be going back into effect after a six-month grace period that expires Nov. 4.

At the time, the Treasury Department had issued public guidance suggesting that countries needed to make a “significant reduction” in their imports, or else they would be subject to separate U.S. sanctions prohibiting all transactions between their central banks and Iran’s central bank.

But the official said that Trump administration officials have been visiting European and Asian countries to say that the U.S. expects their imports to be zeroed out by the time the grace period ends.

The official also said the U.S. is working with other Middle East countries to increase production so the global oil supply isn’t harmed.

Some close U.S. allies are among the largest imports of Iranian crude oil, including India and South Korea. Japan and Turkey also import significant amounts of Iranian oil, according to statistics from the U.S. Energy Information Agency. The biggest importer of Iranian oil last year was China, which has remained a party to the Iran nuclear deal despite the U.S. withdrawal.

This news is straight from the horse’s mouth and informs America’s allies that various positive aspects of having a relationship with America can and will be flushed if and when it suits Washington and its foreign policy interests. If Trump wants to economically isolate Iran, and your country is bucking that process, you can expect to be dealt with accordingly, with any and all measures being on the table. International agreements and relationships are only honored as long as they are useful to America’s immediate strategic interests, meaning that whatever relations have been in the past, or how good those relations may be at the present time, during the Trump administration, it is always in review against present policy goals.

It is time for the “rest of the world” to SANCTION THE US! 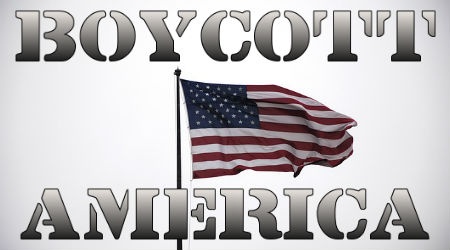 And what a ‘grace’ it will be the day the American ’empire’ finally crashes.

Russia is planning to do an energy deal with the US where they will invest in Russia. Thought Russia had pride and integrity, shunning the US would have been expected.

The title of the article needs correction. it should read:

“Trump admin threatens to sanction any country buying Iranian oil after close of grace period, no exceptions made for allies vassals”

I’ll bet every nation on the planet now is making moves away from ever using the dollar again for anything, seeing that the USA will defeat them with an implanted USA fascist, and then just plain take it all. They’ve done this to many nations by now, including the USA’s destruction of Kenya once they got their oil. The faster the dollar usage is minimized with the institution of new banking arrangements, then discarded totally, the sooner the USA dies, the sooner the better.

This is how you push people away from the US dollar, you threaten them for trying to do what’s best for their own nations. Many have wised up and have watched the US’s faltering military adventures, they will walk right over to Russia or China for their next partnership when it becomes too complicated, or too unpredictable to partner with the US.