This article was first published by The Duran

One of the most interesting revelations from President Assad’s visit last week to Russia’s Khmeimim air base in Syria is that the Russians have deployed one of their most unusual weapons systems there: the BMPT-72 Terminator. 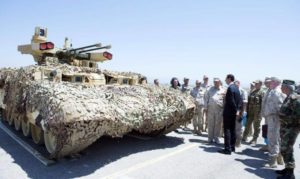 The BMPT-72 has its origins in the two Chechen wars, when the Russians decided that a heavily armed armoured vehicle was needed to support main battle tanks in dealing with infantry especially in built up areas.

For some time it was recognised that armoured vehicles equipped with rapid fire anti aircraft cannon were devastatingly effective when used against infantry and in built up areas.  One of the systems regularly used for this purpose is the famous ZSU-23-4 Shilka 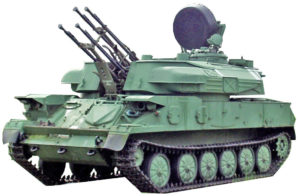 The problem with using the ZSU-23-4 Shilka for this role is that its armour is thin, which makes it unsuitable for first line combat.  In the early 2000s the Russians accordingly designed the Terminator, which was actually based on a T72 tank chassis, and was therefore better suited for this role.

The latest version of the Terminator – the BMPT-72 – packs a formidable punch, with two high velocity rapid fire 30 mm anti aircraft cannons and four Ataka anti-tank missiles, which can also be used to attack buildings, especially when equipped with thermobaric warheads.

Development of the Terminator has however been controversial in Russia, and they do not appear to have been procured in any quantity.  It seems that someone has now decided that the time has come to test out the concept – and the machine itself – in combat, which is presumably why it is now being deployed to Syria.

The number of Terminators Russia has sent to Syria is unknown.  Al-Masdar, which has sources within the Syrian military, describes how and where they will be used

The Russian Terminator-2 BMPT vehicle which hasn’t entered service in any armed forces in the world was spotted in the eastern countryside of Hama alongside the elite Desert Hawks who are wrapping up their preparations for an offensive aimed at expelling ISIS from the central province.

The vehicle was first seen in Hmeimim Airbase during President Assad’s visit the previous week. According to reports, the Terminator-2 war machine will participate in the fierce battles of Hama’s rugged mountainous terrain and will be operated by Russian service members until Syrian Army units receive adequate training on the weapon system.

The SAA offensive in eastern Hama will be focused on securing the oil pipelines and capturing the ISIL stronghold of Uqayribat. Once captured, ISIS fighters in the area will likely flush out of the province and the adjacent territory north of Palmyra to avoid full encirclement.

Filled with mines, ambushes, fortified encampments, and unmaneuverable geography, the battle for east Hama is far from easy and the terror group is almost certainly unwilling to bulge given the strategic weight of region. Should the Syrian Armed Forces rid the area of ISIL presence, the path to Deir Ezzor and the rest of eastern Syria will be much less dangerous and more militarily feasible as ISIS’s mobility in the desert and its ability to conduct its infamous well-planned desert raids will be permanently paralyzed.

Eastern Hama is the gateway to the oil-rich Euphrates basin.

How ISIS reacts to a weapons system the like of which they have never come up against before, and how well the Terminator performs in combat, remains to be seen.   Everything however suggests that it will prove a terrifyingly effective weapon.

One respect in which the Terminator may prove particularly useful is in dealing with ISIS’s single most powerful weapon: the vehicle driven suicide bomb.  When used successfully these can be devastating weapons, spearheading ISIS offensives and used with deadly effectiveness by ISIS when it is thrown onto the defensive.

Suicide bombs must however by definition use un-armoured or very thinly armoured commercial vehicles to be truly effective, since enclosing the bomb in an armoured body obviously reduces its effectiveness.  That makes vehicle driven suicide bombs theoretically vulnerable to destruction by long range fire, and that in fact is how the Syrian and Iraqi military try to counter them.  Here is a video of such a vehicle driven suicide bomb being destroyed in exactly that way by pro-government Shiite militia in Iraq.

However the speed at which these bombs can move makes them a potentially difficult target, and there have been any number of cases when they have evaded attempts to destroy them, and have got through and have destroyed their targets.

Heavily armoured vehicles equipped with high velocity rapid fire cannons and very advanced fire control systems like the Terminator are just about the most effective conceivable way to deal with them.

Since ISIS as it fights for its life is likely to stage suicide bomb attacks with increasing frequency, someone in Moscow has obviously decided that sending the Terminator to Syria to deal with them has now now become urgent.

That shows both the typically thorough planning of the Russian General Staff – preparing carefully in advance for a likely wave of suicide bomb attacks which has not yet happened – whilst paradoxically providing further proof – since the Russians obviously expect a drastic increase in suicide bomb attacks over the next few weeks – that ISIS’s days in Syria are numbered.