While their testimony was unable to prove a quid pro quo or machiavellian Trump bribery, it did reveal the extent to which the Democrat party and the Deep State are in panic mode, as Obama White House corruption investigations into loans provided to Ukraine ramp up, and Ukraine election meddling in 2016 have now taken center stage.

The impeachment circus remains in full swing on Capitol Hill, with the Democrats’ latest star witness apparently overhearing an incriminating phone call and raging at Trump daring to set his own foreign policy agenda.

David Holmes, a low-level staffer at the US embassy in Kiev, appeared on Capitol Hill for questioning on Thursday. Holmes provided no direct evidence of a ‘quid-pro-quo’ arrangement between President Donald Trump and Ukrainian President Volodymyr Zelensky, but told lawmakers that he managed to overhear Trump demand “investigations” into Joe Biden while in a restaurant in Kiev.

Holmes claimed that on July 26, he overheard an enraged Trump shout down the phone to US Ambassador to the EU Gordon Sondland, demanding that Zelensky investigate the Biden family’s business dealings in Ukraine. Though the call took place at an open-air cafe in the busy city, Holmes claimed he could hear Trump perfectly well on the speaker of Sondland’s cell phone, and that afterwards, Sondland told him that Trump had specifically asked him to investigate the Bidens.

Holmes admitted that he didn’t take notes on the call, however.

The only problem with Holmes’ testimony is that Sondland denied on Wednesday that Trump had ever mentioned the Bidens. Sondland also testified that Trump told him he “wanted nothing” from Zelensky, specifically “no quid pro quo.”

Democrats, like House Intelligence Committee chairman Adam Schiff (D-California), claim that Trump withheld military aid to Ukraine in exchange for Kiev reopening an investigation into Joe Biden’s son, Hunter, who was on the board of Burisma, a notoriously corrupt gas company.

Ensconced in the White House, Trump live-tweeted throughout Holmes’ testimony, blasting the former staffer for his apparent superhuman sense of hearing.

“I have been watching people making phone calls my entire life,” he tweeted. “My hearing is, and has been, great. Never have I been watching a person making a call, which was not on speakerphone, and been able to hear or understand a conversation. I’ve even tried, but to no avail. Try it live!”

I have been watching people making phone calls my entire life. My hearing is, and has been, great. Never have I been watching a person making a call, which was not on speakerphone, and been able to hear or understand a conversation. I’ve even tried, but to no avail. Try it live!

Asked whether Trump froze the aid package in exchange for the investigation, Holmes simply told Congress that he had the “clear impression” this was “likely.” The Ukrainians, he said, would have put two and two together and assumed the hold-up had something to do with the investigation.

Impressions, assumptions, and overheard phone calls are unlikely to provide solid evidence of the “high crimes and misdemeanors” necessary to impeach a president, however. In the absence of any smoking-gun proof, Schiff has been left to compile testimony from bureaucrats and functionaries who heard second- and third-hand accounts of a now-infamous phone call between Trump and Zelensky, which in itself did not reveal any quid-pro-quo deal between the two leaders.

One thing the witnesses have been united on is their distaste for Trump’s foreign policy decision-making, and belief that they should be running the show instead. On Thursday, Holmes echoed the complaints raised by Lt. Col. Alexander Vindman earlier in the week, telling lawmakers he was “deeply disappointed to see the President raised none of what I understood to be our inter-agency agreed-upon foreign policy priorities in Ukraine” with Zelensky.

The phrase "official US foreign policy" keeps getting repeated over and over. Where is this "official" policy housed, exactly? In some kind of sacred chamber? I always thought democratically-elected leaders were the ones who crafted the policy

Also before the committee on Thursday was Fiona Hill, a British-born ‘Russia expert’ at the National Security Council. Hill reasserted the theory that Russia meddled in the 2016 election and accused Republicans of promoting “politically driven falsehoods that so clearly advance Russian interests.”

Hill has a long history of crying wolf when it comes to Moscow: she penned a critical biography of Russian President Vladimir Putin in 2012, and once worked with former British spy Christopher Steele, whose dossier of unproven and scandalous allegations against Trump helped kickstart the FBI’s ‘Russiagate’ investigation.

Though Schiff’s committee can call more witnesses, Holmes and Hill most likely represent the last chance for Democrats to milk enough information to bolster their case against Trump. After this, it will be the turn of Jerry Nadler (D-New York) and his House Judiciary Committee to decide whether to draft articles of impeachment based on Schiff’s findings.

Those chosen people like to gang up and show their evil side.

This is stupid. Everybody is making assumptions here. The democrats have completely lost their minds. And if Trump thinks that a trial in the Senate is a good idea, then he’s stupid too. When would this “happy event” take place? Is this good for the US? The US populace and the rest of the world will look on this in disbelief. This goes far past a laughing stock. And really, how many minds are going to be convinced by this utter clusterf*ck? And, mark my words, if there is a Senate trial it will likely be in the midst of… Read more »

Helen B
Reply to  Marcus

Best to burn down the corruption, and then, and only then, can you rebuild a nation that is run for its citizenry and not the Greedy Pigs.

What you feel is what many of us feel and I’m not even from the US .Why people like Shifty insist on making the dems all look like fools , I can’t gather a guess .Not a Trump fan either but good God can these people get a grip already .

Zombies R US
Reply to  Guy

Yeah, well just give thanks you don’t have to put up with this crap first hand. It’s giving me existential vertigo.

What makes them act this way HAS been identified…It is a SERIOUS mental malady that has been labelled “Trump Derangement Syndrome”…and appears to be spreading unchecked among the “left of centre”, progressive, liberal democrats and rinos…

It’s all Putin’s plan to make the US into a laughing stock. Check Fiona for offshore bank accounts.

How about if you just post the links or is that worn out song of Putin’s and his billions that he’s stole from Russia yet no one not even the C.I.A can locate wheres stashed all the loot.!!

Aren’t these people just as much out of line as prima donna Doug was vis-à-vis HST?

Bring on the Senate trial. They’ve all had their snouts in the Ukraine trough, and the banksters are about to strip it of its land assets … this much evil cannot be allowed to continue.
Ukraine’s only hope is to ally with Russia before they lose everything … if Russia will have it.

Finally, Trump does something intelligent, investigating Dirty Joe. Give that man a high five.

The deep state would have to be the root cause for why Empire USA is so belligerent, deadly and expansion crazy.
For the greater your education and wealth, the greater your pride and desire to be enriched upon the misery of those who have less education, less wealth or less whiteness of skin.

The Obama-Biden Democrat Administration spent $5 billion to install a fascist coup regime in Ukraine. And so, as a smokescreen to hide such corruption, and to prevent Congress from passing any laws that benefit the working-class, Trump faces impeachment. And also, to cripple Bernie Sanders and Elizabeth Warren in their effort to win the White House.

When I joined the Vietnam War, rehashing the misery of a society-wide problem and ten cents could buy you a cup of coffee. But, neither love nor money could gain you an understanding of the root cause, and so it is today, for as this video just established, no one in the news business dares address the root cause of anything, Truth is, an old wisdom calls out: “The curse without a cause has not come.” For if we do not enlighten the public as to the cause of a problem and get a majority to agree on the root… Read more » 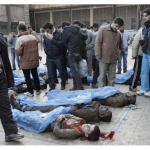