Last week, the number of COVID-19 cases in Moscow took a sudden and radical jump. While the numbers seemed to stabilize during the week, it was too soon to tell, as Thursday’s report showed the highest number of new cases identified in one day in Moscow since the beginning of the pandemic. 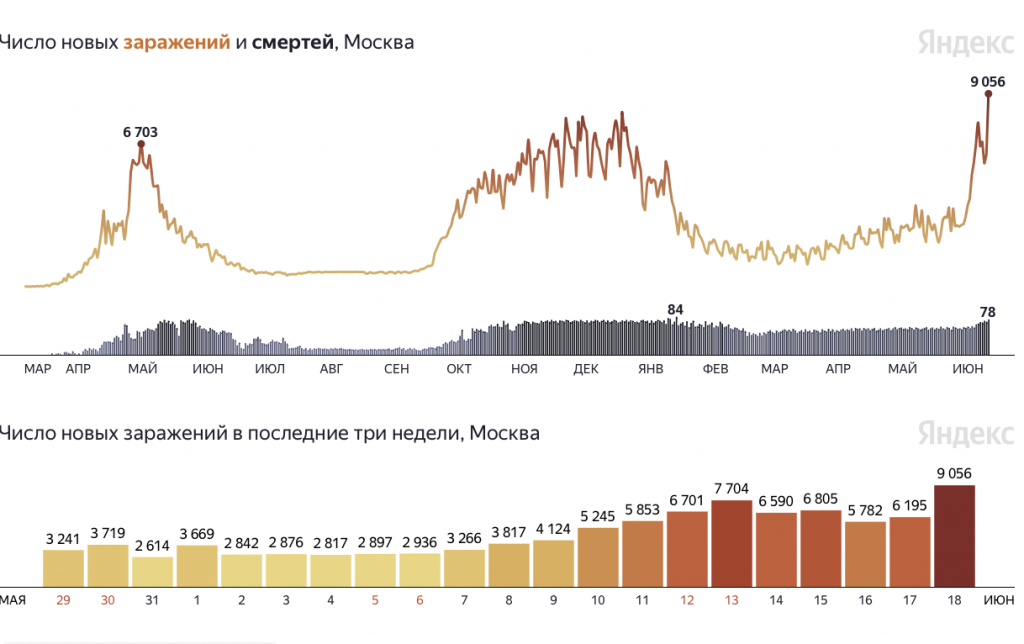 Certainly, the curve looks like we have a big rise ahead. When it started, the Mayor of Moscow, Sergey Sobyanin, extended a long weekend holiday to the full week of June 11-20, in hopes of curtailing the spike. Yesterday’s total is sharply higher than the week before it, but it takes a much longer time to establish the actual curve.

Nevertheless, Russia Today (RT) reports that the mayor is considering a brief period of a very “harsh” lockdown for Moscow to try to combat the spread of the illness, which is not reported as the original SARS-CoV-2 virus but a mutation of it that is significantly more virulent.

With fewer than 10% of residents vaccinated and hospital beds filling up as new Covid-19 variants spread, Moscow’s Mayor has warned that the Russian capital might be facing a short but very strict lockdown to control the virus.

“We are very close to much more severe – temporary, but severe – decisions on restrictions,” Sergey Sobyanin said on Thursday. He noted that 600 Covid-19 patients have been hospitalized over the past 48 hours, and that Moscow has about 17,000 beds dedicated to coronavirus patients to date. Soon that number will exceed 20,000, he added, and “no European city can afford this.”

“Once again I’ll say, these capabilities are not endless,” Sobyanin told reporters.

Last Friday, Sobyanin rolled out a series of restrictions after Moscow reported 6,701 positive tests in a 24-hour period, the highest number since January. Local employees were formally given a paid week off – dovetailing with Monday’s celebration of Russia Day – while employers were encouraged to send a third of the workforce home.

Playgrounds, children’s amusement rides in parks, and entertainment venues were shuttered, while restaurants, bars and nightclubs were forced to close at 11pm.

The measures don’t seem to have had the desired effect, however. On Thursday, Sobyanin said the new infections are mainly from new, more aggressive coronavirus variants, rather than the original Wuhan strain.

What may not be widely known is that while Russia has the first approved vaccine for the illness, Sputnik V, the penetration rate of the vaccination process in Russia is very low. Moscow has an estimated population of about 20 million people, and of that number, RT notes that 1.8 million have actually been vaccinated. The per day rate of vaccinations jumped by a factor of three on Thursday, but the mayor is concerned that this is nowhere near enough.

Sobyanin has already taken the unprecedented step of mandating vaccinations not just for healthcare workers, but employees in “public-facing” industries. Up to 60% of employees will have to get vaccinated in industries such as transportation, banking, food and beverage business, beauty salons and barbershops, theaters, museums, gyms, spas and massage parlors.

This move is a step or two shy of a true “mandate” of all Russian citizens getting vaccinated, which would probably run into many problems. Moscow is the epicenter of COVID-19 activity, by far the single most active place where the illness propagates, accounting for over one-third of the national count of new cases reported Thursday.

What may seem an interesting contrast is that the highest levels of the Russian government are against the notion of creating a national vaccination mandate, but the Mayor is creating mandates within the city of Moscow itself. Another piece from RT, dated two days earlier, describes this:

Moscow has become the first city in the world to make vaccination against coronavirus compulsory not just for healthcare workers, but for employees in a range of public-facing industries, including catering, transport and museums.

Officials in the Russian capital published the order on Wednesday, citing concerns over the worsening local epidemiological situation. Describing the spread of Covid-19 as “unfavorable,” the city’s top sanitary doctor, Elena Andreeva, warned that “there is an increase in the number of people who actively visit public places while sick,”attending venues and using mass transit systems.

As a result, 60% of workers in selected businesses and organizations will be required to be immunized. Sectors singled out include transport, food and beverage businesses, banks, as well as those working in beauty salons, theaters, museums, fitness clubs, spas, and massage parlors…

Around 1 in 10 Muscovites are estimated to have had both shots of the vaccine so far, statistics say. However, skepticism and distrust are thought to have limited the number of people booking appointments, despite the widespread availability of vaccines.

Speaking last week, President Vladimir Putin sought to reassure Russians, saying “not a single serious case of complications” has occurred during the nationwide roll-out of the vaccine. “There is nothing to be afraid of here.”

However, the Kremlin sought to downplay suggestions that the move amounts to a policy of forced vaccination, with Putin’s spokesman, Dmitry Peskov, saying that compulsory immunization isn’t even a question to be considered. Instead, it appears that the rule change simply regulates how many unvaccinated employees can work in selected industries.

The move will raise questions over whether staff will be pressured into receiving a shot, and what can be considered mandatory vaccination.

Spinoffs of this order from the Mayor created a lot of fuss, particularly among Americans who live and work in Moscow, largely motivated by the incredible political dimension COVID-19 regulations took on in the United States. While the Russian Federation is generally not polarized about this issue, the country has also deliberately avoided any sort of mandate for vaccination. With so many unknowns prevalent about the behavior of this America-funded, Chinese-made synthetic virus, it seems apparent that we are moving into just another chapter of this exhausting story.

It further points out one of the great failures in messaging about the virus and its control: In almost all of the world’s nations, the response to the virus was extremely authoritarian, especially in the United States. One might think Russia is an authoritarian country, but the real horror stories about people’s lives getting controlled did not come from here. While there are certainly differences in concept about how the Russian citizen views himself and his relations or obligations to his society contrasted with the American view, Russia’s approach to much of this crisis has been with far more emphasis on personal liberty than Gretchen Whitmer’s or Gavin Newsom’s for example.

The other glaring deficiency in messaging is from the leaders of Russia’s major religious groups. Orthodox Christianity is by far the leading religion in the nation, and it is a religion taken very seriously by many of its adherents. Yet, the leaders of the Church here have not given proper attention to the issue of the ethics of the vaccine, how to deal with the fact that HEK293 cells, believed to be from an aborted fetus, are in the vaccine and given to a group of believers who believe any sort of connection to abortion is supporting this horrific practice. No one has addressed this at a widespread public level. It is understood that a number of members of the Church hierarchy have received vaccination, but the silence about it only adds doubt to the situation, this all the more compounded by very holy elders within the Church in Russia and other countries’ unanimous consensus that the virus itself is blown out of proportion in terms of its severity, and that vaccination is as dangerous for the soul as anything in modern times could ever be. Similar questions almost certainly exist across Russia’s Jewish, Islamic and Buddhist communities.

Finally, while the virus is certainly making people very sick and killing some, one wonders how severe this pandemic is when we are looking at twenty to thirty thousand new cases a day in a country with 144 million people, or in Moscow’s case, nine or ten thousand a day against a city of 20 million. How many people also caught cold yesterday? How does this compare?

While the Russian Federation’s people are certainly more “community” minded than Americans are, the lack of really honest messaging is taking a toll. If the virus is truly dangerous, this will get a lot of people killed. If it is not the behemoth the press makes it out to be, then it brings other problems.

We would hope for real honest disclosure on this matter, here in Russia and of course, in every nation around the world. If people truly matter, we cannot afford to be any less than totally and brutally honest.

Well, I check Tass almost everyday in my news morning review, and, until the Geneva Summit, there was an amost fixed number of around 9000 Covid-19 cases in Russia, leading one to consider that this infection could have become endemic in Russia, independently of the vaccinations which in Russia, in harsh contrast with the whole West, had not been applied ,masively, and that the Russian were taking in low numbers as they have not been submitted to such harassment ( telephonic, through media broadcasting 24/7 fro months, and at labor level..) Western citizens have been so far… All of a… Read more »

The case taking place with airliners pilots lead to think that the ultimate goal was ending air travel fro the ages to come, since now who would venture taking a flight driven by a vaccinated pilot, adding to the usual flying risks, a new one implying the pilot indisdisposition…to the extent that i read it will be mandatory that in the cabin they travel one vaccinated and one unvaccinated pilot…just in case after the recent round of deaths… Will we be running this same fortune when we are on the chirofan, due the current mandatory vacciantions for all health personel,… Read more »

Russia takes a progressive standpoint on most international issues – it is respected for its usually honest and straight forward positions. However it is found wanting on this one. There are those people behind the scenes, the elite – the wealthy of present day Russia – a part of the group surrounding Putin who want to play this WHO game, a dishonest game which disrespects science and supports big-business. In this regard, Belarus [and Sweden] have been two much more honest and open countries in this regard. I have a great deal of respect for Putin, but in this regard… Read more » 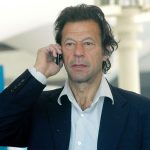 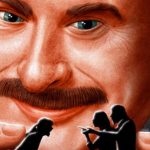