Russia’s fleet of icebreakers and Arctic capable ships have a unique ability to transport goods from Northern Europe to East Asia. During the Eastern Economic Forum, Vladimir Putin held talks with South Korean President Moon Jae-in about the possibility of a free trade agreement between Seoul and the Russian led Eurasian Economic Union.

While pipeline gas is almost always a cheaper option than shipments of liquefied natural gas, because no gas pipeline yet exists connecting South Korea to a gas producer (Russia for example), LNG remains the most viable option for Seoul. That being said, the possibility of a Russian built pipeline into South Korea is possible, but this will take time to build. Furthermore, such a project could only happen with the consent of North Korea, something which may happen but not immediately as Pyongyang’s representatives in Russia indicated yesterday.

READ MORE: North Korea supports economic ties with Russia and South Korea, but not until a later date

Because of this, South Korea needs LNG shipments and Russia looks to make a deal to ship LNG to South Korea and other Asia-Pacific nations in need of supplies.

“I want to congratulate you on this great new accomplishment — the laying of four high ice class supply vessels. They will be made (to fulfill the) order of (Russian energy giant) Rosneft and will strengthen the capacity of the company and of the entire domestic fuel and energy sector, will promote the development of the Northern Sea Route, an extremely important project for the whole country… And not just for the country… Almost all countries in the (Asia-Pacific) region are showing interest in it”.

In addition to energy supplies, regular shipping routes over the Arctic could help connect East Asia through Eurasia to North Europe, thus creating a new route for the expedited shipment of assorted goods across one of the world’s key trading routes.

In recent months, China has also expressed interests in utilising Russia’s arctic shipping routes in conjunction with One Belt–One Road. 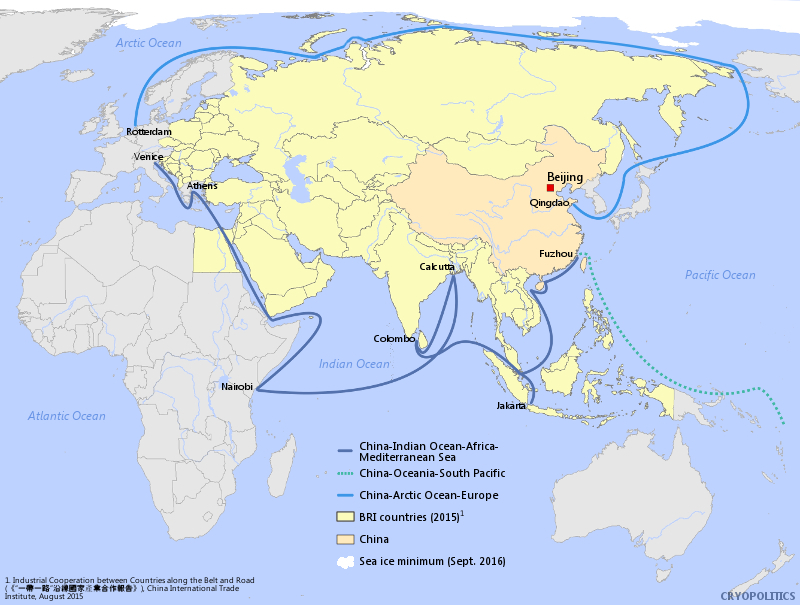 Russia’s technological and seafaring mastery of icy waters holds an important key to expanding trade between Asia and Europe and President Putin is at the forefront of spearheading such initiatives both from a technological and political perspective.

The Western “sanctions” miscalculation: Instead of turning West, Russia has turned East. Who are now the losers? EU and first of them, Germany. Bien fait pour leurs guelues. That will teach them to blindly follow the Washington dictates.

One assumes the European Union and its members are watching, wondering whether they bet on the wrong horse in the Ukraine coup. NATO must be a bit worried about its continuing relevance. All of which might result in more aggressive United States military posturing.

The Obama/Clinton failed and costly ($5Bill) scheme to overthrow the pro-Russian Ukrainian president in order to deny Russia, Crimea and hence Sevastopol, led to a series of disastrous American decisions. One after another, using the Saudis to force down the price of oil to punish Russia (a page out of Reagan’s playbook), and then as part of the bargain having to support them in the destruction of Syria, leading in part to the formation of ISIS, American foreign policy has been a disaster. The current anti-Russian attitude in Washington is a result of the Obama/Clinton friendly deep state maneuverings, and… Read more »

” in all likelihood ending in a shooting war with China”

If the US regime under ANY president tries that they will not only be up against the military of China but at the same time against RUSSIA and probably Iran who have mutual defense agreements with China! NO US military, would be stupid enough to try to take on all 3 at once.

All they can try to do is weaken China….which in itself is a losing operation.

NO US military, would be stupid enough

LOL, you have a good point!

I think Russia just blew a giant hole in the US regimes “Pivot to Asia” with its own!!!