One thing the individual can do is resist, and when the majority of the population decides to grind the wheels the engine comes to a halt

The sum of all fears for the average Russian has just been averted. The large packet of totalitarian answers to a problem of questionable magnitude has been booted from the State Duma. There has been an air of dread amongst the populace who were waiting to see if nationwide QR-code legislation would make it into law destroying their lives and businesses to separate those vaccinated from plague ridden riff raff. There was an expectation that some sort of Hegelian Dialectic gamesmanship would get a watered down, but still crushing version of this system passed. Thankfully for the sake of the Russian economy and sanity itself this is now not to be. This decision to completely bail on a QR Code apartheid not only comes at an interesting moment in history but has great relevance for Russia itself and issues related to Covid-19 on a global scale.

Why was the public so concerned over this, shouldn’t we fight Covid-19?

There was a sort of test run of this QR code system in Moscow. It didn’t last very long and from the onset it was clear that the Russian masses were not going to let laws get in the way of their daily activities as is tradition. Any filtration processes at subway entrances were a joke that caused a complete transport collapse and lasted around 48 hours in total. The boiled down version of this idea mostly applied to restaurants which were forced to check guests for having a vaccination code. There was much resistance to this, and certain crafty restaurateurs saw the value of convincing the government that they were enforcing QR code restrictions while just letting anyone through the door anyways. After Putin came back from one of his trips abroad, this system, which was ever so critical for our safety, vanished into thin air, but it certainly left a bad taste in the public’s mouth and many bankrupt restaurants.

Later a similar project was put into place in Tatarstan with even more violently resisted results. Perhaps if this were to have happened on a national level in one clean sweep it could have broken the Russian economy. The QR madness in Moscow/Tatarstan from St. Petersburg to Vladivostok would have been vastly more devastating than all of Washington’s sanctions packages combined. Perhaps it was a wise choice for a certain President to keep this a “States’ Rights” issue and repeatedly reaffirm that vaccination is a personal choice.

So why did this happen now?

People have been asking me for quite some time about the reality of anti-Covid measures here in Russia and what the government is doing. The problem is that to understand today’s Russia you simply cannot think of the state as a monolithic block. There is no Putin dictatorship under a crushing cult of personality with all roads to power leading to an often shirtless God-Emperor. Russia is not the Borg Cube.

There has been a massive unseen war going on behind the walls of government institutions over the pandemic, which explains why Covid policies here have come and gone seemingly at random in various regions. Even at the macro level, there has been a soft push (with the threat of a hard push) for vaccination and yet Putin himself a few weeks ago said something very important about the Omicron Strain…

“Although they say it (Omicron) is not so harmful, some experts even call it live vaccination. <…> Let’s not get ahead of ourselves”.

In political terms this seemed like a big call to just let the whole Covid situation go while having the ability to retract this statement in a few weeks if necessary. It is also a very Russian answer to a problem for things to just magically work themselves out on their own. For those conspiratorially minded it is interesting that this self-vaccinating Omicron Variant of Covid-19 that Putin brought to public attention is accused of being artificially created by the Mainstream Media. This is some dark food for thought for sure.

Going further into the realm of conspiracy, there could be a connection between the absolute failure of negotiations between Russia and the U.S. and finally dropping this QR code legislation. Russia got nothing that it wanted from the Globalists so maybe the Globalists are going to get nothing from Russia? Moscow’s participation in the big school play may be over for good.

What does this mean for Russia?

Both sides of the Covid fight in Russia have done a good job of building up enemy lists and a deep seeded hatred for the other. When one side wins in this type of scenario we can all guess what is going to happen next. There could be some major restructuring and firings coming up within the next year as revenge time is surely nigh.

For the Russian masses this will show that being obstinate pays off. Very often people of questionable intelligence vastly overestimate the ability of the individual to make change in society, but one thing the individual can do is resist, and when the majority of the population decides to grind the wheels the engine comes to a halt. The more collective mindset of Russians has saved the day and the Russian cultural traits of complete disregard for rules and brutal obstinacy have been revalidated for another generation.

What does this mean in the context of Covid-19 globally?

There is now a major nation that has essentially given up on anti-Covid measures. It is also a global player with some significant media and internet presence that can advertise this fact. While Australians are being beaten and gassed for not wearing a mask at some bar, Russia will probably say to the world how great it is that they defeated Covid using measures that had a minimal impact on the rights of citizens and now everything is back to the Old Normal. They may even broadcast the whole notion that Omicron is a passive solution to the problem and that there is no threat.

This will make Russia become even more attractive to Western Conservatives and we should expect a wave of anti-vaxxer immigration to the land of bears and snow. You may scoff at this notion, but when one gets emails about this issue daily, things look a lot different.

But of course, if Russia completely drops its war on Covid, that will mean that Russians will suddenly present a “danger” to the populations of foreign nations and may be banned from traveling to most if not all of the West regardless of vaccination. And going to Russia as a Westerner could mean the death of your travel future as you’ve been tainted by their lack of anti-Covid measures. That may sound insane but it is bureaucratically logical and a natural next step in the ever devolving Monopolar vs. Multipolar conflict that we are all in against our will. 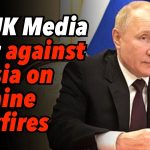