Russian President Vladimir Putin will meet shortly with Egyptian President Abdel Fattah el-Sisi in Cairo to discuss a host of issues, including the recent surge in tensions in Palestine.

However, prior to his scheduled visit to Egypt, the Russian President visited Syria. At Hmeymim Airbase Latakia Governorate, President Putin told Russian troops to prepare for a gradual withdrawal from Syria as their mission has been almost totally fulfilled.

Putin did however warn that if terrorists “rear their heads”, Russia would carry out new airstrikes the likes of which “they’ve never seen”.

While Russia will retain a presence in Syria for decades to come after, in line with an agreement which Moscow and Damascus signed in July, Russia is shifting its focus from that of a war footing to that of a peacetime presence. Implicit in this is Russia’s role as the de-facto lead power broker at the Astana Peace Process, which will also see Iran and Turkey playing significant roles.

However, Putin could have made such an announcement from Moscow and while a surprise visit in front of Russian troops in Syria is a clear sign of the Russian leader’s commitment to the morale of his fighting forces, there is a far wider geo-political significance.

The US recently released a statement which essentially claimed that Russia was not fighting terrorism in Syria, a claim which is factually ludicrous but which nevertheless, aims to justify the continued illegal US presence in Syria, as well as to deceive the US public in part of a wider Russophobic disinformation campaign.

Russia has made very clear statements in recent weeks, indicating that Moscow views any further US involvement in Syria as “counterproductive”.

Russia has in fact played the largest role of any international partner to Syria in the war against terrorism, while the US has done little apart from reducing the city of Raqqa to rubble while killing hundreds of civilians, all the while, airlifting ISIS commanders, ostensibly to safety.

The Russian message to the United States therefore is simple. It can be summarised as follows:

‘We won—you lost. Your only reason for ever being in Syria was to foment regime change, but in reality President Bashar al-Assad will not only remain President of Syria,  but his government will play a crucial role in the forthcoming peace process and post-war settlement’

Vladimir Putin who was welcomed during his surprise visit by President al-Assad, merely confirms that Russia views the President of Syria as an essential partner for peace, while the US still tries to undermine his government and leadership. 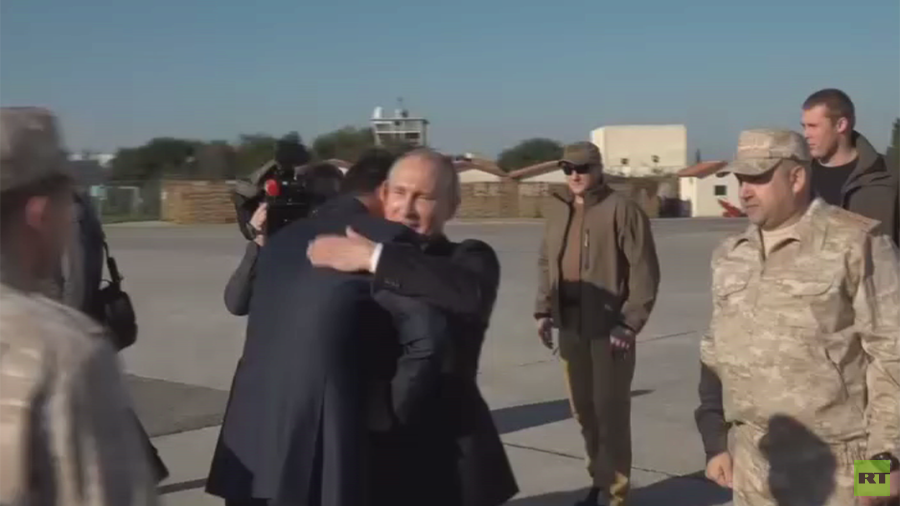 The message the visit sends to regional players, is much more complex.

Palestine has all but appointed Russia as the new de-facto power-broker for peace with the Israelis. Russia’s position in the Israel-Palestine conflict is seen as genuine and respectful from the Palestinian perspective, while Israel continues to expand its trading relations with Russia. In this sense, Russia has always been a natural partner for peace in the decades long conflict.

Now though, with Palestine openly stating that the US is not a neutral power and with the Palestinian ambassador to Russia making the clear suggestion that Moscow will be turned to as the likely future broker, Russia is making one thing clear to Tel Aviv: Syria is not a bargaining chip.

Israeli leader Benjamin Netanyahu enjoys a personal friendship with Vladimir Putin, however, unlike his relationship with Donald Trump where the latter is subservient to Israeli interests, Putin remains a Russian leader who is not overly wooed by any international partner.

With Israeli publicly fuming about the fact that its long-time Syrian rival has won the war, it is not beyond the realm of conceivable that Tel Aviv would try and convince Russia to abandon Syria in exchange for some sort of deal with Palestine. While most in Israeli will realise that such a “deal” would be a long-shot, President Putin has preempted this move by showing that Russia is a partner with Syria in both war and peace, as Russia and the USSR have been for decades, dating to a time when Soviet-Israel relations were very poor.

Russia’s engagement on the Palestine-Israel conflict will continue to take a slow but firm approach, wherein all regional players are listened to, but none are conceded to.

President Putin’s meeting with the Egyptian President makes this attitude all the more clear. Israel has previously tried to lobby Russia to expunge Iran from Syria, a claim clearly rejected by Russian Foreign Minister Sergey Lavrov, as Russia refuses to meddle in the policy making of any sovereign nation.

The message to both the United States and Israel is that Russia’s legal partnerships are not for sale, but that Russia remains ready to discuss legitimate peace deals with any and all Middle Eastern states. This respectful approach has already proven to be vastly more successful than the zero-sum mentality of the United States which has only resulted in bloodshed whether in Iraq, Syria, Palestine, Egypt, Libya and beyond.