Putin fielded a variety of questions from domestic press including questions on Ukraine, climate change, the Russian economy, foreign agents, and the Trump impeachment hoax.

Russian President Vladimir Putin fielded questions at his annual end-of-year news conference in Moscow on Thursday, and while Putin usually talks about domestic issues, in this conference he was bombarded with questions on foreign policy and relations with Washington.

Russian President Vladimir #Putin holds its 15th annual press conference since 2001 in Moscow today. Over 1895 correspondents from all over the world are invited. Click the short video to see how reporters attempt to gain an opportunity to raise their questions. #Russia pic.twitter.com/quTV8Mg9cC

The event began around 4 am est. and can last for several hours.Notably, around 5 am est., Putin was asked a series of questions about his thoughts on the impeachment proceedings of President Trump.

In response, Putin denounced the impeachment proceedings as “spurious” and said the US Senate is unlikely to remove Trump. He said Trump’s presidency is far from over as Republican lawmakers “are unlikely to want to drive out of power a representative of their own party.”

Putin on #Trump impeachment: US President unlikely to be voted out of office#PutinPresser

Putin said the Democratic push for impeachment is “part of the ongoing domestic political battle” in Washington.

As expected, late on Wednesday, the US House voted to impeach Trump, who joins Andrew Johnson and Bill Clinton as the only presidents to be impeached since the adoption of the Constitution in 1788.)

And the result after 219 speakers from both sides of the aisle, as most expected, all Republicans voted against impeachment, all Democrats except three voted for the first article of impeachment… 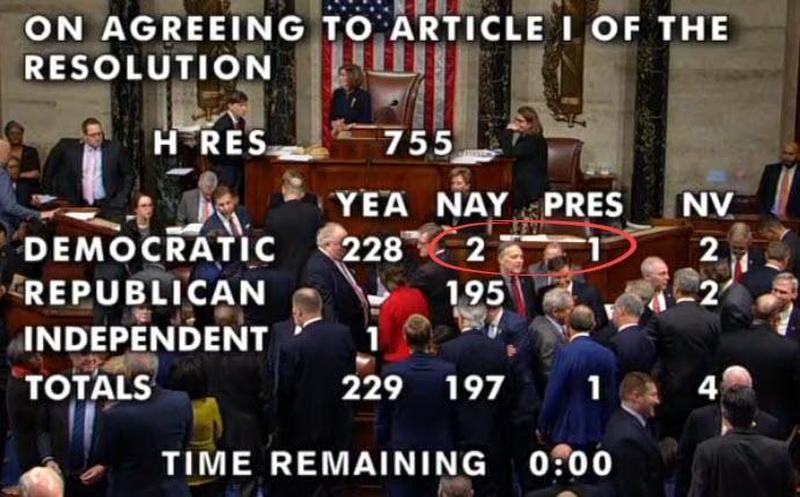 All Republicans voted against impeachment, all Democrats except four voted for the second article of impeachment… 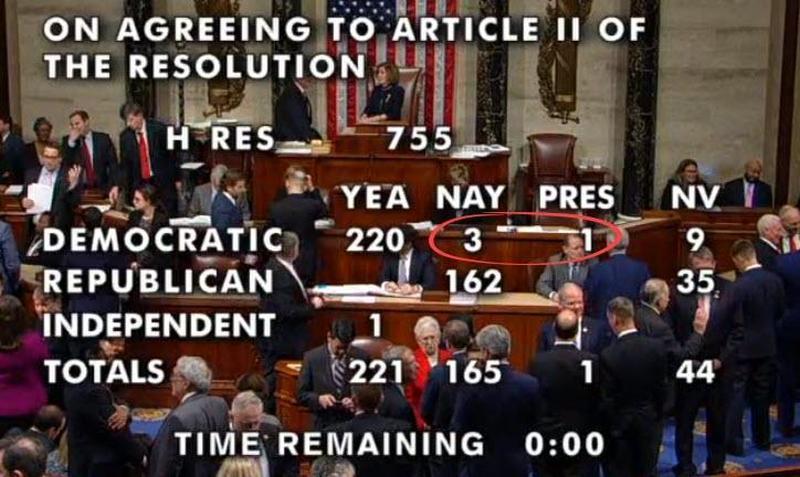 As to what happens next, we go to Constitution: A president who has been impeached by the House can still serve as president. It’s up to the Senate to hold a trial to decide whether to remove him from office. And as everyone knows by now, in the Senate the impeachment drive will die, the only question when will Nancy Pelosi hand over the impeachment process to the upper chamber of Congress.

Pressure Vessel about to Burst

Pressure on Ukraine…..to uncover Biden’s dirty dealings, along with the rest of Obama’s little helpers? You bet. The more, the better.

If President Bad Hair had done something truly egregious, some members of his own party would have favored impeachment, as was the case with Mr. Nixon.

There’s plenty to choose from. Trump is disliked by Dems and some Repubs, but the contest between the Republicans and Democrats is phony or they would have zeroed in on any number of transgressions of the awful Donald Trump. And that explains why the Repubs who don’t like Trump didn’t suggest that very thing. They are all protecting, at the end of the day, the entire political class, just as Alexander had to admit (going against his own narrative of ‘anti crime and anti regime change Trump good’ and ‘anti Trump deep State bad.)

As shown in this article, there is a key aspect to the entire anti-Russia/pro-Ukraine story that has received no coverage by the mainstream media:

The West’s blanket condemnation of Russia and its so-called annexation of the Crimean peninsula in 2014 would suggest that more of us need to educate ourselves on the history of Russia and Crimea in particular before we whole heartedly swallow the narrative that our political leaders and media foist on us.

The ‘hidden evidence’ that has Giuliani salivating at the bit:
https://www.strategic-culture.org/news/2019/12/18/hidden-evidence-regarding-ukrainegate/

That was a great press conference, Vladimir Putin is such a smart guy.

Whatever the DEMS dream up is sure to turn into a nightmare. REPUGS are on another REM cycle but pretty much end up the same.

If I were Trump, the first witness on my list would be (former) Prosecutor Victor Shokin, who had finished the Burisma investigation and was about to prosecute it. There is no more valuable witness than the dude that Joe Biden had fired so Burisma would keep the graft flowing.

I watched this ep on Bitchute. The above article leaves out a lengthy discussion that Alex and Alexander have about the Russian foreign agent law and the controversy surrounding that and about the concerns some have about Russia creating a firewall like China did. I was looking for show notes here (I don’t know exactly where on Putin’s website, under ‘documents’, to find that law but would like to) and don’t see any. Maybe I’m blind. Also, The Atlantic (bird cage liner, but put that aside) carried an article that looked at a recent Russian law that carried penalties for… Read more »