“The Philadelphia Inquirer published a headline in Tuesday’s edition that was deeply offensive. We should not have printed it. We’re sorry…”

Stan Wischnowski, the lead editor of The Philadelphia Inquirer, resigned on Saturday over a headline (dated June 2) titled “Buildings Matter, Too,” which detailed the destructive nature of social unrest on the city’s local economy over the police killing of unarmed black man George Floyd, reported The New York Times.

The headline drew immediate backlash from readers and staffers. The Inquirer issued an apology for a “horribly wrong” decision to publish the headline about looting and burning down buildings on the margins of protests. In its apology piece, The Inquirer said:

“The Philadelphia Inquirer published a headline in Tuesday’s edition that was deeply offensive. We should not have printed it. We’re sorry, and regret that we did. We also know that an apology on its own is not sufficient.

“The headline accompanied a story on the future of Philadelphia’s buildings and civic infrastructure in the aftermath of this week’s protests. The headline offensively riffed on the Black Lives Matter movement and suggested an equivalence between the loss of buildings and the lives of black Americans. That is unacceptable.”

The apology also said the comparison between the destruction of private/public property and the lives of black folks was not intended.

“While no such comparison was intended, intent is ultimately irrelevant. An editor’s attempt to capture a columnist’s nuanced argument in a few words went horribly wrong, and the resulting hurt and anger are plain.”

Dozens of the Inquirer’s 210-member editorial staff called out Wednesday, one day after the headline was posted. Black staff members were particularly angered by the headline and condemned senior editors for allowing it to be published. This is what they said in an open letter to management:

Publisher and CEO Lisa Hughes told the editorial staff in a memo that the headline was “offensive and inappropriate.”

Hughes released a statement on Saturday that said Wischnowski “has decided to step down as senior vice president and executive editor.” She said the paper is searching for a successor:

“We will use this moment to evaluate the organizational structure and processes of the newsroom, assess what we need, and look both internally and externally for a seasoned leader who embodies our values, embraces our shared strategy, and understands the diversity of the communities we serve.” 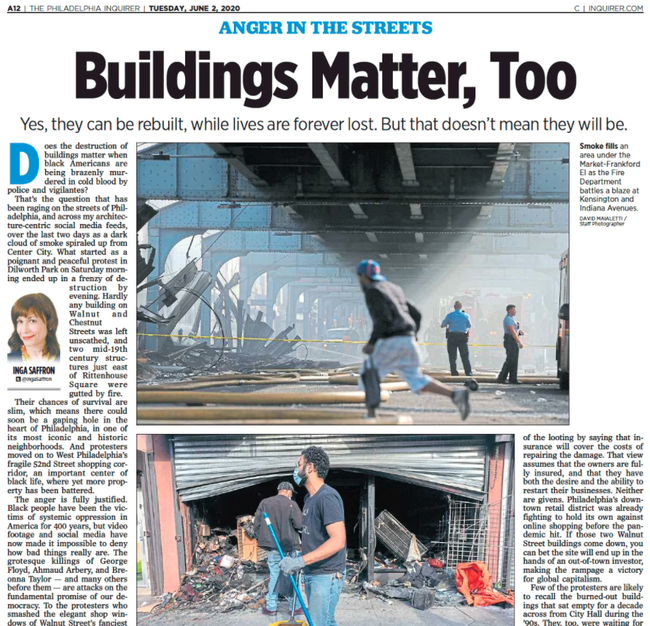 What the headline was referring to:

Breaking: Multiple police cars have been set on fire by rioters in Philadelphia. Rioters are attempting to break into City Hall. pic.twitter.com/F4Y9mFMIcV

In an upside-down world, a newspaper can’t even question the legitimacy of protesters looting and burning buildings (and even in some cases using explosives) in its reporting city without backlash.