During the past week, the world has looked on as the now two-year long COVID-19 mainstream media narrative collapsed almost instantaneously.

In timing that cannot be described as anything less than suspect, in the same week that the World Economic Forum held its virtual Davos Agenda event, Ireland and Britain announced the sudden and immediate ending of virtually all Covid measures and the World Health Organisation called for the end of Covid-related travel restrictions, with the organisation also stating that the end of the ‘Pandemic’ may be in sight, in stark contrast to a recent announcement that such a prediction was premature.

With the theme of the World Economic Forum’s 2022 annual summit meeting, due to be held in May and the first in-person meeting of the forum since 2019, being ‘Working Together, Restoring Trust’ the optimistic among us may say that there has been an acceptance amongst the global elite that the growing awareness worldwide of the corporate power-grab over public life that the past two years has entailed, as well as the steady march towards a digital ID system as envisaged in Klaus Schwab’s concept of the fourth industrial revolution via the use of vaccine passports, has become so widespread that it is no longer feasible to continue the current COVID-19 media narrative.

However, the sudden dropping of COVID-19 by the corporate media also presents the opportune moment to immediately switch its focus to something else – a possibly imminent false flag attack in Ukraine, used as a pretext for the Western-backed Kiev government to launch an attack on the breakaway pro-Russian republics of Donetsk and Luhansk in the east of the country, thus triggering an armed conflict between Ukraine and Moscow, one that has the strong possibility for worldwide ramifications.

Since the end of November, the Western media, in lockstep, has promoted the narrative that Russia is planning an ‘imminent’ military invasion of its smaller Western neighbour – with Kiev having come under control of the US and EU backed governments of Petro Poroshenko and Volodymyr Zelensky since the 2014 CIA and MI6-orchestrated Euromaidan colour revolution was launched in response to then-President Viktor Yanukovych’s November 2013 to suspend an EU trade deal in favour of pursuing closer ties with Moscow.

Despite the only ‘evidence’ offered so far over the past two months of such an incursion being the legitimate movement of Russian troops within Russia’s own borders, the Neocon-influenced Western media still determinedly vows that a Russian invasion of Ukraine is only a matter of days away from taking place – in a manner not dissimilar to their previous assertions that Saddam Hussein had the capability to launch weapons of mass destruction within 45 minutes in the run-up to the 2003 US-led invasion of Iraq.

The claims of a Russian invasion of Ukraine also come at a time of wider tensions in Eastern Europe with Russian President Vladimir Putin, alongside his Belarusian counterpart and sole European ally Alexander Lukashenko, being accused of attempting to destabilise the European Union via a build-up of African and Middle Eastern migrants on the Belarus-Poland border – the fact that many of said migrants are fleeing the wars and colour revolutions imposed on both regions by the US-NATO hegemony being conveniently ignored by the Western media.

Should a false flag attack be launched soon in order to trigger a conflict between Moscow and Kiev however, it would be a tactic with recent previous usage by the regime change lobby which, like a theoretical war between Russia and Ukraine, also almost resulted in a wider armed confrontation between Moscow and NATO – In 2017 and 2018, two chemical attacks where launched against the Syrian town and Khan Shaykhun and the city of Douma respectively, both attacks being blamed by the West on the Moscow-allied government of Bashar al-Assad and both resulting in the US launching cruise missile and air strikes against Syrian government targets – just stopping short of a full-scale military intervention.

Indeed the use of a chemical weapons provocation was outlined as such by Russian Defense Minister Sergey Shoigu only last month – a false flag attack that the Western mainstream media, with its sudden dropping of the COVID-19 narrative, may soon be focusing its attention on instead.

Here is an article that looks at how Americans feel about a war with Russia:

The troops that Russia is sending to its border with Ukraine are still in Russian territory and as long as they remain on their side of the border region, it really is none of Washington’s business.

The ‘Pandemic’ narrative is certainly not over, and will be brought back when they see fit, with their bogus Polymerase chain reaction test, for their rebranded Common Cold and Influenza, now known as Omicron and Delta.  Jonas Salk, who is known a ‘The Father of the Vaccine’, was instrumental in creation of the Polio Vaccine, and Salk’s inactivated polio vaccine came into use in 1955. He wrote the book ‘The Survival of the Wisest’ published in 1973, in which he put forward the proposition, that RNA should be used in Vaccines, to exterminate the vast majority of the Worlds Population.… Read more »

Jonas Salk, rather than patenting the polio vaccine he developed and thereby earning billions of dollars, gave it away free as a present to humanity.

“…a present to humanity.”

for a disease that was naturally going extinct, until this Luciferian developed vaccine Polio variants of the disease.

Why don’t you read ‘The Survival of the Wisest’ by Jonas Salk, which can be downloaded on pdf for free, before you literally play Devil’s advocate, for this demonic fiend.

The only other man in the 20th Century, with such demonic hatred for Humanity as Jonas Salk had, was Ilya Ehrenburg, the Soviet Jewish propagandist, whose evil propaganda was responsible for the rape and murder, of millions of German women and children.

“Ireland and Britain announced the sudden and immediate ending of virtually all Covid measures...” This is the narrative they sold you Gavin O’Reilly, but as an ostensible “Journalist”, you should take their narratives with a pinch of salt, but you swallowed their lies, Hook, Line & Sinker! Very little has changed in Ireland, as we still need to wear the Face Masks on Public Transport, and all the Children in Primary Schools and Secondary Schools, still have to wear these diabolical masks all day long.  The tremendous psychological damage been inflicted on the Children, through these Mask mandates, is well… Read more » 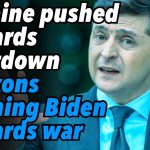