US Attorney Richard Donoghue asked a federal judge last month for permission to present a mountain of new evidence in the NXIVM sex-cult trial – including evidence of an “illegal scheme to exceed contribution limits to a presidential primary campaign,” in the “hopes of obtaining political influence to advance their own agenda,” according to a March court filing.

“At the suggestion of a political operative, who has since pleaded guilty to an unrelated New York state bribery charge also involving campaign contributions, the contributions were “bundled” and presented to the candidate at a fundraising event attended by conspirators,” the filing continues. 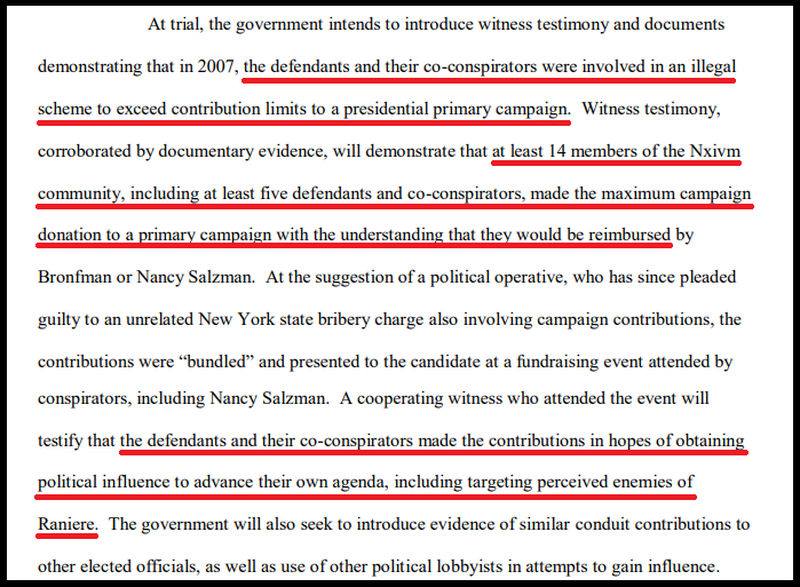 And whose “presidential primary campaign” did the group allegedly attempt to buy influence with?

None other than Hillary Rodham Clinton, according to former NXIVM publicist-turned-whistleblower Frank Parlato, who told Big League Politics “I was there, and I knew that the contributions were made by more than a dozen NXIVM members to Hillary Clinton’s presidential campaign.”

At present, the judge overseeing the case has not responded on the case docket.

Founded by accused pedophile Keith Raniere, NXIVM started out as a multi-level-marketing self-help business for people who wanted to “reach their potential” through various courses.

NXIVM’s Clinton connections have been known for some time

After being run out of Arkansas in the early ’90s by then-Governor Bill Clinton’s attorney general on charges of fraud and business deception, Raniere and NXIVM executives emerged a decade later only to donate $29,900 to Hillary Clinton’s 2006 presidential campaign a decade later. At least three NXIVM officials are (or were) “invitation-only” members of the Clinton Global Initiative, according to the New York Post.

Meanwhile, NXIVM’s ‘inner sanctum’ turns out to have been sex-cult known as ‘DOS’ – which Parletto says stands for “dominus obsequious sororium,” or “master over the slave women.”

Raniere’s inner cadre included Seagrams heiresses Clare and Sara bronfman, who joined NXIVM in 2002 and subsequently contributed $150 million of their inheritance to the organization, while Claire bought 80% of Wakaya island off the coast of Fiji for $47 million in 2016, according to Vanity Fair.

Female members of DOS – such as former Smallville actress Allison Mack, would procure women for Raniere – who required that prospective “slaves” upload compromising collateral into a Dropbox account. One such recruit-turned-coach was India Oxenberg – daughter of Dynasty actress Catherine Oxenberg, who met with prosecutors in New York in late 2017 to present evidence against Raniere.

Mack – who allegedly held the second-most-senior position in NXIVM, pleaded guilty earlier this month to racketeering charges and manipulating women into becoming sex slaves.”I believed Keith Raniere’s intentions were to help people, and I was wrong,” a tearful Mack told a Brooklyn judge. “I know I can and will be a better person,” she added.

Prior to his death, Clare and Sara’s father, Seagrams founder and former president of the World Jewish Congress Edgar Bronfman (whose funeral Hillary Clinton spoke at), told Vanity Fair of NXIVM “I think it’s a cult.”

A cult which tried to buy favor with Hillary Clinton, allegedly.

The photo! Is it Halloween already?

Just don’t ask about the skeletons in the closet or the voices from her attic.

I cannot help it, I love digging up skeletons. I published a detective novel in Germany “Tote tanzen nicht” (Societäts-Verlag, Frankfurt am Main 2006). Detective writers love skeletons in closets. It is a “déformation professionelle”.

It must be – doesn’t time fly when you’re enjoying watching Trump flush the USA down the sh*tter!.

Yes, Normski, the USA is resembling more and more a typical Trumpian “shithole country”. His words are so prophetic. Monsieur Donald Trump might not be an effective president but he is a born (or reborn) prophet.

Wizard Behind the Torn Curtain
Reply to  Olivia Kroth

Pretty sick stuff. Have I been missing something by treating women with honor and respect all my life?

Afterthought: Is it wrong of me to associate the Democratic Party with Nazi Germany’s homo-hetero-erotic fantasy excursions and extrapolations into a fixation with dominance through war? Sorry, the thought just popped into my head.

What! Hillary’s a women? I thought she was Steven Tyler in Drag.

Did I say I was treating H with honor and respect? Far as I’m concerned, her campaign platform was to don J Edgar’s pantyhose, while slapping his bent over arse with a rubber hose. The Podesta’s weren’t drawn to her campaign on politics alone, after all. The whole friggin’ party was an S&M cult. Meanwhile, the Repubs looked to be America’s version of the Taliban.

Fair point. I just assumed when you said respecting women you were being general :p 😀 As for a Nazi’s wet dream the Dems and Reps only differ in who they b*gger. Rep’s b*gger America, the Dems b*gger everyone else. Both are the two faces of the Gestapo that is the US elite.

Was that Hitlery’s plan for Libya – another slave-sex cult retreat for Dem insiders? Seems like another half-accomplished, half-baked plan from that bunch. Well, at least she got some cackles out of it.

Pence should hold a Congressional prayer-meeting and exorcise the devils out of Congress (but who’ll be left?). Then off to Libya to free the slaves and demand his weaponry back so he can sell it to the Saudis again.

And once again, nothing will happen and no one will be charged…..

I do declare…It’s probably just one of history’s serendipitous missteps that Charlie Manson didn’t end up a major figure in American politics.

Or Al Capone, or Frankenstein.

Manson was responsible for far less murders than most US politicians in office. Political war criminals in the West never receive punishment– on the contrary, they are usually rewarded.

listen,
True feelings are ghastly with unbelievers. Political correctness is control, Governments are using it against Christians. The equasion is Fascism. So Hillary Clinton arch Fascist, is a Demoncrat. She has her orders, from who, ?